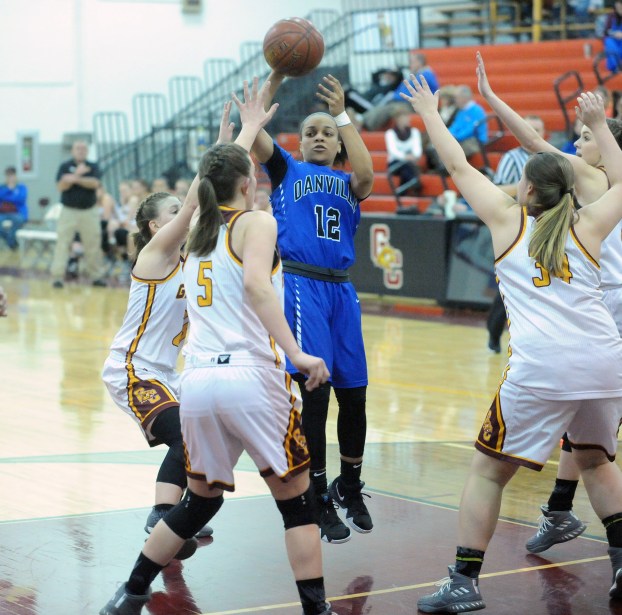 Danville girls get balanced scoring in win over Garrard County

LANCASTER — Danville head coach Clifford Berry liked what he got from his bench on Wednesday at Garrard County.

“They held a lead for once. That’s the biggest thing for us, that’s the challenge we put down before the game,” Berry said. “We take (Turner) off of the floor, can you all continue to play and hold the lead? And they did that. This was some of the most balanced scoring we’ve had all year. Carolina Gonzalez, Lara Akers, they’re growing into the scorers that we need them to be.”

Turner still finished as the leading scorer with 15 points, but Gonzalez (13 points) and Akers (10 points) were not far behind.

“We need this in a big game,” Berry said. “We need this against Lincoln or Boyle. It seems like they kind of back off in those games and then go hard in this one. I need them in the big games, and that’s a part of growing up. They’re learning how to do it every night.”

The Admirals led at halftime 28-17, and with Turner back on the court in the third quarter, exploded for 19 points to take a 47-24 lead after three.

“We came out flat after halftime,” Garrard head coach Scott Latham said. “It’s an 11 point game, you don’t have to get it all back on one possession. We wanted to get it down to five or six after the third quarter to try and be in it at the end. Instead, we had bad attitudes and couldn’t get it fixed. Then it’s too late. You can’t turn it over 20 times against good teams, and we did that tonight.”

Garrard’s offense struggled early in part due to three starters — Katy Pozzuto, Olivia Saylor and Morgan Day — not starting due to a “violation of team rules,” Latham said.

Offensively, Latham said he thought his team had the effort to succeed but could not execute.

“This game had nothing to do with our effort. Our effort was there,” he said. “We did a good job attacking the rim and getting to the free throw line, you’ve just got to make free throws, 9-of-27 is not going to cut it against anybody. There’s another difference in the ball game, you make half of those and now you’re looking at a real close game.”

Decision-making will be the focus for the Golden Lions on the offensive end as the season nears its end, Latham said.

“I think again, we’re so young, we’re panicked,” he said. “We know where to look but we don’t know where to go with the ball. Our decision-making has got to get better on the offensive side. Because we’re getting the shots that we want. We’ve just got to get there and do the little things: Jump stop, make a good pass. Little turnovers add up.”

For the Admirals, a 2-seed vs. 3-seed matchup against Boyle County is on the cards in the district tournament later this month. That’s their focus moving forward.

“We’re really playing for that Boyle County game, that first district game,” Berry said. “We’re trying to keep everybody healthy, we had three sitting at home tonight with the flu. We’re beat up but they’re showing a lot of heart and they’re fighting through it. We’re really trying to get ready for that district game, we’ve got Marion County and Wayne coming up, Lincoln Friday. But seeding is already set, we’ve just got to go out there and play and show that we can win a big game.”

STANFORD — There was no doubt that the victory meant a great deal to Ryan Young, but it was a... read more