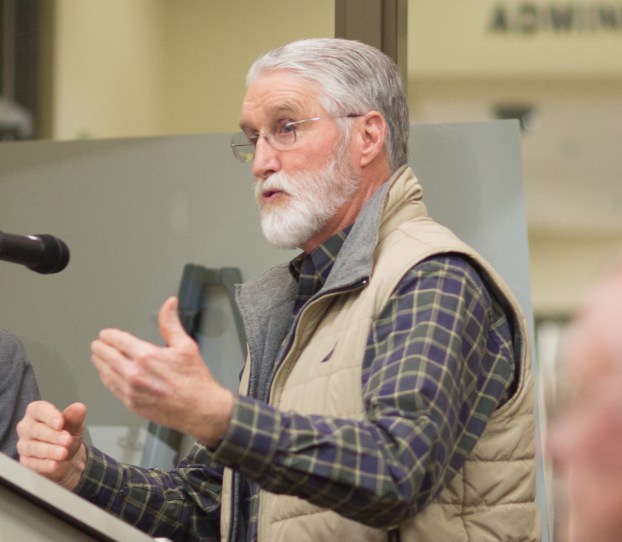 Joedy Sharpe of Joedy Sharpe Construction Company speaks to members of the Danville-Boyle County Planning and Zoning Commission Wednesday. After commissioners approved an agreement with him to finish roads in the Hunt Farm subdivision, Sharpe thanked commissioners for tackling the issue. (Photo by Ben Kleppinger)

An agreement has been reached that should allow for roads to be completed in the Hunt Farm subdivision, more than 10 years after development of the land began.

Danville-Boyle County Planning and Zoning agreed Wednesday to a “settlement agreement” with Joedy Sharpe Construction Company that will not require P&Z to spend any of its own funds to finish the subdivision roads and sidewalks. 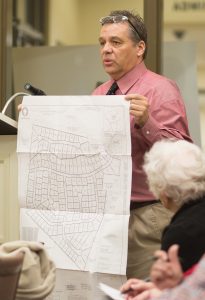 The P&Z Commission also voted to rescind a preliminary plat for the Hunt Farm subdivision. That means no further sections of the 149-lot neighborhood can be developed until the existing sections’ roads and sidewalks are completed to P&Z’s liking and the commission re-approves a new preliminary plat.

Steve Hunter, director of P&Z, told commissioners the original preliminary plat for Hunt Farm had been approved in 2006. The developer, Joedy Sharpe, then got approval for three initial phases of construction and took out a bond in 2007 for $52,668 to ensure that the roads and sidewalks would be completed and the subdivision brought up to code, he said.

For five years, P&Z renewed Sharpe’s bond — a letter of credit — giving Sharpe more time to finish the roads. In 2011, P&Z then cashed the bond and put the cash into a special holding account. Hunter said P&Z’s standard procedure is to allow five annual renewals of a bond before cashing it out.

Since 2011, the money hasn’t gone anywhere, except for small annual fees charged by P&Z that reduced the value by close to $1,000. Hunter said those fees have since been eliminated by P&Z.

P&Z can cash letters of credit and use the money to complete unfinished subdivisions. Hunter said in his experience as a planning commission director, he has cashed numerous bonds and even completed a few subdivisions with that money. But “I’ve never finished a project where the developer is still around and selling lots,” he said.

Typically, P&Z would use a letter of credit to complete a subdivision when a developer has gone bankrupt or otherwise fallen off the radar, Hunter said.

In this case, Sharpe still owns the land and is still selling lots in the Hunt Farm subdivision. Sharpe sent a letter to P&Z in 2016 arguing that P&Z took responsibility to complete the subdivision roads by cashing his letter of credit. Hunter has disputed that argument and said state law is in P&Z’s corner — it’s allowed to cash a letter of credit without relieving a developer of its responsibility.

“That is why we have somewhat of a problem — we really never had enough money back in ’06, and when we called in ’11, it clearly was not enough money to finish it,” Hunter said.

In order to put final surface on all the Hunt Farm roads and add sidewalks to both sides of the road, as the construction plan for the subdivision calls for, Hunter said a rough estimate comes in at $69,500 — $19,600 for surfacing the roads and $49,900. That’s around $18,000 more than P&Z has from the letter of credit.

In order to understand what happened with the Hunt Farm development, it’s necessary to understand how the Great Recession that began in 2008 affected development in Boyle County, said Stephen Dexter, an attorney representing Sharpe before the P&Z Commission.

During that stretch of time, only three homes were built in Hunt Farm, Dexter said.

“Due to these harsh economic conditions, the development plans were delayed,” Dexter said. “I think a reasonable business person — any reasonable person — would have made a similar decision. It was unclear whether the conditions during the Great Recession would improve and when.”

But while many developers “went belly-up” during the recession, Sharpe did not. And he provided things like snow removal for residents in Hunt Farm since the roads were not finished and could not be brought into the county road system, Dexter said.

Sharpe wants the roads and sidewalks completed, just like local government officials and residents in the subdivision, Dexter said.

Dexter proposed a “settlement agreement” with P&Z. The agreement states that P&Z would use the money it has from Sharpe’s letter of credit to complete final surface on the Hunt Farm roads. The estimated price for final surfacing — $19,600 — is much lower than the approximately $51,000 held by P&Z.

Then, according to the agreement, Sharpe will submit a plan for completing sidewalks to P&Z within 60 days of completion of the roads. If that second plan is approved by P&Z, the remainder of the funds held by P&Z will be used toward construction of the sidewalks, then Sharpe would pay for the rest of the construction.

Dexter said it’s possible some residents in Hunt Farm will sign waivers so that sidewalks won’t be added in front of their homes, which would lower the total amount of sidewalk length needed. Commissioner Vince DiMartino said he was uncomfortable with the idea of not completing the sidewalks as planned for in the subdivision construction plans. If an accident were to happen and someone blamed P&Z or Boyle County for there being no sidewalks, it could create a liability, he said.

Dexter responded that “there are risks in everything we do.”

“Our job is to find the most significant risks and plan around them for solutions,” he said. “… What this solution does is it allows you to take the biggest risk you have, which is the completion of a public roadway, (and resolve it).”

Voting on the issue

Ultimately, the P&Z Commission agreed to move forward with paving the roads and requiring Sharpe to submit a plan for the sidewalks. Commissioner Wendy Rochester made the motion to approve the agreement; Commissioner Mary Beth Touchstone seconded. Rochester, Touchstone, DiMartino, David Walden and Terry Manon voted in favor. Susie Kelly abstained due to a “personal interest” and Jim Boyd voted against the agreement.

Asked about his no vote after the commission meeting, Boyd said he believes Sharpe is still required to complete the work on the subdivision and P&Z should be holding the money it has from Sharpe until he finishes the work as originally planned.

“I pretty much don’t agree with negotiating away any of the original things he was obligated to do,” Boyd said.

Boyle County Magistrate Jack Hendricks, whose district includes Hunt Farm, attended Wednesday’s meeting and said he thinks the agreement will work to resolve the problem. The county’s main concern was that assurances be put in place no one would be coming back to P&Z or Boyle County Fiscal Court asking for money to complete sidewalks, Hendricks said.

“That to me is the developer’s responsibility, not the taxpayers of Boyle County,” he said. “… From what I’ve heard … I think this agreement will be fine.”

Students in the Danville and Boyle County school systems celebrated the 100th day of classes on Tuesday. At Toliver Elementary... read more