Junction not paid to participate in EDP 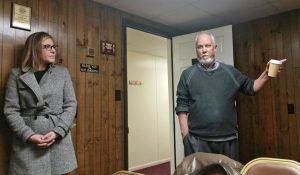 “I don’t have an agenda tonight,” Nelson said, addressing the council. “I’m here to try to create some conversation to say, ‘What are your questions, concerns and needs?’ Nine organizations trying to work together is a lot of fun. It can be messy and it can be hard. But we can do stuff together that we can’t do alone.”

After the meeting, Mayor Jim Douglas confirmed that Junction City has not paid to participate in the EDP. The cost is about 67 cents per resident, about $1,500, for Junction City to maintain a voting seat. No vote was taken on the subject during the meeting.

Council member Pete Kendrick said, “I just don’t see where Junction City is ever going to be a priority for anyone up town. If there’s two or three commercial properties and a possible suitor comes calling, I can’t imagine anyone would push one of the properties down here.”

Nelson said, “Your voice matters. Junction City is an important element. You are one of the nine organizations that have said, ‘Let’s work together.’” Nelson said their goal is to make sure businesses come to Boyle County, not just Danville.

“I think it’s important that you all be here and heard,” he said.

Nelson was asked by council member Kenny Baldwin what he saw in Junction, “as far as development.” 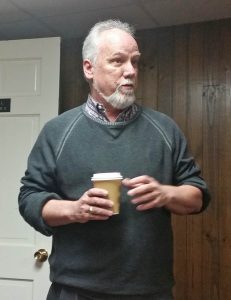 “The CVB is focused on bringing tourism to Boyle County, the cities in Boyle County, the chamber is focused on helping business grow. Hal and Jody’s job is to help recruit new businesses,” he said. “If a prospect ever was looking at ya’ll’s city as a potential site, we would come to the table and help you as much as we could. That’s what’s in it for all of us.”

He pointed to the airport as an underutilized asset.

“The answer is, we provide services through the different organizations, but the ultimate punchline is, by us working together, we do things we can’t do alone,” Nelson said.

Baldwin said, “My personal opinion was, we’ve never been looked at the same as the city of Danville, as far as development. That’s why I asked you, ‘What do you think? Do you see what we could do here?’ I took it as you didn’t understand what was here. That’s the problem. I think there’s been a block for many years. Junction’s here, it’s a spot on the map, but nobody has any plans or understands the potential of what we’ve got.”

Nelson assured him that it was a misconception that they are partial to Danville.

The Junction City Fire Department is planning to implement a fire explorers program for those 14-20, after getting approval from... read more