Question: Mr. Sampson, Have you ever discussed old mirrors and what makes them desirable or not? This one was given to my grandmother by a beau. Penciled on the back is “August 26, 1925.” They never married but the mirror always hung in her living room, which makes it special to me even if it isn’t valuable.

It is 33 inches tall by 13 inches wide. The oil lamp at the top is embossed on some sort of firm material, almost like linoleum. Except for a new wire, everything is original, including the etched glass.

I used to think it was too old fashioned to hang, but now I like it and it’s a handy size for narrow spaces. Can you tell me anything about it? 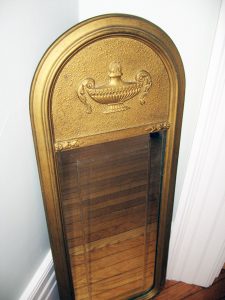 Answer: What a different time it was then. I can’t think of many guys that give a girlfriend, a gift of — a mirror? I think he might have hoped that the mirror would hang in his library. The mirror that he glanced in, while the kids played at his feet and his, now wife, brought him his slippers.

Hmmm, I guess the best laid plans sometimes don’t work out. It’s sweet that your grandmother kept it all these years.

By the way, you do know that the urn on your mirror is the eternal flame, don’t you? According to Merriam Webster: The eternal flame: A small fire that is kept burning as a symbol of something that will never end. That makes it even more bittersweet. I can see why she kept it.

People still like mirrors. Mirrors reflect light, are pretty on walls and let you see yourself. It’s one reason that mirrors were held sacred for so long. Plus they used to be frighteningly expensive.

I think that you kind of answered your own question. No doubt that this mirror was new in 1925, when it was given as a lover’s token. It’s in the federal style, which was popular at the time. You can always tell these federal styles by the use of urns, pillars, scrolls and the like.

America at the time was obsessed with all things federal, founding fathers and early American.

The urn and its background are made of a composition-type material. A mix of saw dust and glue forced into a mold under high heat and pressure and then glued or nailed onto a wooden frame. It was an inexpensive way to mimic hand carving.

I recommend that all old hanging wires be replaced with strong and modern materials. Old wires on mirrors and paintings are not the time to grow sentimental. Get rid of that stuff and keep it from crashing to the floor. You did well on that point.

It’s been repainted gold, as its faux gold leaf wore off decades ago. Dealers call this “radiator gold”, so many frames and radiators were painted this color in the 1960s and 70s. The design on the glass is a pretty touch and so expensive to reproduce today.

I like your little arched top mirror with its fake gold paint and its eternal flame. I expect that in a nice antiques shop it would be priced at about $50. Enjoy it and always keep that story with it. There’s a song or poem there just waiting to be written. Thanks for sharing it.

100 YEARS AGO — 1918 Jeannie Grubbs, Boyle County Demonstration Agent, will be at the Broadway City School at 2... read more