Strange sounds of footsteps or other non-animal like sounds have been reported by many who roam the woods at night. But what could be making these sounds? Is it an animal, or is someone following them? Could there be an unexplained explanation to these strange events? Maybe.

There has been a legend going around ever since early colonial loggers began disappearing, about a creature that stalks them as they roam the woods, especially during the night. They blamed this strange occurrence on a “creature” they called the “Hidebehind” due to its seeming ability to shift its body to hide behind most objects and sneak behind its prey, human beings.

According to legend, when the “Hidebehind” catches someone it takes them to its lair to be devoured. There are still claims that people hear someone or something following them even as they come to a stop they can hear steps behind them but as they turn to investigate they are shocked to find that nothing is there.

The Hidebehind has appeared in pop-culture such as in “Gravity Falls” and “Harry Potter.”

So does this explain the strange sounds people are hearing? Or is there something else out there? Something…unimaginable?

Blue moon over the Bluegrass

Jan. 31 brings spectacle to the sky with moon trifecta

On Jan. 31,  there was a spectacle in the night sky; a combination of three individual lunar events; a blue moon, a supermoon, and a lunar eclipse. These three lunar events have been deemed “Super-Blue-Blood Moon,” or as you may have heard from LEX 18’s own Bill Meck: “Super-Duper-True-Blue-Blood Lunar Eclipse.” Fitting for the Bluegrass state, isn’t it?

If you’re not familiar with the terminology of lunar events, the “Super-” prefix is a full or new moon that is at its closest point of orbit with the Earth. The “Blue-” prefix means that it is the second full moon in a calendar month, and the “Blood-” prefix means that the moon is in a total eclipse and appears as a reddish color due to the refraction of light over earth’s atmosphere and casting over the moon’s surface.

Visible by millions of people over all 50 states, Eastern Asia and Australia, the Eclipse started at 5:51 a.m. with the Earth’s shadow slowly beginning to sprawl over the surface, and by 7:51 a.m. the Moon’s total eclipse had begun, with the Earth’s refracted light causing the red sheen over the moon’s surface, creating a spectacle to behold for onlookers and skywatchers across the US.

With this 150-year-awaited event passed; the next rendition of supermoons in 2018 will be in the months of June, July and August; the only other lunar eclipse that will be this year, will be a total eclipse occurring on July 27. Although they will not be such a trifecta of oddity as the 31st’s Blue-Blood-Moon, the events will still be something to see.

Hats off to DHS Forensic champs

Many thanks to our Forensics winners! 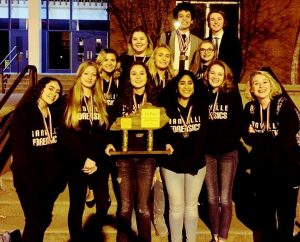 Throughout history, love has been a powerful force. Love influences everybody, and this can be especially important with people of influence, whether they are influential in politics, entertainment, etc. Recently, The Log Staff surveyed Danville High School students to find out who their favorite couples are — from ancient times to modern day.

Our famous entertainment couples range from Jay-Z and Beyonce, Spencer Tracy and Katharine Hepburn, Elizabeth Taylor and Richard Burton, Rose and Jack (Kate Winslet and Leonardo Dicaprio from “Titanic”), James Bond and his multiple mistresses, Tom Hanks and Meg Ryan (from “Sleepless in Seattle”), Julia Roberts and Richard Gere (from “Pretty Woman”), and Lucille Ball and Desi Arnaz (from “I Love Lucy” and married in real life).

Even notorious duos made the list of bandits: Bonnie and Clyde, Butch Cassidy and the Sundance Kid, as well as the evil criminal Adolph Hitler and his wife Ava Braun.

Happy Valentine’s Day to all!

Salute to our DHS Academic Team:

From our schools: Rebel Pride, Feb. 5