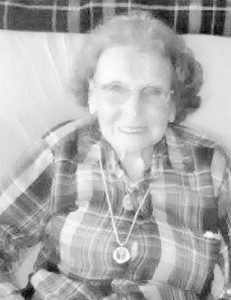 She was born on September 5, 1927, the only child of Rev. Aubrey Hardin Reeves and Amanda Frances Hill Reeves, of Hustonville, Kentucky. She was born in Moreland, Kentucky. She resided in Wilmore and Nicholasville, Kentucky, but was a long time resident of Danville, Kentucky. She was the widow of Roy Ansel Norvell, of Perryville and Danville, who passed away in 1974. She left home at 15 years old, took off to California to pursue a career in film, but was homesick and came back and worked as a waitress and cook at the Cincinnati Bus Station. She then went on to work at The Kentucky State Hospital, as a Switchboard Operator, where she met her husband, Roy Ansel Norvell, who also worked there. They married, moved to Danville, and had three daughters, Deborah Frances, Brenda Mae, and Betty Lou. She wrote a script for the Bonanza TV show back in the 1960’s, called “Hoss’ Revenge”, and she also wrote a song, that was sent to Nashville but never published, “Take Me Into Your Heart”. She and Roy opened the Norvell’s Grocery on Fifth Street, in Danville, which they owned and operated for many years. It was a delivery grocery. Upon Roy’s death, Leetha took on three jobs, waitressing at the H & L Restaurant, cashier at the PDQ Market, and at a local laundromat, all in Danville, to support her family. She remained in Danville until 1986, when she moved to Nicholasville, to be near her daughters. Due to health issues from many, many years of very hard work, she moved to Nicholasville, then Wilmore, where she resided with one of her daughters, Betty. As her health declined further, she passed away while a resident at the Homestead Nursing Home, in Lexington.

A private memorial service will be at W.L. Pruitt Funeral Home, Moreland on Monday, February 19, 2018 with burial in Hustonville Cemetery.

In lieu of flowers, memorial contributions are suggested to Hustonville Cemetery.

There is a Guestbook available at www.wlpruitt.com.