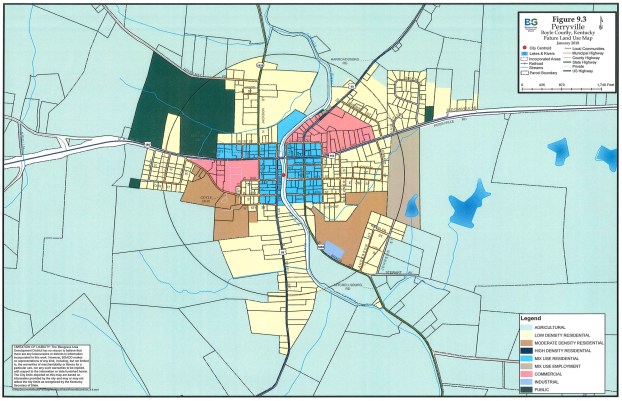 A new future land use map has been drafted by a committee in Perryville. P&Z Director Steve Hunter says the proposed map offers a lot of advantages over the current future land use map, which doesn't include property lines or special "mix use" categories that allow for flexibility. (Image courtesy Danville-Boyle County Planning and Zoning)

What does the future look like for Perryville? No one knows for sure, but a proposed planning map update could lend a lot more clarity to what officials hope will happen.

The current future land use map (FLUM) for Perryville doesn’t really offer much help in guiding future development, said Steve Hunter, director of Danville-Boyle County Planning and Zoning. That’s why Hunter got together with Perryville officials to draft a new FLUM that he said could help with economic development and play to Perryville’s strengths.

“When I went down there and saw their future land use map, I said, ‘guys, this confuses me, because when I look at your town, surely this isn’t the game plan,’” Hunter said.

The current FLUM for Perryville is part of P&Z’s comprehensive plan, which was adopted in early 2017, and lays out where the city expects to see residential, commercial, industrial, multi-family and other development. But it doesn’t map those categories to actual land parcels and the locations of some categories don’t really make a lot of sense, Hunter said.

Perryville’s 2017 FLUM actually looks a lot like the one from the county’s 2007 comprehensive plan and may have been largely just re-adopted from that earlier plan, Hunter said.

Hunter said the focus of the committee was on what Perryville wants “from a  community perspective.”

“We’re not saying the town’s going to grow, we’re not saying we want it to grow, but if it was to grow, where do you all want to see it go?” Hunter said was the question the committee was asked to tackle. “… We came up with a master plan that we now want to take to the public and have an open house.”

That open house is scheduled for 4-6 p.m. Thursday, Feb. 22, at the Perryville Community Center on Buell Street.

The proposed FLUM would assign categories by parcels, rather than the current map that uses a radius from the town center to classify a residential zone. That method led to some pieces of property being split by categories, which is confusing, Hunter said.

The core of the city would largely be categorized for “mix-use residential” purposes. Hunter said that category would play well into Perryville’s atmosphere and history, encouraging things like businesses that are run out of homes, or first-floor businesses with apartments on the second floor.

“In a historic town like Perryville, what it hopes to do is keep the established core of the city and allow adaptive reuse,” he said. “Where the old map pretty much just labeled everything hit-or-miss, ‘this is residential, this is commercial,’ this now shows a desire that we want this whole part of downtown, on both sides of the river, to stay mixed-use residential, which (encourages) flexible uses, which hopefully puts reinvestment in the existing building stock, especially in a historic town like Perryville.”

Another new feature on the proposed FLUM: a “mix-use employment” category applied specifically to a large tract of land on the eastern edge of town. Hunter said the category is used as a “targeted job-creator.”

“Mixed-use employment is what we’ll call a pick-and-choose category,” Hunter said. “You could do retail; you could do some manufacturing; you could do apartments; or you could do a combination. … The reason it’s called mixed-use employment is it’s meant to be a job-creator. And they targeted that parcel specifically because it’s fairly big. They talked to that property owner — the committee did — independently to see if  this is something he’d be OK with … and then they’ve already kind of talked to (the Danville-Boyle County Economic Development Partnership).”

The FLUM would be made available online if adopted as part of the comprehensive plan, meaning developers would have easy access to see where good spots for development might be in Perryville, Hunter said.

The proposed FLUM designates a pair of commercial areas, one on the north side of U.S. 150 on the east side of the river; and one west of Jackson Street and south of U.S. 150 toward the west end of town.

Hunter said it’s important to note the FLUM is completely different from zoning on individual tracts of land. The FLUM will have no impact on existing zoning and won’t stop anyone from continuing to use their property as they do now.

In the future, if someone wanted to change the zoning on a piece of property, the FLUM would be consulted as evidence of whether the zone change would be appropriate, Hunter said.

The process Perryville went through to develop the proposed FLUM is one that could be replicated elsewhere in Boyle County, Hunter said. Junction City hasn’t participated in P&Z for a while, but has continued to handle planning issues on its own; it’s likely Junction’s FLUM is based on 2007 maps like Perryville’s, he said.

“Junction is a prime candidate for this because, like Perryville, it’s a gateway into our county on a high-traffic … road,” Hunter said. “There’s clearly vacant parcels all over the community. There’s parts that the local officials may desire to see redeveloped someday.”

At Thursday’s open house, Hunter said there will be large printed versions of the current and proposed FLUMs for the city, as well as handheld copies people can take home with them. The committee members will be in attendance to answer questions and explain the map. If anyone has an issue with how their property is categorized, they can let the committee know.

“If the open house is successful, then we would set up an amendment to the comprehensive plan,” Hunter said. “… If there’s problems, we’re going back to the committee. We’ll just punt it and fix the things we’ve heard. No one’s trying to create waves here. We just want to get a good game plan for the future and have a map that’s kind of a living, breathing, real future development map.”

The City of Perryville will host a community open house to review a proposed future land use map for the city from 4 to 6 p.m. on Thursday, Feb. 22, at the Perryville Community Center, 216 Buell St. For additional information, contact the Danville-Boyle County Planning and Zoning Commission at (859) 238-1235 or by emailing zoning@danvilleky.org. The current future land use map for Perryville does not include property lines, places some properties in more than one category at the same time and doesn’t include flexible “mix use” categories or targeted economic development strategies, according to P&Z Director Steve Hunter. (image courtesy Danville-Boyle County Planning and Zoning)

Children in Kentucky struggling with challenges and obstacles have a hero that works to develop policies in Frankfort in attempts... read more