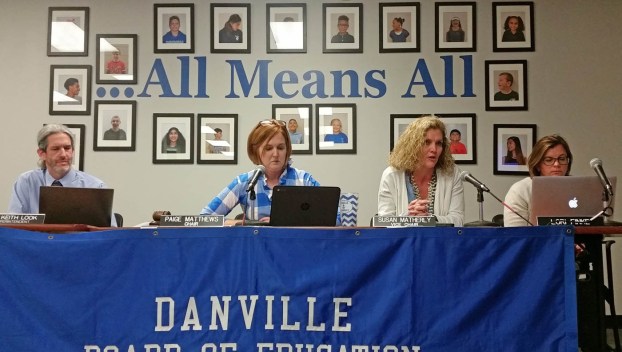 Kendra Peek/kendra.peek@amnews.com Board member Susan Matherly expresses her thoughts on voting to not renew the contract of Superintendent Keith Look on Monday night. Matherly, along with Chair Paige Matthews and Member Lori Finke voted to not renew his contract on Monday, instead listing a vacancy in the district. Board members Steve Becker and Trow McCowan voted against the vacancy, casting support for Look remaining.

By KENDRA PEEK and BOBBIE CURD

Does anyone know why Superintendent Dr. Keith Look won’t be returning next year?

That’s the question posed throughout the community since Monday night’s 3-2 vote against renewing his contract.

With a standing-room-only crowd, several spoke on Look’s behalf. The last agenda item was “discussion of superintendent’s contract.”

Chairperson Paige Matthews made a motion to “declare a vacancy” in the role of superintendent. Susan Matherly and Lori Finke voted in favor of not renewing Look’s contract, while Steve Becker and Troy McCowan voted against the move.

However, no specific information was given as to why Look won’t be coming back. Many in the community have taken to social media since Monday’s vote, blasting the board for not giving the community any indication as to why the action was taken, and questioning how it happened.

The three in favor of Look moving on all had prepared statements, while the two against the move did not. Statements in favor of not renewing his contract consisted of professional appreciation for Look and for what he’s done for the district, and only included explanations that “there have been concerns” about Look.

The January meeting was when parents and staff began showing up to speak on Look’s behalf. Some told the board they were aware of his contract being in jeopardy due to talk on the street and various comments on social media.

The board did not address those concerns during the meeting, and afterwards Matthews said she believed “it was a misunderstanding” because the agenda included an executive session discussion about Look’s upcoming evaluation, which is a yearly requirement of the Kentucky Department of Education.

“There hasn’t been, as of yet, but I feel like there will be discussions (about Look’s contract),” Matthews said after the January meeting.

Only a working session, where neither Look or his contract were discussed, was held before Monday’s meeting, where the contract discussion item was included.

On Tuesday, board member Becker, who voiced his dislike of the action being made during the meeting, said since the agenda item was included, he knew there would likely be a vote. It was his gut feeling, even though it wasn’t specifically listed, but said there was no conversation about putting the item on the agenda for a vote.

“The intention always was that there would be a discussion with the possibility of a vote. It wasn’t like there was a phone call that said, ‘I’m going to put this on the agenda and we’re going to vote,’” Becker said.

McCowan agreed with that sentiment.

Tuesday, Finke explained she prepared her statement the night before, but used it to compose her thoughts that “had been whirling” around for weeks. She declined to say anything further.

“We knew from the agenda … and then Paige had let us know that it would most likely come to a vote, that we were going to be doing a roll-call vote,” board member Matherly said. She said she felt like the board attempted to make an informed decision based on the feedback it received “over the last several weeks, and even longer.”

Again, Matherly would only say Look has strengths, but also some areas of concern.

“There were areas identified in his evaluation — we did an evaluation — that there were room for improvement in some of those areas,” Matherly said.

Becker said he had been fielding phone calls regarding the decision throughout the day Tuesday.

“I do know that there are people in the community that are wondering how it’s possible that three people would have prepared statements and walk in with them before the meeting even took place,” he said.

However, all five board members said no conversations regarding Look’s contract took place prior to Monday’s meeting.

Becker said it was delicate because contract extension conversations must be done in open session, unlike hiring contracts and superintendent evaluations, which can be discussed in executive session.

“We were all aware of what the rules and regulations are,” Becker said. “You don’t want to get yourself into a situation where you’re having illegal discussions.”

Becker said the board will now have to start the process of finding a new superintendent, which can sometimes be lengthy.

“It’s not uncommon for the turnaround time to be six to eight months,” he said. “I’m hoping we’re going to have a discussion soon about the possibility of an interim.”

The vacancy will be effective July 1, after Look’s current contract ends.

“It’s an interesting year … Three board members are up for re-election in November,” Becker said, speaking of himself, Matthews and Matherly. “I hope we, as a board, can get through this and help heal the district. There are a lot of unhappy folks. Dr. Look is leaving and they wanted him there. I had one teacher tell me, ‘We have no confidence in the school board.’”

Communication with the community