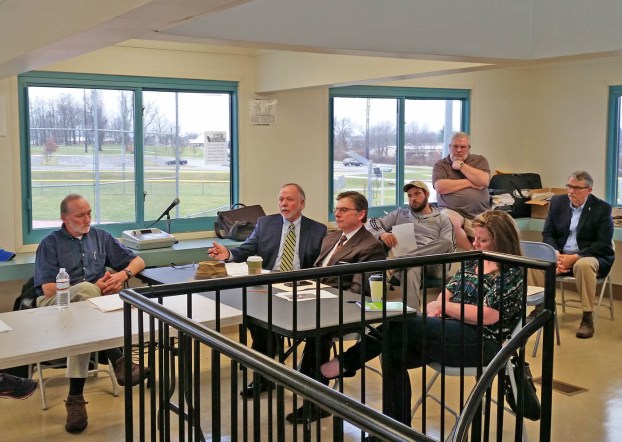 Parks and Rec board receives check to reimburse for camera work

In an effort to rectify the ongoing conversation involving camera upgrades being completed at Millennium Park, Rick Serres turned over a check of $2,298.31 and a donation of labor to the Danville-Boyle County Parks and Rec Department during Wednesday’s meeting.

Serres, a city commissioner and owner of Bluegrass I.T. — the company that completed camera work for the park— handed the check and the vouchers for free labor, all totaling $3,600, to the board.

“The best thing for me to do is to refund your money. I brought that check and I’m giving that to you all,” he said.

“I want to make sure everything attached to this project is complete before you move on to a new vendor,” Serres said. “That was a big concern of this board, to change vendors mid-stream, it was going to cost more money. I apologize to you all that you had this hiccup. I certainly didn’t know you were going to have this hiccup.”

The Boyle County Fiscal Court and the Danville-Boyle County Parks and Rec Department jointly paid for the cameras and installation, costing a total of $7,600.

Explaining the project to the board, parks department employees and other city and county officials present, Serres said he took on the job as part of what he and the board believed to be an ongoing project.

“This board wanted to proceed with a contract, which was really just an agreement, that started prior to me being a city commissioner, for the security cameras throughout this park,” Serres said.

The Danville-Boyle County Parks and Rec Ad Hoc Committee was to fund the final camera upgrades and requested a quote for the work from the parks and rec department, he said. According to an article in The Advocate-Messenger, the work began in September, after a series of emails from county treasurer and Ad Hoc clerk Mary Conley to other members of the committee in August. No one vocalized concerns with the project, she said.

“He said, ‘Rick, I think you’re right, this is a continuation of that agreement that’s ongoing. (It’s) probably not a worry, but I’ll get back to you,’” Serres said on Wednesday.

The work continued and until Dexter got back to him, telling Serres his company needed to stop work, since the work was now being done for the Ad Hoc Committee instead of the Parks and Rec Board. By that time, only one camera needed to be connected to the system in the park; it had already been mounted in place but was not turned on.

During the Feb. 12 Ad Hoc Committee meeting, the situation was discussed in detail, with Scott explaining that the city would not pay its portion of the bill because he felt it was questionable to have Serres’s business do the work, considering his involvement with the city. By this time, the parks department had paid the remaining portion of the bill, but Parks & Rec Board Chair Roger Ross said they did not have it in their budget to cover $3,800 on security cameras. The work had been stopped on the cameras, despite being fully paid for, but Serres said they will complete that at no cost.

Conley, who was present at the board meeting along with Judge-Executive Harold McKinney, asked for an itemized bill to explain the cost differences.

“My bill has gotten muddy. Really muddy,” she said. “If something was donated, my bill needs to fairly represent what was donated.”

Serres said, “I can ask the IT Manager to give a report on what was finished — it will be a finished product. That’s an obligation as a company we have to do it. I’m giving labor in kind … No loose ends. I feel that’s an obligation I have as a city commissioner, as a business owner and a former board member.”

The board never formally accepted the check. Parks and Rec Director John Drake said they would have to figure out the best way to handle the check, before they could cash anything.

Scott, who was there with Mayor Mike Perros and City Commissioner Denise Terry, also addressed the board requesting clarification as to why his request for an executive session was not on the agenda.

“The city did request for you to go into executive session, as authorized under open meetings law,” he said.

Scott cited KRS 61.810, specifically referring to “discussions or hearings which might lead to the appointment, discipline, or dismissal of an individual employee, member,” per the statute.

“The answer that we received from you is that you were unable to accommodate that request in the present because you do not have an attorney,” Scott said.

Ross said that was “part of the reason.”

He explained to Scott that he felt it not correct to enter into executive session without first ensuring his board had been given adequate time to educate themselves on executive sessions. The members were given packets regarding executive sessions, which they have been asked to read and sign saying they had done so; at the time of the meeting, only two of the six members had signed.

The board is also waiting on the city’s appointee to the committee, following the departure of Alex McCrosky in December.

“If we go forward at this time, we won’t have a quorum,” Ross said. “At the first available meeting that that is a concern, we will put on the agenda for that time.

“I did not decline this because of the fact I did not want to go into executive session, I was advised that I needed to fulfill all the obligations as the chair in order to proceed to that, so there was no question later on whether it was legal or whether I had done my due diligence to proceed.”

By KENDRA PEEK and BOBBIE CURD kendra.peek@amnews.com bcurd@amnews.com  Does anyone know why Superintendent Dr. Keith Look won’t be returning next... read more