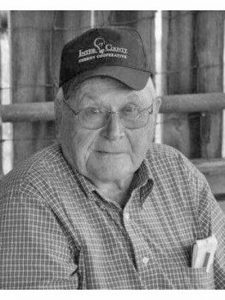 Paul Gellette Ballard, 91, of Bryantsville, passed away Monday, February 26, 2018 surrounded by his family at the Hospice of the Bluegrass at Baptist Health.

Born on August 27, 1926, in Bryantsville, Kentucky, he was the son of the late William Goebel and Helen Ray Ballard. Paul is preceded in death by his loving wife of 69 years, Blanche Loraine Ballard. Paul was a World War II veteran who served in the Philippines and Japan in the 11th Air Bourne Division as a paratrooper. He served several terms on the local Southern States Board, Inter County Board for 46 years, the KAEC Board, and the Garrard County Fair Board for 21 years. He started the Camp Dick Fire Department and served as the Chief for 41 years. He was a Kentucky Colonel, Mason, EMT, and the chairman and director of Farm Bureau.

In addition to his parents and wife, Paul was preceded in death by two daughters, Ann Gellette Ballard Ferry and Penney Lee Ballard and a brother, Hubert Lee Ballard.

Funeral services will be 11:00 a.m. Friday, March 2, 2018 at Spurlin Funeral Home Chapel with Bro. Keith Weldon officiating. Visitation will be Thursday from 4-9 p.m. Burial will be in the Ballard Family Cemetery in Bryantsville, Kentucky.