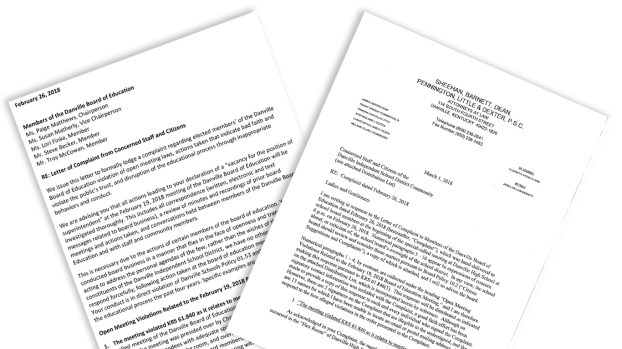 Full texts of complaint against Danville school board, attorney’s response

On Feb. 26, a group of 108 “concerned staff and citizens” delivered a seven-page letter of complaints to the Danville Board of Education, alleging open meetings violations and a violation of “public trust.”

On March 1, school board attorney Vince Pennington delivered a response to the letter, issued under the authority of board Chair Paige Matthews, treating the group’s letter as a filing of formal open meetings complaint. Pennington denied the board had violated the Open Meetings Act.

The two documents are made available here in their entirety.

Complaint from ‘concerned staff and citizens’

Response to complaints from school board attorney

Editor’s note: At the request of both a signatory to the original complaint letter and school board attorney Pennington, four pages of Pennington’s response have been omitted listing the names of those who signed the complaint along with their addresses and email addresses.

Danville Board of Education Attorney Vince Pennington has responded to a complaint letter signed by more than 100 community members... read more