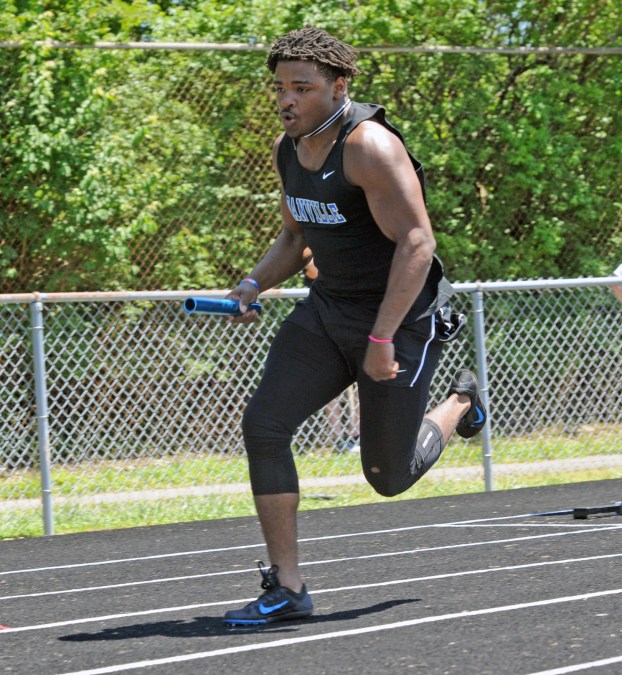 Danville’s track team has had a successful start to the season.

The outdoor season hasn’t started yet, but the Admirals won four Class A state indoor titles over the weekend at Mason County, had another runner-up and placed third-overall as a team with only a select few athletes in attendance.

“Indoor season in Kentucky, it is what it is. There’s more meets than there ever used to be, and I’ve taken a few here to the UK meet and we took a few to the Mason County meet earlier in the season,” Danville head coach Chris Verhoven said. “(Saturday) sure wasn’t representative of a full team, it was more selective on my part. These guys just finished up basketball, wrestling, diving. D’Mauriae has been out to practice for a week. Don threw once, Jaleel didn’t throw at all. Jaxxyn has been doing some indoor training, which has helped, but for the last couple weeks, he’s been all about diving.”

It was an interesting mix of athletes — VanCleave, Mr. Football, is back running track and was randomly placed in a group because he didn’t have a seed time — and smoked everyone in his heat, Verhoven said.

“The worst part about all that, normally at a track meet, you run on seed time. But they only accepted this year’s indoor times as seed times,” he said. “So (VanCleave) went down as a no time and he went randomly in a heat. And he literally ran by himself. He blasted his group. They always run on times, you always run better with competition but he had none.”

VanCleave didn’t just smoke his own heat — he smoked the rest of the field. Second place ran a 6.81.

Harris placed second in the shot put after throwing 44 feet, 5 inches. But Warren was on fire, Verhoven said, finishing with a 44-foot, 11-inch mark. Warren didn’t practice after the Admirals lost on the basketball court last Thursday.

“The best thing is that Jaleel, they played (basketball) on Thursday, he had Friday off and he showed up Saturday morning at 6:30 to get on the bus and he said, ‘coach, I haven’t thrown a shot since spring,’” Verhoven said. “And he goes out and PR’s by two feet, indoors. This is really promising for outdoor, because Don’s not going to let that happen. He’s not going to be No. 2 on the team. Don threw well, but Jaleel threw out of his mind today.”

McKnight and Wood, both sophomores, won events laden with upperclassmen. McKnight ran the 55-meter hurdles in 8.23 seconds and was the only sophomore finisher in the top eight.

“Finally, Gabe caught a break,” Verhoven said. “That’s crazy considering he’s such a good kid and hurdler. But outdoor season, for two years, region at LCA, he fell and hit his head in the 300 hurdles. He was six-hurdles in at state last year and he hit a hurdle and goes down. We all know he’s great, he broke middle school records and his time is coming. It’s nice to see finally that the break went the other way, he ran a decent race and he won.

“I don’t think it was luck today, but it was nice to see Gabe win something. Now his confidence is high, this is one of many, hopefully. Now he can take this confidence and win more in outdoor season.”

Wood, fresh off of an 11th-place finish at the state dive championships, vaulted 11-feet to place first.

“As a coach, it’s incredible to think that we have these guys who haven’t committed to the sport yet, it’s early in the season — you treat indoor like the starting point of the outdoor season,” Verhoven said. “When you look at it that way, you’ve got four guys that won state championships, we got a runner up, we finished third in a meet that, quite frankly, I’m sure somebody would argue with me, is totally geared toward distance schools.

“It’s so encouraging because we’ve got so many guys that say they want to come out this year. Winning state at football sure helps a whole lot, this is their last chance to win another ring, not just ‘a’ ring. They’re all excited and feeding off of one another. They know now that they can win something, and I truly believe that if everybody continues what happened today and the pieces we’re going to add to this puzzle, we should win state. But a lot of things have to happen, you have to have luck, you have to show up and work hard. It’s always the goal, but it’s more reasonable this year with the talent that we have.”

It’s figuring out how this talent fits in together that will be the challenge, Verhoven said.

“March 20, our first outdoor meet is at Boyle. We’re like everyone, we’re still figuring out the pieces. Who’s going to do what? That’s like any sports team, you know at the end what it will look like but right now, we’re all kind of figuring things out. We’re not sure how all the parts fit.”

Danville hasn’t had many girls qualify individually for the state meet. Two qualified this year. The Admirals sent eight to... read more