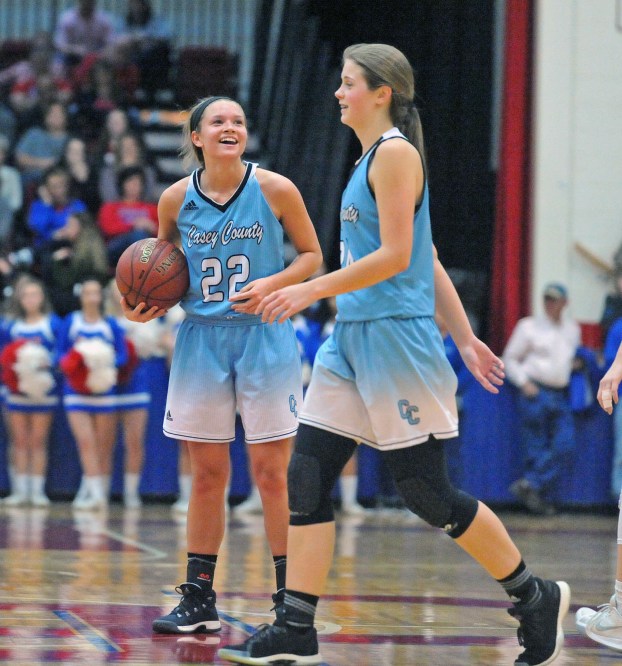 Weddle’s Rebels took down Southwestern 65-49 to advance to their first 12th Region title game since 2013.

“Every day at school before a game, I have to go get a marker,” Weddle said. “Because I always lose one, two or three in a game. Tonight, they played well. There were things we did that were dumb at times but they never gave up playing defense in the half and full court. That’s the most important thing to me, they were guarding, talking and doing the little things. Rebounding, we were better in the second half. When they’re doing those things, I don’t get mad as easy.”

Casey led 27-23 after halftime thanks to a closing-seconds shot from Lauren Lee, and in the second half, pushed their advantage further.

“We talked at halftime about the four-point lead and we don’t want to come out here and lose this game because of a lack of heart and effort, like not rebounding,” Weddle said. “We made a little adjustment on the press, they were trying to throw long and opposite. We tried to cut that out and I think that slowed them down and eliminated a lot of those transition shots.

“The girls just played focused the whole game. They never let up. Every timeout, they were saying, ‘gas pedal down.’ They wanted to win, bad. And they showed it.”

Gena Cravens led the way for the Rebels with 23 points, but it was the supporting cast that stood out after the game: Natalie Duggins and Lee each scored 14 points, Jordy Stephens had nine and Shaylah Wilkey scored five for Casey.

“The beauty about our team, we have eight people who can flat-out play,” Weddle said. “If you want to pinpoint one or two, we’ve got somebody else who can step up and take control of the game and do what we need to do.”

Weddle was pleased with her team’s effort on the glass as well.

“Natalie had two, maybe more, offensive rebounds from the free throw line,” she said. “Those were big because the other team had position. She stepped up last game in the second half. She’s a sneaky scorer and people don’t realize how good she is and they kind of take her for granted, sag off of her, and she’s started to take advantage of that.”

Defensively, Casey was solid on Southwestern’s star, Regi Cundiff. Cundiff fouled out in the fourth quarter with 10 points.

Southwestern beat Casey 53-47 on Jan. 25 in the regular season. That’s motivation for the Rebels in the title game, where they’ll face Mercer County.