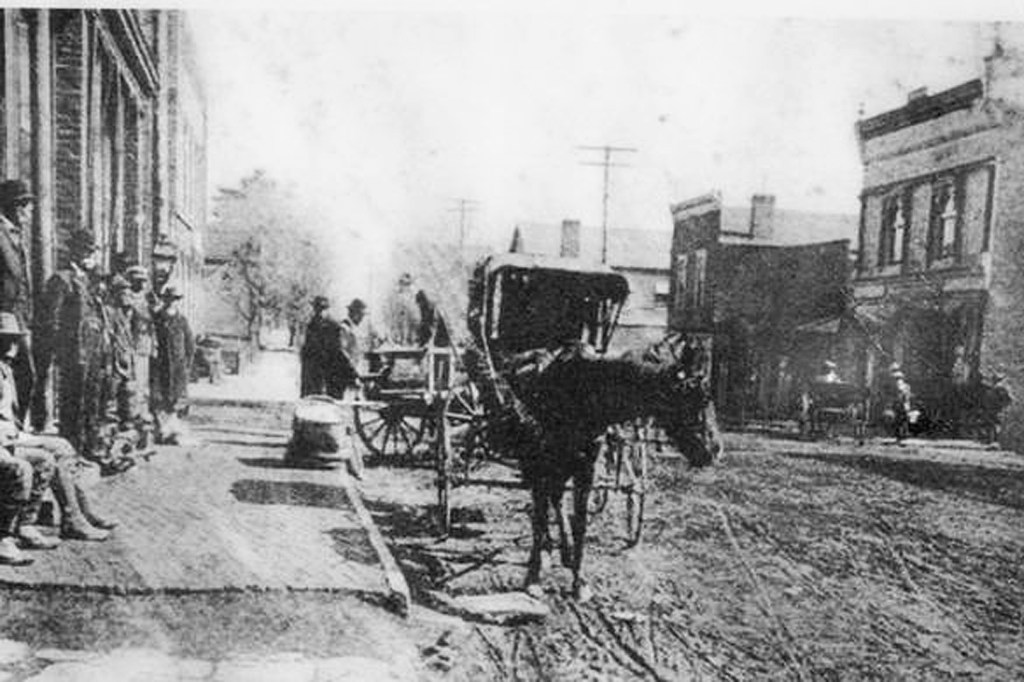 Hustonville as it looked in the horse and buggy days in about the mid to late 1800s.

Hustonville was known at the “Capital City of West Lincoln” more than 100 years ago, according to a news article published in 1901 in the Kentucky Advocate.

The town was founded by a party of pioneers from Virginia and began as New Store and later Cross Roads and was incorporated under the name of Hustonville in 1835. The population was about 500 in 1901.

The old stone house near the intersection of Ky. 70 and U.S. 127 was built in about 1806 by Stephen Huston, whom the town of Hustonville took its name.

During its early years, the town had numerous stores, a druggist, livery stable, hotels, barber, bank and post office.

An opera house, two lodges, a college, three churches and a town government also was in town.

Dr. Alberta Carpenter may have been the only regularly practicing woman physician in the Blue Grass when she operated an office in Hustonville about 1885.

She had been in town for six years and was exceptionally successful during that time, and had charge of a very large practice.

She was a graduate of Cincinnati Medical College and was president of the Lincoln County Medical Society in 1921.

C.W. Adams was the only druggist in town. He and his brother A.J. Adams also ran a dental practice and other business.

The city government was in charge of the Board of Trustees: J.P. Goode, head trustee; and W.P. Williams, A.M. Frye and I.F. Steele.

The National Bank of Hustonville was organized in 1883 by J.

Abe Newton ran the Newton Hotel. Another hotel was operated by George E. Weatherford in the early 1800s. Julius Caesar Minor was the only barber.

Splendid turnpikes lead into Hustonville from five directions and were toll free. Although the town did not have a railroad, Moreland was three miles north and passengers had the benefit of an excellent bus line to the city.

Green River Valley was the only telephone system connected with Hustonville, but East Tennessee Co. had a line under construction.

The most handsome building was Central Christian College on Danville Avenue. The brick structure contained 30 or 40 rooms and was erected by the Christian denomination. The Rev. B. J. Pinkerton was principal, and assisted by Julia Carpenter and Mary C. Carpenter was in charge of music.

were located in town.

Hustonville had two incidents that caused an uproar — William Quantrill and his Raiders rode into town and Kansas grasshoppers tried to munch on everything that was edible.

Quantrill was big news when the famous guerrilla at the end of the Civil War met up with Lt. Cunningham, cousin of

Cunningham was posted with a small force when Quantrill swooped down on the town.

Jesse James and his brother-in-law Allen Palmer were Quantrill’s command and took possession of Cunningham’s horse.

James attempted to transfer his saddle and baggage from his own jaded animal to Cunningham’s horse, but the young lieutenant slashed the saddle girths in pieces each time they met.

The second time James warned him to resist. Cunningham refused to obey and James shot and instantly killed Cunningham.

Captain Bridgewater of Stanford started in pursuit of Quantrill’s band which headed west. It was a few days later when Quantrill was killed near Bloomfield by Ed. Terrell, a federal guerrilla.

An army of Kansas grasshoppers had been camping in the neighborhood for three weeks and devoured everything in their way.

Dr. Wyatt Letcher of Danville said 60 acres of hemp was almost destroyed and other farmers were wiped out of crops by the hungry hoppers.