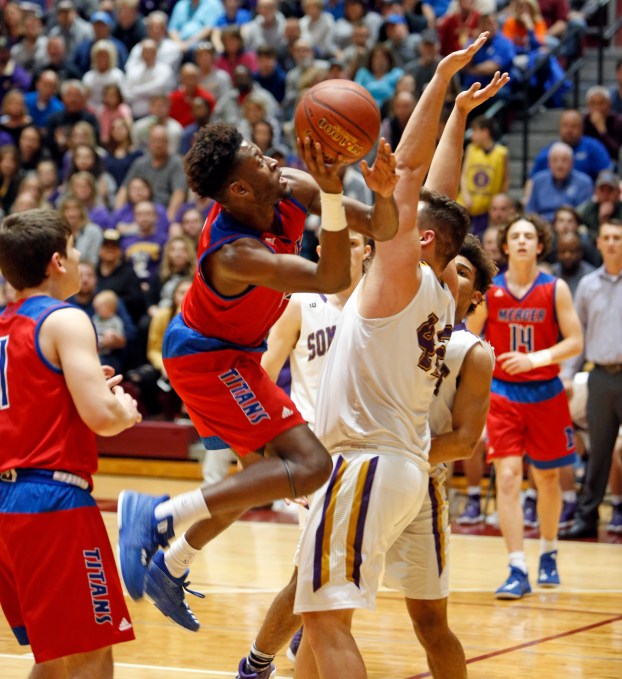 Photo by Mike Marsee/ Trevon Faulkner of Mercer County goes up for a shot that would result in his 3,000th career point against Somerset defender Trae Harmon during the first quarter Monday. Faulkner became the 35th Kentucky boys player to reach 3,000 points and the fifth to reach both 3,000 points and 1,100 rebounds.

SOMERSET – Trevon Faulkner got his, his Mercer County teammates got theirs and the Titans got to the day they have been waiting for.

March 6 has been circled on the Titans’ calendar since before they even had a 2018 calendar. It’s the day of the regional championship game, and it’s the day they have been looking forward to since they lost in last season’s regional final.

Mercer rolled into the title game of the boys 12th Region Tournament with an 80-61 victory over Somerset at Pulaski County on a night when Faulkner scored his 3,000th career point and the rest of the Titans took advantage of their opportunities as well.

The Titans will face Southwestern for the championship and a berth in the Boys Sweet 16 at 7 p.m. today. They will be playing to win their second titlein three years and to avenge a loss to Pulaski a year ago.

“We’ve had March the 6th circled since we started back in May,” Mercer coach Josh Hamlin said. “We wanted to get here, we wanted to give ourselves an opportunity, and (make sure that) whoever we met here we’d be ready to go, and when the ball tips at 7 o’clock we’ll be ready to go.”

“Our guys on the bus on the way here were mentally prepared,” Faulkner said. “Before the game, everybody was ready, pumped up, and we really didn’t care who we played. We just were focused, and when we’ve got that focus, that’s when we come out and play. We knew Somerset hadn’t been in our shoes. We’d been here three years in a row.”

Faulkner sank 3-point shots on three consecutive trips during the opening salvo, and he had nine points from behind the line and eight points in the paint during a first quarter in which he went 7 for 11 from the field.

He became the 35th Kentucky schoolboy to reach 3,000 career points when he muscled up a shot in the lane in the final minute of the first quarter that gave him 17 points in the period and gave Mercer a 25-7 lead.

“It’s a blessing,” Faulkner said of his milestone. “I thank God every day for blessing me with the talent he gave me.”

Faulkner finished with 30 points and 11 rebounds, not that he was counting.

“I was just focused, and I just wanted to win,” he said. “I want to get back to Rupp, that’s my goal. I really don’t worry about the individual goals. I just want to win, and I want to go to state.”

So do his teammates. And when Somerset doubled down on its effort to contain Faulkner in the second quarter and beyond, other Titans stepped up.

Gunnar Gillis had eight points and five rebounds in the second quarter, and he finished with 10 points and 11 rebounds. Carter Baughman went 4 for 4 from 3-point range and scored 20 points, and Ty Divine and Kaelin Drakeford had nine points each.

“We’ve got a superstar, we’ve got a stud, but we’ve got other guys that are really capable. When they help off of Trevon, they make them pay most nights,” Hamlin said. “Tonight Trevon was hot early, he was in that zone and their guys knew it, they started running some junk defenses at us and that got our other guys some looks. We told them, we said, ‘Be ready for it, because you guys are going to be the ones that are going to feast.’”

Gillis and Baughman combined to score the last six points of the first half to give Mercer a 37-21 lead, and Somerset never got closer than 13 points in the second half.

A 10-3 run at the end of the third quarter gave the Titans their largest lead at 63-39, and they scored 12 of their 17 points in the fourth quarter at the free-throw line.

“If this kid’s not Mr.  Basketball, they should do away with the award,” Hamlin said.

Now the Titans turn their attention to Southwestern (17-14), which defeated Pulaski 53-44 in Monday’s first semifinal after losing all three regular-season games between the teams.

It will be the third regional tournament meeting in four years between the Titans and Warriors. Mercer won a first-round game in 2015 and a semifinal in 2016.

“You can’t get through a postseason without Mercer and Southwestern meeting some time,” Hamlin said.

“When we played them at the end of the season, we said, ‘Man, this is a really good ballclub,” Hamlin said. “(Leading scorer) Hunter Stephens is really really good, they’ve got a couple of good bigs. It’s going to be a battle for us, but we wouldn’t have it any other way.”

A year ago, Toni McCombs was watching Mercer County win the state championship and wondering how she could fit in... read more