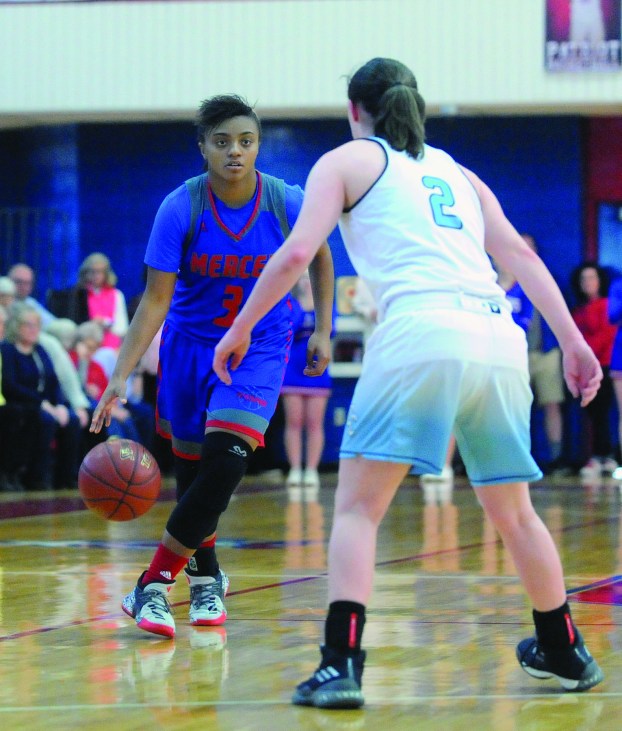 A year ago, Toni McCombs was watching Mercer County win the state championship and wondering how she could fit in with a group that had played so well together for so long.

A year later, she has her answer.

It took some time, but McCombs has found her place with the Titans. That became perfectly clear in the 12th Region Tournament, when she had 39 points and 11 rebounds in Mercer’s three games – and had her biggest game of the year exactly when the Titans needed it most.

“I didn’t think I’d play that big a part, but I knew I had some business to do to help our team win,” McCombs said.

McCombs, a junior who transferred to Mercer from Knox Central last summer, was on the floor for well over half of Mercer’s semifinal win over Lincoln County and its championship game victory over Casey County.

“She was a difference-maker in this tournament,” Mercer coach Chris Souder said.

She figures to get plenty of playing time again this week when the Titans return to Northern Kentucky University for the Girls Sweet 16, as she has become something of a sixth starter for the Titans.

No matter what McCombs does at the state tournament, she will be much closer to the action than she was a year ago, when she watched the Titans win it all from the stands at BB&T Arena, knowing she was moving to Mercer when the school year ended.

“I knew what I was coming into. It just gave me a better look at it,” she said.

McCombs said even as she watched the Sweet 16, it wasn’t easy to imagine herself playing alongside the other Mercer girls.

“It was kind of hard for me to visualize it then, because at first I was a little iffy about moving, leaving my friends. But it was probably one of the best decisions I’ve made,” she said.

There was no doubt that McCombs had game. She was named to the 13th Region Girls Coaches Association’s all-region second team after her freshman and sophomore seasons, and she led Knox Central last season in scoring (10.1 points per game) and field-goal percentage (.442).

Souder said it couldn’t have been easy for her to move to an unfamiliar place and to join such as established team.

“It’s impressive on her part, because when (her family) said they’re coming, I said, ‘I can’t promise you anything.’ We’re the defending state champ, we’ve got most (of our players) back. But the first summer league game that we had, Seygan (Robins) came over and said, ‘We need her.’

Robins was not alone in that opinion.

“That first summer league game, we all told her, ‘You can play with us.’ We told her, ‘Just be patient, it’s going to take a while,” Souder said. “It’s not going to happen overnight.

“She accepted her role, and she’s real humble, so she fit in great with these kids. They’re selfless, and she’s the same way. She waited her turn, was patient, and made the most of (her opportunities).”

McCombs has scored in all but three of the games in which she has played this season, and her best game prior to the postseason was in Mercer’s 82-55 victory over Lincoln on Feb. 6, when she had 14 points and four rebounds.

She said she had gradually been finding her comfort zone over the second half of the season, and it was that night that she knew once and for all that she belonged.

It was in the rematch with Lincoln, which came within a whisker of denying Mercer its fourth straight regional title in a semifinal that went down to the wire, that McCombs was at her best. She went 7 for 13 from the field and 6 for 7 from the foul line to help the Titans survive.

She said while it was a very difficult game, it was very satisfying as well.

“It was one of my best games, and it’s by far the best game that I’ve had here. I just have to continue to do that for my team,” she said.

A day later, she played 22 minutes in the title-clinching win over Casey. She scored six points in less than 90 seconds in the first quarter and had four points and three rebounds in the fourth quarter to help Mercer put the game away, and she finished with 10 points and four boards.

McCombs’ production in the regional tourney raised her scoring average from 5.4 points per game to 6.1, and she ranks second among Mercer’s regular players in field-goal percentage (.468) and third in both 3-point percentage (.358) and free-throw percentage (.745).

McCombs has outside shooting range, an explosive first step that allows her to get to the basket and a mid-range game as well. And Souder said she has loads of potential.

“I think she’s got a lot of room for improvement,” Souder said. “Her upside is huge. She’s going to make a good college player for somebody.”

McCombs and Channing Lewis, a sophomore guard whose minutes also have been on the rise in the second half of the season, give Mercer better depth and options on offense – both girls can also play the point – as the Titans try to become the first team to repeat as state champions since Lexington Catholic in 2005 and ’06.

“We don’t drop off much,” Souder said.

McCombs, whose Knox Central teams never made it past the first round of their regional, said she’s looking forward to being part of the action instead of part of the crowd at the Sweet 16.

“It’s going to be a great feeling,” she said.