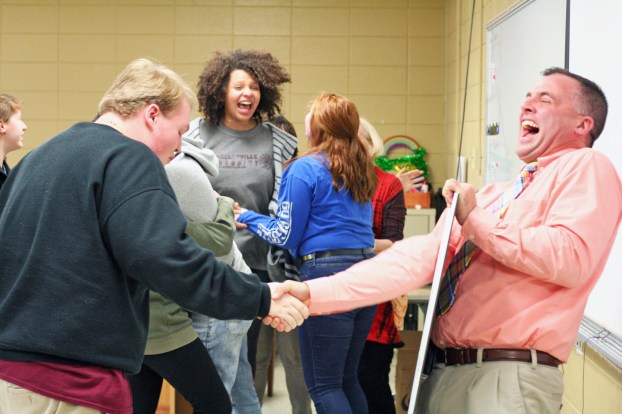 Kendra Peek/kendra.peek@amnews.com Ian Birney shakes hands with Boyle County High School Principal Mark Wade, after he presented a $10,000 check to the drama class at the high school, while students in the class rush teacher, Frieda Gebert. The drama department was one of 50 schools across the state to receive a $10,000 grant from R.I.S.E. (Recognizing and Inspiring Student Expression) America and NBC.

What they first believed to be a somber occasion turned joyous for drama students at Boyle County High School Monday afternoon when they learned the school was awarded a $10,000 grant for the theater program.

“It means everything,” said senior Riley Burke, after learning the good news. “We’ve never had anything this big for the theater.” 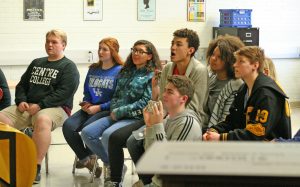 Kendra Peek/kendra.peek@amnews.com
Students in the drama class at Boyle County High School watch a video featuring some of the stars from R.I.S.E., the television show, congratulating students on the school being awarded a $10,000 grant from R.I.S.E. (Recognizing and Inspiring Student Expression) America and NBC for the drama program; in the foreground, the check presented to the class by Principal Mark Wade.

However, to surprise students, drama teacher Frieda Gebert had Principal Mark Wade enter the class and pretend to have bad news for the students. He then unveiled a large check, which Gebert printed up, as he revealed the good news.

Students cheered, jumping up to rush Gebert, many with tears in their eyes.

Gebert, who has been teaching drama in the Boyle County Schools since about 2013, said the money is going to mean the world to the department.

“This will really help,” she said.

The grant was awarded to 50 schools in the United States from the Education Theatre Foundation, a non-profit organization dedicated to shaping lives through theater education, according to a press release from the organization. The grant was facilitated by the network NBC and with Recognizing and Inspiring Student Expression (R.I.S.E.) America. The network is debuting a show called “Rise,” on March 13, about a high school theater department and its effects on a small town.

Right now, Gebert said, the drama department shares a room in the high school, but she hopes the money will allow them to convert some spaces to a small theater or performance space.

“We don’t have a space that is ours,” Gebert said, explaining they rent out local theaters.

Their upcoming production, “Sister Act,” will be 7 p.m. May 3 and 4 at Ragged Edge Community Theatre in Harrodsburg. 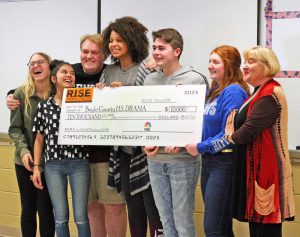 Kendra Peek/kendra.peek@amnews.com
Skylar Hensley, Gloria Valencia, Ian Birney, Alyssa Wray, Riley Burke and Rebekah Hagen, gather with teacher Frieda Gebert for a photo after learning that the Boyle County High School was awarded a $10,000 grant from R.I.S.E. (Recognizing and Inspiring Student Expression) America and NBC for the drama program. The six students produced the class’s video entry into the competition; the school is one of 50 chosen across the country.

Sophomore Alyssa Wray said she’s excited about the upcoming production, which she has a large role in, and what the money could mean for it.

Wray said the school’s drama department has been getting more recognition and having bigger shows in recent years. She was almost speechless, tearing up when they learned the news.

Ultimately, the district plans to build a theater as part of the new Boyle County Middle School, but the building won’t be completed until fall 2019. Gebert’s been in on the planning process of that and said she’s excited about the new theater.

“I can’t believe we’re going to have a place to perform and teach theater. A lot of what I do is teaching technical theater — lights, sets,” Gebert said. “How do you teach someone to run a light board when you don’t have a light board?”

Even after the new school is completed, Gebert said she’d love to have a space at the high school to practice in and use as a “black box” theater, which is a simple space, painted black.

She also hopes to use the money to purchase costumes, pay to build sets or even hire someone to help with sets. 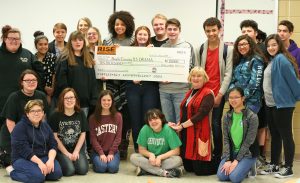 Kendra Peek/kendra.peek@amnews.com
Students in the Boyle County High School drama class pose for a photo after learning the school was awarded a $10,000 grant from R.I.S.E. (Recognizing and Inspiring Student Expression) America and NBC for the drama program.

But, before she spends any of the grant money, Gebert said she plans to talk to the students. They had a huge role in getting the grant — the students had to write, film, edit and produce a video celebrating their theater program.

“We’re definitely going to ask the students for their input on how to spend this money wisely,” Gebert said. “They earned it.”

Ian Birney was one of the students involved in creating the video, along with Wray, Burke, Gloria Valencia, Skylar Hensley and Rebekah Hagen.

Birney said he was a little in shock when Wade announced they received the grant.

“It was definitely jarring,” Birney said. “It was amazing … It felt good.”

The application also required a 500-word essay explaining why they needed the money and how the $10,000 would be used, along with a letter of recommendation from the school principal.

To receive the grant, students had to create a video celebrating their drama program. A link will be made available soon.

Follow this link to see more photos of the students celebrating.

The Boyle County High School’s next production will be Sister Act, a musical, to be performed at 7 p.m. May 3 and 4 at Ragged Edge Community Theatre in Harrodsburg. To reserve a ticket, email Frieda Gebert at frieda.gebert@boyle.kyschools.us.

When Danville-Boyle County Planning and Zoning considers amending its future land use map for Perryville, it will have an opportunity... read more