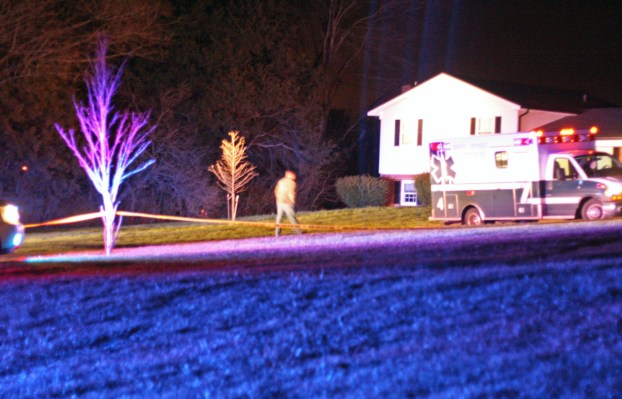 Kendra Peek/kendra.peek@amnews.com Someone walks up to a house on Shakertown Road where a person was killed Tuesday evening. Troopers with the Kentucky State Police and Boyle County Sheriff's Deputies were expected to remain on scene investigating for several hours. 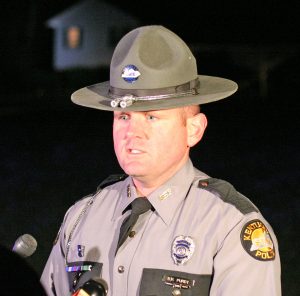 Kendra Peek/kendra.peek@amnews.com
Trooper Robert Purdy answers questions from reporters outside a house on Shakertown Road where someone was fatally shot Tuesday evening.

The Boyle County Sheriff’s Office and troopers with the Kentucky State Police responded to a house on Shakertown Road in northern Boyle County Tuesday night, where a man allegedly fatally shot another resident of the home.

Kentucky State Police spokesman Trooper Robert Purdy said the man who allegedly shot the person was found in the yard by deputies, who talked him into turning himself in without resistance.

The man has been detained by deputies, but had not been charged Tuesday night, according to Purdy. His name was not released.

No information about the victim is being released at this time.

Purdy said there were children in the house at the time of the shooting. They have been taken from the scene.

Arrangements are being made for the children to have somewhere to go, he said.

Purdy said troopers were called to the scene about 8 p.m.; he said after 10 p.m. that they expected to remain for several hours as the investigation unfolds. 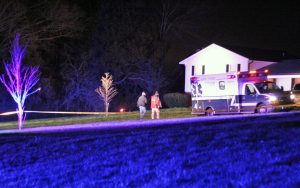 Kendra Peek/kendra.peek@amnews.com
Two officials walk up to a house on Shakertown Road where a person was killed Tuesday evening. Troopers with the Kentucky State Police and Boyle County Sheriff’s Deputies were expected to remain on scene investigating for several hours.

Lawsuit alleges Boyle inmate was strapped to chair, board for hours

A Boyle County man has sued the Boyle County Fiscal Court and jail, alleging he was restrained by jail staff... read more