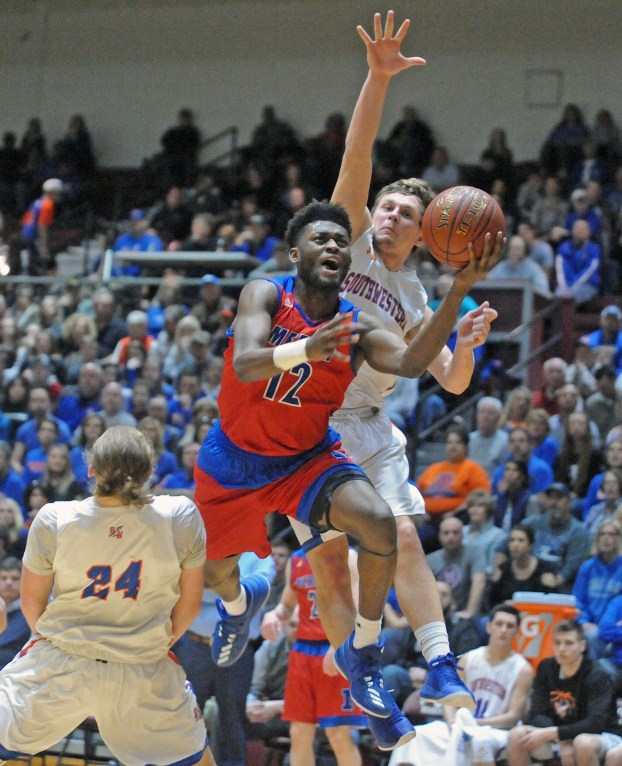 Moments before, Mercer star Trevon Faulkner drove to the basket with eight seconds left and was double-teamed at the free-throw line, lost the ball and Dykes drove the other way and finished as time expired.

The Titans had the ball with 19 seconds left with the game tied 46-46. Faulkner drove to the basket and kicked to Kaelin Drakeford in the corner for a three, but it fell short. Gunnar Gillis worked and tipped the ball back out to Drakeford, who passed to Faulkner to reset the play. That’s when Faulkner drove again and lost the ball to Dykes.

“I told Kaelin a second ago. I wouldn’t want anybody else taking that shot right there,” Mercer head coach Josh Hamlin said. “He had his feet set, he makes that shot 60 percent of the time. Great, unselfish play by Trevon. Unbelievable hustle by Gunnar Gillis, which just defines him. Trevon did exactly what he’s supposed to do right there: He drove downhill, may or may not have been some contact. You talk about the inches of the game, and you got beat by the smallest of an inch. That’s March.”

The Titans led by as many as 13 points in the fourth quarter, and Southwestern didn’t lead but for 86 seconds in the entire game: The Warriors hit the first shot of the game and last shot of the game. It’s also the first 12th Region loss the Titans have had this season.

“Hats off to Southwestern, they’re really good,” Hamlin said. “I liked our defensive gameplan, we held them to 48. Got in a little bit of foul trouble in the third quarter, decided to hold the ball a little bit. Just didn’t make enough offensive plays down the stretch, which has not been something that we’ve been accustomed to all year. But they had a good defensive gameplan as well. Hats off to them, it’s a region championship game. There has to be a winner, there has to be a loser. I hate that it ended that way.”

It was a slow start to the game: Mercer led 21-16 at halftime, with Faulkner leading the way with nine points. Hunter Stevens led Southwestern with 10 points at the break.

In the second half, Mercer kept the Warriors at an arm’s length, leading by seven points. Stevens ended the quarter with an old-fashioned three-point play to cut the lead from 10 points.

That play would spark the Warriors’ play in the fourth quarter, but it wasn’t until two minutes left that Southwestern made its run. Mercer led 44-37 with 2:47 remaining.

On the final play, Hamlin said he wouldn’t have changed who had the ball.

“I wouldn’t change whose hands the ball was in,” he said. “The ball is in the hands of Mr. Basketball. We’ll take that every single time, whether that was a foul or whether that wasn’t a foul. We didn’t finish the job. I hate it for our guys, I hate it for our seniors. Our seniors deserved the win, but you’ve got to learn from it, you’ve got to build. It’ll make us better in the end.”

SOMERSET – Josh Hamlin told his players the same thing he tells them after every game. What else could he... read more