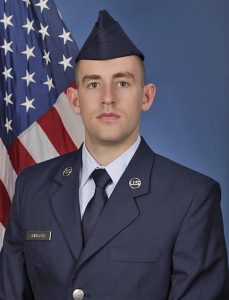 Airmen who complete basic training also earn four credits toward an associate in applied science degree through the Community College of the Air Force.
Chirigotis is the son of Lorie and Andrew Chirigotis of Danville. He is also the husband of Christa Chirigotis.

The airman graduated in 2014 from home-schooling in Danville and earned a bachelor’s degree in 2017 from Eastern Kentucky University. 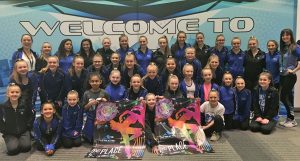 Photo submitted
The Champions Elite All-Star Dance program performed during halftime of the Harlem Globetrotters game on Jan. 13 at Rupp Arena. Feb. 2-3, the program competed at the Groove Experience Nationals in Columbus, Ohio, where they received second place national titles in their respective pom dance divisions and eam received a prestigious Gold bid and will be competing in the U.S. Finals, an invitation-only event to be held in Chicago on April 22.

The Champions Elite All-Star Dance program provided the halftime entertainment for the Harlem Globetrotters game on Jan. 13 at Rupp Arena. The program’s youth and senior teams took to the floor to perform the routines that they compete with at regional and national competitions. They were also greeted by the Washington Generals basketball team and coach prior to their halftime performance. On Feb. 2-3, the program competed at the Groove Experience Nationals in Columbus, Ohio. There, they received second-place national titles in their respective pom dance divisions and each team received a prestigious Gold bid. They will be competing in the U.S. Finals, an invitation-only event held in Chicago on April 22. 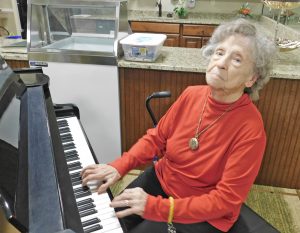 Music is therapy: Morning Pointe of Danville resident Edythe Ford says she’s got a job to do and that job is to help others using the sound of music. Ford has lived at the personal care and Alzheimer’s memory care community for a year and loves playing the piano for her friends. Above, she volunteers to play the piano for her fellow seniors. 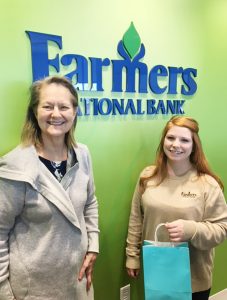 Local bank workers treated: Brenda Mayes, left, Morning Pointe of Danville resident, delivers treats to Farmers National Bank employee Amber Ruhe. Mayes originally worked at Citizens Bank in Danville where she was the jack of all trades. When Citizens closed, she went to Farmers. Mayes, along with her friends at Morning Pointe, visited local banks to hand deliver treats. Outings like this one are part of life enrichment programs encouraging seniors at the personal care and Alzheimer’s memory care community to explore and engage with their surroundings.

Feb 27 – A girl, Lilly Michele Lawless to Shyenne and Jesse Lawless of Bethelridge. A boy, Josiah Wayne Wren to Cierra Robinson and Gary Wren of Stanford. A boy, Grant Michael to Cassandra Lee Yates and Steven Michael Campbell of Danville.

March 1–  A girl, Camila Elise Rodriguez to Denise and Cain Rodriguez of Danville. 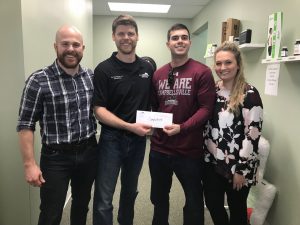 Donating scholarships: Bluegrass Chiropractic recently made a donation for the Conover Education Center for scholarships.
Pictured, from left, are Dr. Truemon Barger and Dr. Paul Ragusa, with and Wes Carter and Ariel Carter of Campbellsville University.