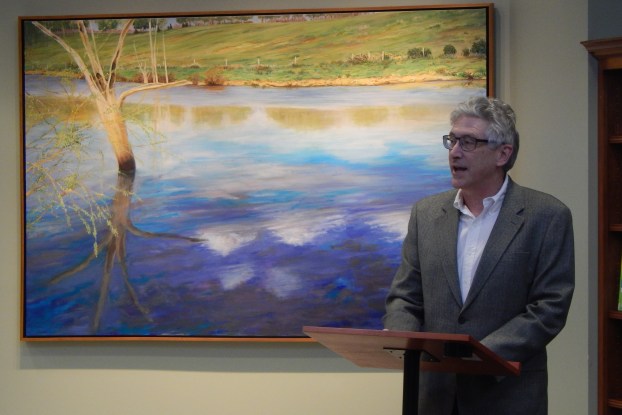 Reflections of an artist

The library received an incredible addition to its art collection Sunday, as local artist Sheldon Tapley unveiled a painting he donated in honor of Catharine Spragens.

“A public library is a gift, a house for sharing learning, literacy and culture,” Tapley told the crowd Sunday who gathered to see the unveiling. “The gift begins with the founders of the institution, and is reciprocated by those who carry it on. And we are here today to honor Catherine Spragens for that gift she made to our community.”

Spragens was Centre College’s longest-serving first lady and wife of Thomas A. Spragens, president of Centre College from ’57-’81.

Tapley told the crowd the books in the library are gifts from writers, and spoke about the importance about reading and its effects. He spoke of how when a book is loaned, the gift is passed on, and through discussion, debate and recommendation, the gift is shared again, multiplying its value.

“The resulting wealth belong to all, and endures …. in places like this beautiful building,” Tapley said. “Contributing to the collection and the adornment of this library is a great pleasure for me. I am grateful for the opportunity to share something in return.”

Tapley described his painting, “Reflection, Boyle County” as a farm pond he hopes “will seem like a window, connecting this interior space to the beautiful landscape that surrounds Danville.” 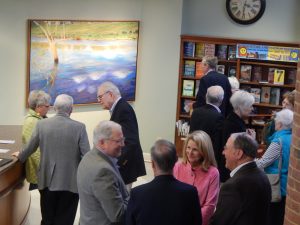 He said books and paintings “objects made from paper and ink, are transformed by imagination. The human imagination is the essential intangible component of every object we make and share. It is nearly magical, that we can we enliven objects with our minds, and that they connect us to others. We invest the places we live with meaning, and then we describe those places in art. It is cycle of experience and contemplation based on sharing.”

Tapley described “Reflection, Boyle County” as a “drowned sycamore tree, massive and pale, stands in a farm pond. Its once-leafy branches must have shaded a broad swath of the surrounding pastures. The hollow in which it grew was dammed and flooded to hold water for livestock and crops. The tree’s beautiful skeleton is like a sculpture, its base cloaked in the blue of the pond’s surface. The water, rippled by a breeze, has captured the colors of the sky, the shapes of clouds that fly freely overhead, and the dark inverted image of the sycamore.The farm changed ownership; the cattle were sent away; the pond became a swimming hole. One of the swimmers was the artist, who spent part of his time there admiring the grand wreck of the tree, and the light on the water.”

Tapley is a nationally known artist with works in private and public collections all over the country, as well as having been published in several major arts publications. He was featured in a KET documentary, “Looking at Painting,” and is a recipient of an Al Smith Fellowship from the Kentucky Arts Council.

He taught at Centre College for 35 years, and was awarded a Cantrell Professorship and the Kirk Award for Excellence in Teaching, and is currently Stodghill Professor or Painting and Drawing.

Born in Venezuela to British parents—Ron and Sylvia—Tapley was raised in Europe and North America. He and his wife, Ann Silver, are longtime residents of Danville. Their children, Rachel and Peter, attended Danville High School and Centre College. Tapley’s father now resides here, too. 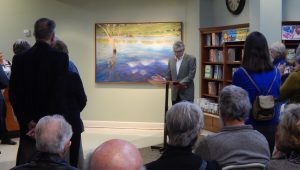 More than 500 people turned out at the Community Arts Center on Friday night for the opening reception of the... read more