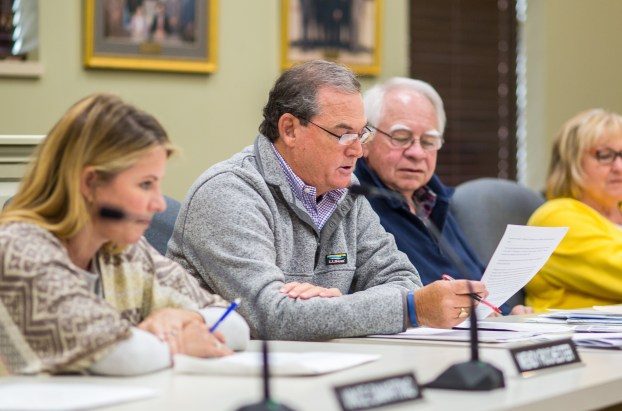 The Danville-Boyle County Planning and Zoning Commission began its meeting Wednesday with a Christian prayer, as it has for as many years as P&Z Chair Jerry Leber can remember.

But whether those prayers are appropriate was a matter for debate at the end of Wednesday’s meeting. Ultimately, the P&Z Commission voted 6-3 to continue opening its meetings with Christian prayers.

P&Z was asked to end its practice of praying during public meetings by an individual prior to the commission’s January meeting. Leber said at the time he wasn’t going to identify the individual, but would see if they wanted to speak at the February meeting.

The topic wasn’t addressed at the February meeting, but in commissioners’ packets for March’s meeting was a memo from Danville City Attorney Stephen Dexter, with an addendum from P&Z attorney Henry E. Smith, about prayer in public meetings.

The P&Z Commission can hold prayers at the beginnings of its meetings, as long as it does it the right way, according to the memo.

Dexter wrote that an opening prayer is “permissible … however, that prayer should be general in nature. To the extent that the prayer is a specifically Christian prayer, or is directed to Jesus Christ, then the practice will risk a judicial challenge.” 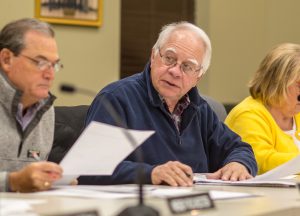 P&Z Chair Jerry Leber says opening commission meetings has been a tradition for longer than he’s been on the commission. (Photo by Ben Kleppinger)

Leber’s opening prayer Wednesday was made to “God and Father in Heaven.” He asked God to be with the commissioners in their decisions, protect people serving in the military and thanked God for the local community.

“Guide, guard and direct us in all things. In Christ’s name we pray, amen,” Leber said.

The attorneys’ memo wasn’t discussed until it appeared the commission may be close to adjourning. Commissioner Mary Beth Touchstone asked about the prayer memo in her packet. 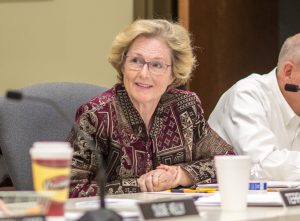 “Is that something we’d like to discuss for a minute?” Touchstone asked.

“If somebody wants to bring it up,” Leber responded.

“I think one of the reasons that people came to this country was because of religious persecution,” said DiMartino, a world-renowned trumpeter who has traveled the world.

DiMartino said he’s seen many settings where prayer was handled in a way that didn’t make those who weren’t followers of a particular religion uncomfortable. 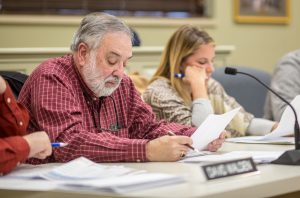 “I think that people of faith pray frequently and I think they should be encouraged to pray as often as they find necessary,” Touchstone said. “My concern is we’re a part of commerce that’s being done in our community, and it appears to me that the price of admission is to bow your head so that we can pray … I’m not comfortable with that. I’m not comfortable with religion being the price of admission to having your services in this town.”

Leber asked Smith to comment on his opinions in the memo.

“The most recent case law that is applicable to us supports the practice so long as it doesn’t do some of the things we’ve been warning against,” Smith said. “If it’s used as any kind of exclusionary (practice) or harassment, then that’s a problem.”

Smith said praying “even in a particular religious faith — that’s been upheld.”

“What some other jurisdictions have done that’s been looked favorably upon is to invite members of the public, various people to come and offer that prayer. And sometimes that provides an opportunity for other faiths to be represented,” Smith said. “But the contents of particular prayers aren’t really ever scrutinized. It’s more what the pattern or practice is.”

Touchstone asked if there’s any requirement that P&Z has a prayer; Smith said there is no such requirement.

“I think it’s a fact that the United States Congress has a prayer before they (meet),” P&Z Vice Chair Jeffrey Baird said. The Kentucky legislature, Boyle County Fiscal Court and Danville City Commission all begin their meetings with prayer as well, Baird said.

Commissioner Susie Kelly said prayer opening P&Z meetings “has been a long-standing tradition and one that I find very favorable.”

“I enjoy that opening and sort of call to order of our meetings,” she said.

Commissioner David Walden said he supports the idea of prayer.

“As a Christian, I believe it’s important. To make a lot of important decisions, we need all the guidance that we can get,” he said. “We don’t necessarily, in my opinion, have to ask the audience to join in, but just begin the meeting with it. And they can join in by bowing their heads or not.”

Touchstone asked if Walden was recommending that P&Z avoid asking the audience to bow their heads. Walden said, “if the rest of you all agree to that, yes.”

Smith noted Leber did not ask anyone to bow their heads prior to his prayer at Wednesday’s meeting.

Kelly then made a motion to continue with prayer at the beginning of the meetings as P&Z has traditionally done. Baird seconded the motion.

DiMartino asked if the prayer agenda item could acknowledge “a broad range of religious beliefs.”

“I think that’s appropriate myself,” he said. “As a person that’s been in a lot of meetings with a lot of different people around the world, maybe I’m just sensitive about that. We have a lot of guests, we have a lot of people come in here from businesses and businesses from other countries … I just would hate for anybody to feel pressured or not agree with what we think about.”

DiMartino said “the more universal we can be in our blessings, it brings people in and doesn’t put them out. And I don’t know how to do that — I’m not an expert theologian here.”

“Neither am I,” Leber said.

DiMartino suggested P&Z could consult with local theologians to come up with a prayer that would be “pretty cool that makes everybody feel pretty good.”

“They do it all over the world — they speak in a more general fashion,” he said.

Commissioner Terry Manon suggested P&Z start its meetings with a moment of “silent reflection, where everybody seeks whatever seeking they seek, in order to reflect on what we’re going to be doing today.”

Baird said the two governments that appoint P&Z commissioners — the city and county — both open their public meetings with prayers.

“They certainly do business,” Baird said. “I don’t see how we’re different from them.”

Touchstone asked what would happen if demographics changed in the community so that Christianity is no longer practiced by the majority of local residents.

“We need to be aware that some day, somebody else may be on this commission who (has) a different belief and may want (a non-Christian prayer),” she said.

Baird said he believes the Supreme Court “summed it up pretty well” and quoted a Supreme Court ruling cited in the attorneys’ memo:

“The opening sessions of legislative and other deliberative public bodies with prayer is deeply embedded in the history and tradition of this country.”

Resident Sarah Vahlkamp said, “I’m not against having a prayer at the beginning. I think it’s appropriate. And it doesn’t have to be a moment of silence. And I like the things that Jerry says. So I’m fine with that. I just think … it would be better not to mention a certain religion.

“Most of us sitting in this room probably are Christians and we’re used to saying — I’m just going to come out and say it — ‘in Jesus’ name.’ … If Jerry didn’t say that, then I think everything he says is very appropriate. But that does highlight one particular religion, and maybe that would help.”

Smith said he wasn’t sure if there needed to be a motion to approve prayer — “I think the discussion is productive enough.”

“But what Ms. Touchstone highlighted — one particular phrase she used I think is something that echoed in the courts. And that’s that we don’t want there to be any price for admission for doing business with us. So as we’re wrapping this up, you should think about maybe not saying ‘please bow your heads’ or anything like that. That’s something that’s worth considering.”

Leber called for a vote, but DiMartino continued the discussion briefly.

“I think we can have the prayer. I think we’re discussing what’s in it,” DiMartino said. “Maybe some people are opposed to it altogether. I’m not, personally. But I think we … need to be voting on if it has a certain content or not, not the fact that we have it or not.”

Walden said the commission has to vote on the motion as Kelly made it. Smith said the motion could be modified.

Speaking to DiMartino’s suggestion of voting on the content of prayers, Leber said, “I don’t know how we control that.”

Walden, Commissioner Wendy Rochester, Baird, Leber, Kelly and Commissioner Jim Boyd voted in favor of keeping the prayers as they have been. After clarifying the vote was to change nothing about the prayers, DiMartino voted against the motion, as did Touchstone and Manon.

Kentucky State Police have released the names of the woman killed in a fatal shooting Tuesday, and the man accused of... read more