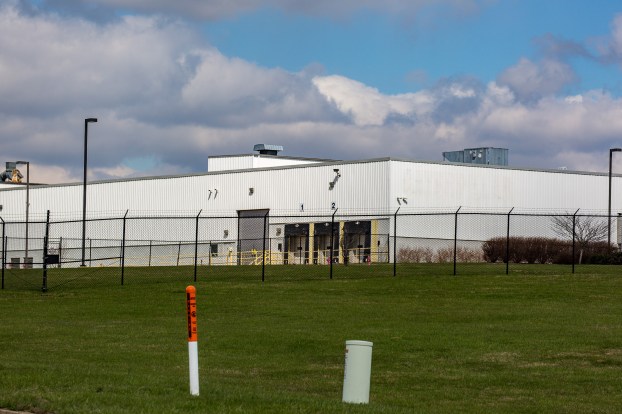 The former Caterpillar facility on Corporate Drive no longer features Caterpillar signs; Adkev Inc. is in the process of renovating the building and building an addition for dye storage. (Photo by Ben Kleppinger)

Renovations of the old Caterpillar factory are underway and the company planning to use the facility, Adkev Inc., received approval this week to build an addition.

Danville-Boyle County Planning and Zoning commissioners held a public hearing Wednesday and approved a site plan for a new 5,200-square-foot building on the former Caterpillar property.

The building will serve as a dye storage area, allowing all of the original building to be used for processing, said Milton Hammons, a representative for Denham-Blythe, the general contractor working for Adkev.

According to the Danville-Boyle County Economic Development Partnership, Denham-Blythe has already begun renovation of the original Caterpillar facility.

Adkev is a plastic injection molding from Indiana that announced plans in June 2017 to invest $15.7 million in the recently closed Caterpillar plant and create 70 jobs there in a first phase. There are “plans to grow to 150” employees in the future, according to previous statements from EDP President Jody Lassiter.

Danville and Boyle County plan to give Adkev almost $350,000 in payroll tax breaks if the employment targets are met.

P&Z Director Steve Hunter said Wednesday’s site plan approval by the P&Z Commission was needed because the local zoning ordinance requires approval for any building that exceeds 3,000 square feet. The building represents an expansion of only about 2.7 percent of the existing “188,000-plus-square-foot” building, he said.

Adkev has been around since 1987 and currently operates two facilities — a corporate office in Woodland, Indiana and another facility in Monticello, Indiana.

Caterpillar first announced plans to close its Danville facility in 2015; the plant was shuttered in 2017.