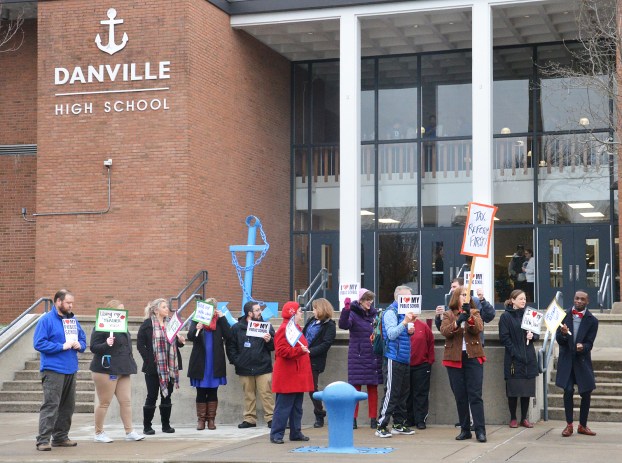 Teachers at Danville High School hold signs as they participate in a Kentucky Education Association organized "walk-in" voicing their opposition to Senate Bill 1.

DHS teachers hold walk-in, instead of leaving their kids, in hopes of getting lawmakers’ attention over pension issue

The legislation concerns the state pension plans and makes funding cuts the teachers say are unacceptable. 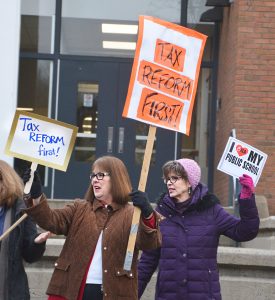 While holding signs reading “A pension is a promise,” “I love my public schools,” teachers greeted students walking into the building and waved at vehicles passing by — some honked in support of their demonstration.

As the song, “I Won’t Back Down” by Tom Petty and the Heartbreakers blared through a speaker, Walker Dean, a math teacher, held up two signs reading “Tax reform first!”

“I want to be in Frankfort! They think we don’t know what’s going on, but we do,” Dean said.

Pat Calvert, a science teacher at DHS, said the walk-in was organized by the Kentucky Education Association and involved 28 schools in order to give teachers “a way of expressing themselves without taking a day off of work and going to Frankfort, which is where we would all like to be.”

She said it was also a way for teachers to increase public awareness of the problems they see with the way Kentucky legislators are trying to change their pension plan.

Social studies teacher Joey Sallee said the walk-in is preferable to a “walk-out.” 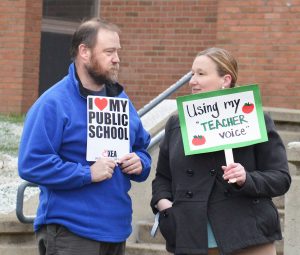 “I don’t think any of us relish the idea of some type of strike or walk out,” Sallee said. “I think nobody wants to think in those terms, but then, you read about folks in West Virginia… Well, they got something accomplished. Why would it take people not coming to work to fix this problem? It’s fixable. It can be fixed, it can be made right. Make it right.”

Sallee said, “We’re (teachers across the state) holding up our end of the bargain. We come in, we teach, we coach, we provide opportunities… We’re not asking for a whole lot in return.”

Sallee added, “It’s a matter of finding the revenue and honoring what was promised.”

“What kind of system legally takes money that you have earned and then someone can turn around and say, ‘Well, that may not all be available to you when it comes your time to retire?'” Sallee asked. “If it’s my money, don’t take it. At this point, if you’re (legislators) telling me it may not be there, then don’t take it. Let me keep it. I’ll invest it myself.”

Jane Dewey, director of Arts Education in the Danville school system, said she sees this as a two-fold issue.

Pension reform is a big problem, Dewey said. She said legislators haven’t taken a real look at what can be done to increase the state’s revenue before altering state employees’ pension plans. “I think there are ways that we should at least be looking at and considering in this state before we attack what is our students’ futures.”

Dewey said, “I have asked that question several times of legislators and I’m often brushed off.”

Calvert said many teachers still don’t realize exactly what’s going on with their pension plans because they trust government officials to give them all of the information they are considering.

However, state legislators have been discussing the pension issue “behind closed doors with not inviting in stake holders, like our KEA representatives and other people in education. I think they expected us to be so busy with our jobs — because we are — that we wouldn’t notice all this going on.”

Calvert said she thinks legislators should look at ways of raising revenue “before we just dive right in and cut public education. It really concerns me that people aren’t aware of what’s going on.”

Sallee said he has a “simplistic” view about the pension plan concerns. He said he’s been contributing to his state pension plan for 13 years, “with the understanding that it’s going to pay me back in the end. But now it looks like that may not be the case.”

Sallee said it’s a matter of trusting officials who are supposed to be handing the pension plans, but because for years there has been a lack of funding for the program, his trust is gone.

“Don’t take my 10 percent out every two weeks. Let me have it and I’ll invest it myself, because at this point it looks like I could do a better job of investing it as anyone else has done.”

Dewey said legislators should also look at the bigger picture. By cutting public education funding and altering or eliminating their pension plans, “It’s going to hurt our students and our schools because you’re not going to be able to attract the kind of educators that are going to give our kids a quality education.”

Teachers depend solely on their pension plans when they retire because under state law, they’re not eligible to draw Social Security, even if they paid into it for years before joining the education system, Dewey explained.

Being on a state pension plan, Dewey said, teachers are also not allowed to draw Social Security that their spouse had accumulated over the years when they pass away.

Dewey said she wants to know where the legislators’ good-faith effort in all of this toward teachers and public education is.

Calvert said anyone can visit the KEA Facebook page and follow what the legislators are discussing pertaining to education and pension funding. She said it provides frequent updates on the proceedings, and that it’s reliable.

Dewey said, “We’re asking for what we’ve put in and for what we’ve been promised with regards to the pension. And we’re also asking that they consider our students’ well-being first and the future of Kentucky by not cutting from education, whether it’s our pensions or the funds that fund education — especially without considering how they can raise revenue.”

Dewey gave the example that if she couldn’t pay her bills, she would have to find another better paying job.

“I would have to raise revenue. I wouldn’t be able to cut everything.”I’m not sure the legislators (and the governor) are making a good faith effort in that area,” Dewey said.

Sallee said the teachers here didn’t want to take a day off and go to Frankfort because they know what a struggle it is for the school system to schedule substitute teachers. “We struggle with that. No one wants their kids to suffer,” by not having teachers in the classrooms.

Calvert added she sometimes thinks the governor actually wants them to walk out. “… I feel the things he says that he wants us to leave work and go in mass so that he can criticize us for leaving work and leaving our kids behind.”

Sallee said he thought it was good for high school students to see their teachers standing together for a cause they believe in.

Later in the morning, Sallee said his students in every class wanted to know what the demonstration was about, so being a social studies teacher, he saw it as “a chance to communicate with them on a real life issue… This is real life; people are standing out in the cold for a reason and they’re demonstrating.”

He said he was able to discuss freedom of assembly, among other issues. He said he hadn’t discussed the teachers’ opposition to Senate Bill 1 until Thursday “because it’s been my problem and I try not to bring my problems in to them. But when they see you out doing something like that, they’re supportive.”

He said sometimes he wonders if students really care about the lessons he’s teaching in social studies classes, but Thursday, a student asked him if what the teachers were doing was, “sort of like the labor movement.”

Sallee said he taught a lesson on the labor movement before Christmas and the student was able to draw back on it.

“That was sort of neat.”

The 28 schools scheduled to hold “walk-in” rallies on Thursday were in Clark, Franklin, Garrard, Lincoln, Montgomery, Rockcastle, Woodford and Boyle counties. Teachers in the Danville Independent School District participated from Boyle County, according to the Kentucky Education Association.