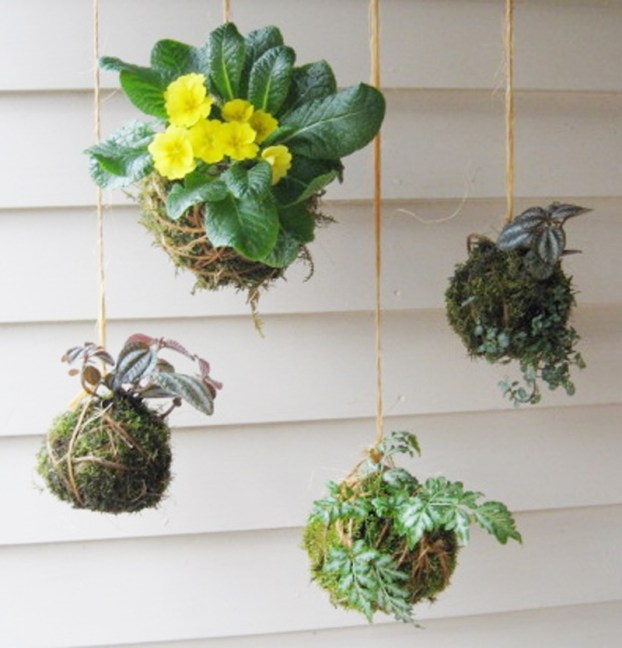 Everything you need to know about kokedama

The days are getting longer and the sun is shining brighter, but it’s still too early to do much in the garden. We haven’t seen the last of winter yet, in spite of recent record highs. If you 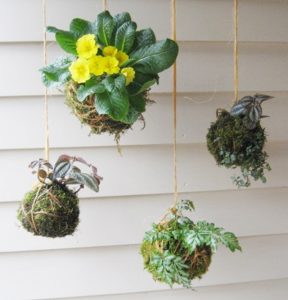 can’t wait to get your hands in the dirt and play with plants, here’s an easy indoor project. Garden Club members Diane Meshako and Alice Biggers helped me try it for the first time.

Kokedama, sometimes called string gardens or Japanese moss balls, are a form of bonsai that dates back to the Edo era in Japan, circa 1600. Loosely translated, “koke” means moss and “dama” means ball. The practice comes from a centuries-old tradition of exhibiting the exposed root ball of a bonsai specimen on a plate to highlight its elegant root system. In time, moss grows on the roots, enhancing the display. Today kokedama are usually formed into spheres and made with houseplants instead of the miniature trees and shrubs of traditional bonsai.

These little suspended gardens are just as beautiful to look at as they are fun to make. Each plant is contained in its own moss wrapped ball of dirt and tied with string. They are perfect for small spaces. Since the balls float in midair, they don’t take up surface space, although they look equally attractive sitting on a flat rock or dish. 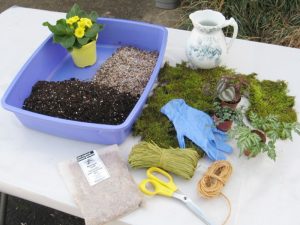 After collecting the supplies, it was as easy as making mud pies. The balls are made from a combination of seven parts potting soil to three parts bonsai soil. Bonsai soil, called akedama, is a naturally occurring granular clay-like mineral used as soil for bonsai trees. It can be purchased at some garden centers or online. Akedama is prized for its ability to retain water and nutrients while draining freely. It looks a lot like cat litter, and I learned that clay cat litter with no additives can be used instead of akedama for this project, and it’s a lot cheaper. Some sources claim potting soil alone works just fine, and that would be even easier.

If you feel inclined to have a little fun making mud balls, here’s how to do it. You’ll need potting soil, bonsai soil or clay cat litter, a small plant, sheet moss, twine, water, scissors and gloves. You can peel up sheets of moss from your own garden or buy dried sheet moss at Hobby Lobby and soak it in a bucket of water for half an hour, then drain.

Moss can’t take much sun, so choose shade loving houseplants. There are hundreds that prefer bright, indirect light. Very small plants will be easiest to work with. We used a fern, a peperomia, a blooming primrose, and an unidentified sprawling plant with tiny leaves. You might even try two plants in one ball.

Combine potting mix and bonsai soil in a tub and add water until it will hold together after squeezing out excess water. Remove your plant from its pot, shaking off excess soil. Sculpt a ball around its roots, adding damp soil mix as needed. 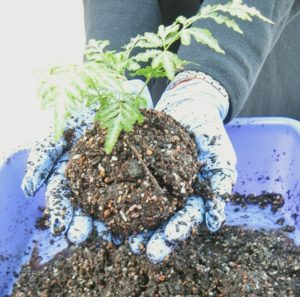 Lay out the sheet moss upside down, place the ball in the center, and enfold the ball in the moss, piecing it if needed. Trim off any excess moss. Wind twine around the ball in a random pattern until it feels secure. Some people use fishing line so it doesn’t show, but I like the look of string. Attach a length of string to the top or side of the ball and it’s ready to hang.

Since it’s not in a container, the ball will need water twice a week, or whenever it feels lightweight. Simply soak it in a bowl of water for five to 10 minutes, then hang over a sink or bowl until it stops dripping. Once a month, add a few drops of liquid fertilizer to the soaking water.

It’s not too soon to be thinking of your summer garden. Wouldn’t these be pretty hanging from a tree limb? A bigger ball could contain a hosta or large fern, with small balls of begonias or impatience. If you don’t mind frequent watering, they would make a striking garden feature.

To learn more about the Garden Club and see a schedule of events, see www.thegardenclubofdanville.org.

For an indoor gardening project, try making kokedama, small houseplants encased in a ball of soil, wrapped in moss and tied with string. A collection of kokedama is called a Japanese string garden. These little suspended gardens are just as beautiful to look at as they are fun to make, and perfect for small spaces. Since the balls float in midair, they don’t take up surface space.

Local author Heather Henson has made it to the semi-finalist list for a 2017 Dr. Tony Ryan Book Award. Her... read more