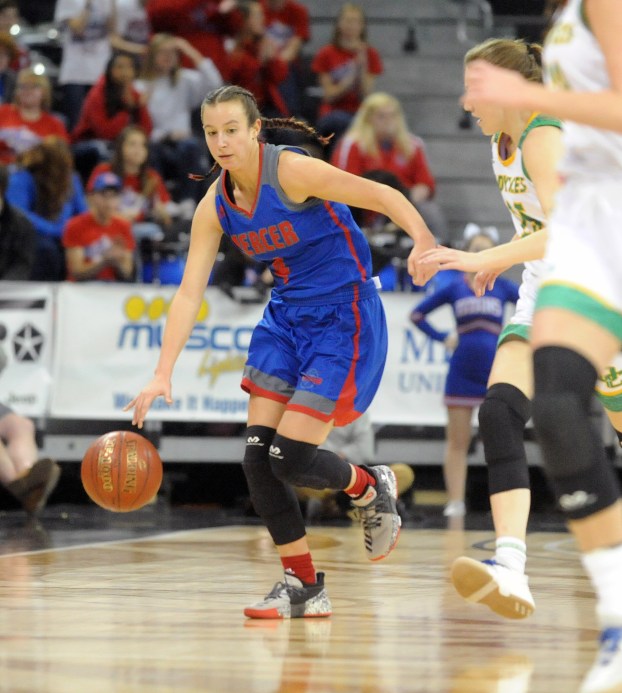 Titans hold on vs. Owensboro Catholic

HIGHLAND HEIGHTS — It wasn’t the most characteristic finish for Mercer County.

The Titans held on in the state tournament quarterfinals against Owensboro Catholic on the backs of their seniors, winning 67-66.

“I guess that’s the true form of survive and advance,” Mercer County head coach Chris Souder said. “Once again, give Owensboro Catholic credit. We kind of had to play their game, we couldn’t get much transition going. They’re so big and they knocked down big shot after big shot. Give them a lot of credit. We missed some free throws again, but the people I had on the free-throw line, I’ll do it every time.”

The Titans finished 9-for-15 from the foul line and were 6-of-11 from the stripe in the final quarter, helping Owensboro Catholic come back. The Aces outscored Mercer 24-17 in the final eight minutes.

Owensboro Catholic had three losses to teams Mercer had beaten this season, but the Aces’ length and methodical play caused problems for the Titans.

“I think sometimes, we’ve won so much, people just expect that we’re going to blow everybody out,” coach Souder said. “They know getting here, nothing is going to be easy and everybody is going to give them their best shot.”

Through three quarters, Mercer was in control. The Titans led by as many as 17 points and were ahead by eight points after three quarters.

But in the fourth, the Aces stormed back, cutting the Titans’ lead to three multiple times and one point with eight seconds left.

Two of Mercer’s five misses in the final quarter were at the front end of a one-and-one opportunity for Seygan Robins. She was having an issue with an eye contact after taking a hit.

“Seygan was having a contact issue, we found out, thought she didn’t have one in there but it was folded over so we were trying to put two in there,” coach Souder said. “So like she said, we’ll go with that, that’s why she missed those free throws.”

Robins scored 18 points and had a game-high nine assists in the win. She was 4-for-5 from three-point range.

Emma Davis led the Titans with 21 points and hit five shots from deep.

“I guess, it kind of seems like that,” Davis said. “But I couldn’t have done it without them.”

Coach Souder said the team did well to find Davis and open shooters throughout the game. The Titans finished with 18 assists.

“I gave her a big hug after it was over. I told her after the regional tournament that I needed one of those from her, and she does it every year that we’re here,” coach Souder said. “I could tell early that she was feeling it and we did a good job getting her the ball. She had 21 points and we definitely needed all 21 of them tonight. That’s the beauty of this team, it’s always somebody. We’ve got Seygan and Emmy (Souder) most of the time, then it’s Faith (Lake), Lexy (Lake), Emma, Toni (McCombs), Channing (Lewis), it’s always somebody that steps up. That’s what you want from your seniors, they step up in big games and Emma was huge.”

Lexy Lake scored nine points and was 3-for-7 from three-point range. Her sister Faith had just three points, but two of them came when the game was on the line.

Faith said she and her fellow seniors know to stay calm in late-game situations.

Coach Souder admitted he was a little worried because Owensboro Catholic had momentum down the stretch, but trusted his five seniors in the end.

“Probably worried a little bit, just because it was a big momentum swing there and we were just trying to hang on there,” he said. “Lexy hit a big three in the corner, Channing got a big bucket there late and Seygan got an and-one. We did just enough. It gets a little tense, but they’re never going to stop playing. That’s the good thing. We were trying everything to slow them down a little bit, they just got the momentum and we were fortunate to hold on.”

For Mercer’s final possession, Souder put his trust in his five seniors, and Faith delivered.

Now, the Titans are back in the final four for the third time in as many years. They’ll face the winner of George Rogers Clark and Elizabethtown on Saturday at 6:30 p.m.

Sunday’s championship game is at 2 p.m.

“It’s incredible, I feel like it doesn’t really seem like it’s been three years to us,” Robins said. “We’re really thankful to be back here, especially after that game.”