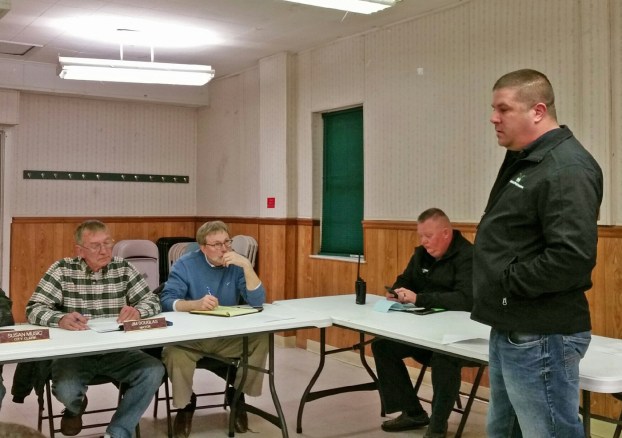 Kendra Peek/kendra.peek@amnews.com Assistant Fire Chief Dewayne Taylor addresses the council regarding a truck that was hit during a December crash. 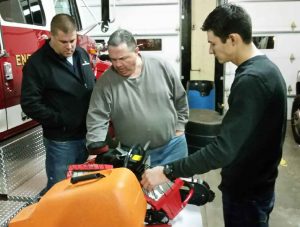 Whether or not Junction City will accept a check for between $25-30,000, after a utility truck used by the fire department was hit while responding to a December call, became a heavy discussion Thursday night.

“If they’re paying for everything, I don’t understand what the problem is,” said Council member Pete Kendrick.

“If one of you guys would like to sign off on something like that, you can. But this man right here will not,” said Mayor Jim Douglas, referring to himself. “If I was an insurance adjustor and I looked at that truck and I looked at this sheet, I would deny any claim.”

The utility truck was rear-ended while parked as firefighters were responding to a crash on U.S. 127 on Dec. 6. No one was injured, but the truck was deemed badly damaged, along with equipment which was on it. The department also has an engine that is used by firefighters.

Shelter Insurance, the insurance for the driver of the other vehicle, came and looked at the truck and the damaged equipment, said Taylor.

The company told the department they could keep the equipment and the truck to do with what they would.

Douglas said he didn’t appreciate having been “kept in the dark.” 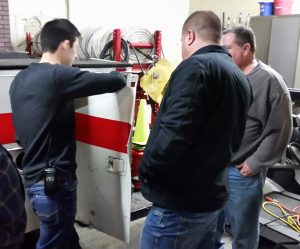 “I’m going to be the one that’s going to have to sign off. I don’t believe all of this stuff was damaged in this little wreck,” he said. “Shelter Insurance needs to come to me with any claim.”

Taylor said he couldn’t say whether or not equipment, some of which is more than 10 years old, was damaged prior to the crash.

“I do know that the cribbing was not split and it is split now,” he said.

Council member Kenny Baldwin asked if everything worked before.

“As of last check of, yes,” Taylor said. The equipment is checked once or twice a month at the fire department trainings.

Douglas said if the adjustor would come talk to him he would be “good with that.”

Taylor invited the council members to come look at the truck and equipment — only council member Bill McCowan followed firefighters to the station after the meeting.

The truck and equipment would have to be signed off on by a certified inspector before it can be put back into service, said Public Information Officer Jim Harris after the meeting.

The fire department is also in need of new gear and several self-contained breathing apparatus (SCBA), Taylor told council members. He asked the council for their blessing to use the $10,500 given to the department from the State Fire Commission, commonly called state aid funding, toward the SCBAs.

A portion of the cost for eight packs would also have to come from the department’s existing equipment budget.

“We’ve got it in our budget to be able to come up with the rest of the money,” he said.

The department’s current air packs expire this year; the state aid funding expires at the end of January.

“I don’t think this is something we can spend on tonight,” said Douglas.

“I think we need a little chance to study it,” he said.

Taylor also said the department needs gear for at least four firefighters, because they have gear that expires this year. It has a 10-year shelf-life.

“Even if it’s brand-new in the package, it’s done,” said Baldwin, explaining to other council members.

Douglas asked for an itemized list of what the department has.

“In recent years, we have bought a large amount of gear,” he said.

Baldwin said, “We have bought a lot, but there’s a lot going out (of date), too.”

Council member McCowan pointed out that Chief Troy Gammon gave him a list last month. Douglas said he hadn’t seen it, but would have to look into that.

Taylor said if the city didn’t replace the gear and the SCBAs, the department would be in trouble.

“If we don’t get some of this stuff, we aren’t going to have firefighters to fight fires, or you open yourselves to liability,” he said. “We are either going to have to get gear or shut down. That’s what it’s coming to — either have the county come here to do stuff or we need to get stuff to protect the citizens of Junction City.”

Council members cautioned against any fire fighters using outdated gear. They also asked for a plan to be laid out for next month, with what the department plans to use the budget for the rest of the year on.

Kendrick said, “We need a plan, with (the state aid) included so we don’t come up short.”

Taylor they are working to come up with a plan to buy a few sets a year, so all the gear doesn’t have to be replaced every 10 years.

He also said that old gear can be sold to companies who use it to make bags, wallets and a variety of other items for purchase, so it might be a way for the department to generate more money to purchase new gear.

Unanimous support was given to a medical cannabis resolution presented to the Junction City Council Thursday night. “You may be... read more