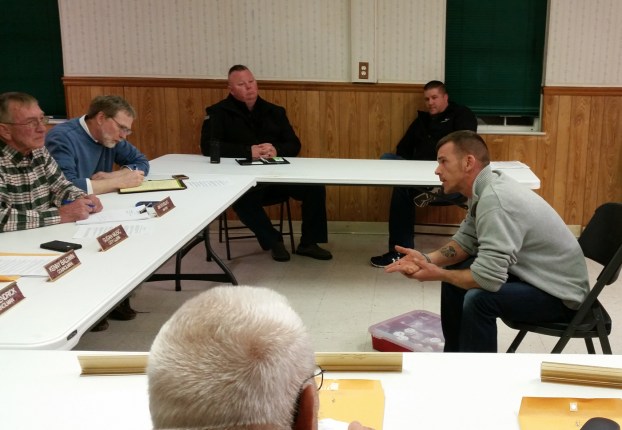 Kendra Peek/kendra.peek@amnews.com Nick Risden addresses the Junction City Council and city officials regarding medical cannabis during the meeting Thursday night. At his feet sits the container Risden uses, which contains the more than 50 medications he has to take to get through the day after he was bit by a tick in May 2017.

Unanimous support was given to a medical cannabis resolution presented to the Junction City Council Thursday night.

“You may be anti-cannabis. Until you need it two or three years from now; until someone you love needs it,” said Nick Risden, a Boyle County native who spoke before the council.

In May 2017, Risden was bitten by a tick while on his farm in Mercer County; he contracted at least nine tick-borne diseases, which have taken a toll on his health.

“I’m asking you to open your mind … I just want help. I don’t want to be this sick,” Risen said. 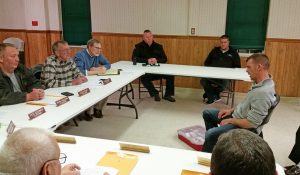 Kendra Peek/kendra.peek@amnews.com
Nick Risden addresses the Junction City Council and city officials regarding medical cannabis during the meeting Thursday night. At his feet sits the container Risden uses, which contains the more than 50 medications he has to take to get through the day after he was bit by a tick in May 2017.

Risden showed the council the amount of medication he currently takes, displayed in a large plastic container.

He wears a catheter in his chest and travels to Washington, D.C., regularly for IV antibiotic treatments from a doctor who specializes in infectious diseases.

“I am not a drug addict,” Risden said.

Risden has a medical cannabis card for Michigan, where he travels regularly to use the cannabis that can help him get through the pain from his diseases.

For several years, Risden has owned a dog-training business called K9 Motivation, through which he trained law enforcement K9s from around the nation and Canada. The diseases and his medication leave him largely unable to work, instead leaving it in the hands of others.

“I don’t want to move to Michigan and leave my fiancée and my kennel manager and my dog training business,” he said. “My business is still running, but I can’t train. I haven’t worked in (several) months.”

Risden said the law enforcement community has supported him while he has tried to regain his health. But his stance on medical cannabis has left him less popular among those he used to work for.

“It’s heartbreaking that I can be denied medicine based off something people assume,” he said. “I got bit by a tick. I didn’t do anything wrong.”

“There are people who really need this stuff. They don’t want to just go smoke pot on the corner. That’s not how it’s going to be,” Risden said. 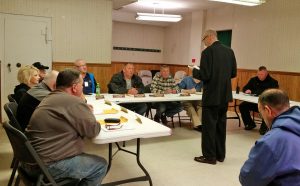 Tim Simpson, a Boyle County resident who is part of Secretary of State Alison Grimes’ marijuana task force, which supports of HB 166, addressed the council. He read the bill to the council after sharing some of his personal struggles with his battle with multiple sclerosis.

Tina Rudd, another Boyle County resident, spoke about how she believes medical cannabis can help with her pain as she battles cancer.

“I’m sick of being poisoned,” she said. “I don’t like how the medications make me feel.”

Simpson also shared how other agencies have responded — the resolution was supported by the Perryville City Council on March 1. It has also been signed onto by the Maysville City Commission, Bullitt County Fiscal Court, Lexington-Fayette Urban County Council and the Louisville-Metro Council. 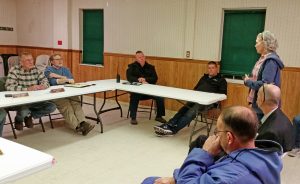 Simpson and a group of supporters failed to convince the Boyle County Fiscal Court to vote in favor of the resolution on Feb. 27.

Council member Kenny Baldwin, who formerly worked as a pediatric transporter for the University of Kentucky, spoke about why he supports cannabis as a medicine.

Baldwin said the last time they transported the child, the mother shared that they were going to be using medical cannabis drops. He saw a story later that child is now seizure-free.

All six council members voted in favor of supporting the resolution.

House Bill 166, an act relating to medical cannabis, is currently in the House Judiciary Committee, where it has been received and posted for consideration, according to the Legislative Record Online.