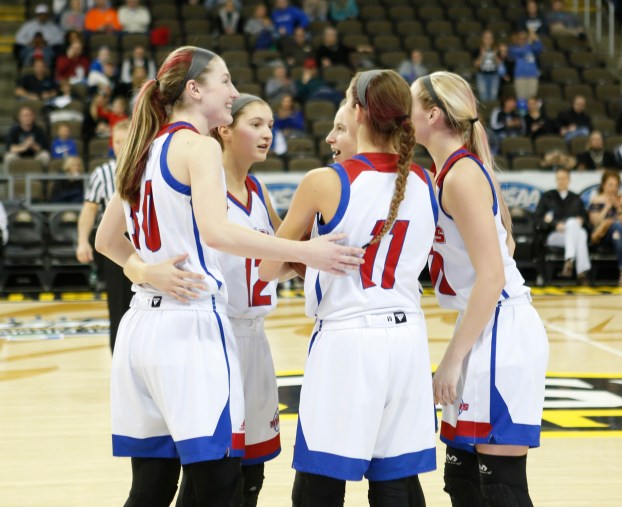 Mercer County cements legacy as one of the best teams ever

HIGHLAND HEIGHTS – Take a good, long look. You may never see the likes of this again.

A group of five girls who came together on the court as fourth-graders, who began dreaming championship dreams as eighth-graders, who won the first state championship for an area basketball team last year, took the floor together one last time to cement their legacy as the leaders of one of the best high school teams you will ever see.

They put a period on their collective careers with a dominating performance Sunday in the championship game of the Girls Sweet 16, smothering Mercy in a 74-34 victory that equaled the largest margin of victory in a title game.

“We were trying to win one, but coming back and going back to back, oh, my gosh, there’s no better feeling,” said Emmy Souder, one of the five senior starters who leave high school with two rings.

They will walk away with two state titles, four regional titles and a record of 180-34 in six varsity seasons. Those credentials are impressive enough, but coach Chris Souder said the fact that they did it all as a balanced team rather than as a squad led by one or two stars makes their achievements that much more special.

“We have to go down as one of the best teams of all time, to do what they’ve done. And they do it the right way, as a team,” coach Souder said. “These kids are the most selfless kids I’ve ever been around in my life. They love each other, they play for each other and they play for their community and their school.”

They may never have played better than they did Sunday at BB&T Arena, when they scored 20 straight points and held Mercy scoreless for more than eight minutes to open a 33-7 lead that left no doubt about a repeat.

“They absolutely may have saved their best career game for their last game,” coach Souder said. “I really didn’t expect this, but it doesn’t surprise me.”

Senior Seygan Robins, who repeated as the tournament’s most valuable player, said the Lady Titans were determined that nothing was going to stop them from going out on top.

“We were extremely focused, and we just knew that nobody was really going to get in our way if we were playing the way we can,” Robins said.

“I feel like when we won last night, we just knew,” senior Faith Lake added. “It’s just something that you can’t explain; you just know it’s going to happen. And then we just came out here and did what we did.”

“I could tell this morning when we woke up and talked about it,” senior Emma Davis said. “We haven’t had a good defensive game and offensive game put together in a while, so I knew it was going to be today. Coming out in warmups, I just felt everybody was ready to go.”

Chris Souder said he knew three or four minutes into the game that Mercy was no match for Mercer, and the players knew it, too.

“We got off to a really good start, and basically after the first quarter we just knew it was ours,” senior Lexy Lake said.

The players said the thrill of knowing in the second quarter that the championship was in their grasp was indescribable.

“There’s honestly no words to put it,” Davis said. “It is the best feeling I’ve ever possibly felt, and I don’t have any words.”

“There’s really no feeling like it,” Lexy Lake added. “I feel like it hasn’t totally set in yet, but I’m on cloud nine, that’s all I can say.”

The seniors didn’t play very much in the fourth quarter, but they returned to the floor for the final seconds and wrapped their arms around each other as time expired.

“There’s no words. It’s just incredible to end your season like that,” Faith Lake said.

The incredible story that ended in that embrace began when these seniors were fourth-graders, which is when they played together for the first time.

Their dreams began to take shape as eighth-graders, when they lost to Danville in the 12th Region final, then traveled to Bowling Green to watch the state tournament.

“We had just lost in the region, and we were like, ‘Wow, we just really want to be here one day,” Robins said.

“We just talked about how we have to get back to work and get better in every aspect of the game,” Davis added.

The dream grew as Mercer reached the state tournament in 2015, only to be badly beaten in the first round, then returned in 2016 and made it to the semifinals. But now that the Lady Titans have become the first team to win consecutive state championships since Lexington Catholic from 2005-07, they realize the reality is so much better than the dream.

“It’s just unreal,” Emmy Souder said. “Just to win it once is amazing, but to win it twice is unreal. We won our (middle school) state championship in seventh grade, and we thought that was cool, and just to get to this point is unreal.”

The way these girls finished their careers, with their arms around each other as the

HIGHLAND HEIGHTS — Emphatic. Mercer County left no doubt that it was the best girls’ basketball team in the state, defeating Mercy... read more