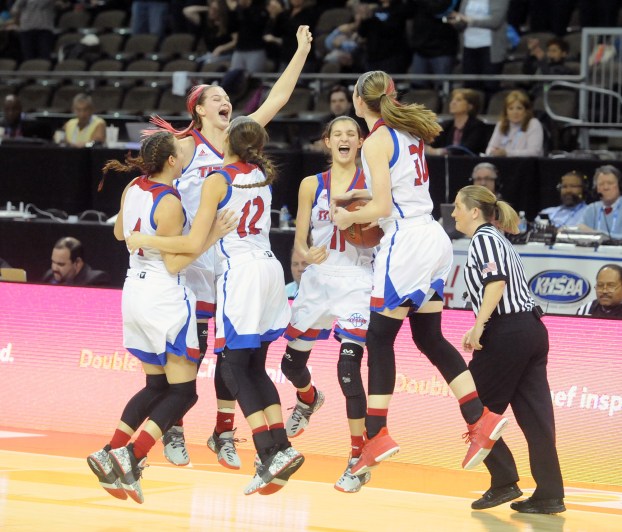 Mercer County left no doubt that it was the best girls’ basketball team in the state, defeating Mercy 74-34 in the state championship on Sunday at BB&T Arena.

That’s not the only record that was broken: Mercer County broke its own record for three-point field goals made in the state tournament with 16. The Titans had the record at 14, set last year against Boyd County.

As you can imagine, the drubbing started early: The Titans carried over their defensive intensity from Saturday’s semifinal win over George Rogers Clark, and put on an incredible offensive display. After one quarter, Mercer led 20-7.

“I think last night really helped us,” head coach Chris Souder said. “We didn’t score many points but our defense was insane. We just talked about, we tried to get them to relax and just worry about the game that you’re in. We told them, ‘happy ending, no matter what happens today.’ So go out there, you’re going to finish your career on this floor, you’ve been able to do that every year in high school. You finished it. Go back to back? Don’t worry about it. It’ll take care of itself. We could tell early that they were relaxed, back in the tunnel, they were having fun. Just them being them.”

The Titans would go on a 23-0 run in the middle of the first half and held a 52-14 lead at halftime, thanks to a 12-for-19 performance from three-point range.

Seygan Robins led the team with five assists at halftime, and Mercer finished the first half with more assists (15) than Mercy had points (14).

“We thought (Mercy) would maybe junk us some, chase Seygan, do some things like that,” coach Souder said. “So we were ready. But we also saw them sit in that 3-2 deal, so there’s going to be open looks. You guys move the ball, Seygan’s going to find you. We made some insane passes, Emma Davis made one, Toni McCombs made on that I didn’t even see open. Then Lexy, when she gets going, then Emma Davis. It gets contagious with these girls. They get confident, Emmy was able to hit three and pull (Danielle Feldkamp) out. We knew once we forced them to go man on us, we were in pretty good shape.”
The Jaguars went man and Mercer showed no mercy, on either end of the court.

“They rely on each other, they trust each other, I trust them,” coach Souder said. “They’ve been through the gauntlet, we finished 36-3 with the schedule that we played, it’s just incredible. Sacred Heart is the only in-state team that beat us. I thought Mercy was the hottest team coming in, they were definitely the hottest team in the tournament. So we were concerned about them. I’ll be honest, it was 52-14 at halftime, I thought it might be 52-48. A buddy of mine said he was ready for a great championship game, score in the 90s. I said it very well could be.”

A running clock went into effect as the second half started. In the state championship.

Coach Souder said the experience of last year’s victory played a huge part for his team.

“(Mercy) had a rough game last night, we were probably in bed before they got to the hotel,” he said. “I think they were a little leg-weary, too. And they’re young. So it gets taxing on you. I told them, ‘you’ve been here and they haven’t, so take advantage of it. That’s huge. You can’t put a price tag on the experience of being here.”

Mercer’s five seniors — Faith Lake, Lexy Lake, Seygan Robins, Emmy Souder and Emma Davis — all went on the court one final time in the last 30 seconds of the game. Each one touched the ball one final time, and they huddled together as the time expired and celebrated.

“There’s no doubt, this has to go down as one of the greatest teams of all time,” coach Souder said. “To do it the way we did it, I’m just proud of our kids, the way they conducted themselves off of the court. They’re all 4.0 students. They genuinely love each other and you can tell on the floor. They could care less who gets the credit. Just selfless players, and in this day and age it’s hard to get selfless players. There’s so much entitlement out there.

“I’m so proud, they come to work every day. Every day. Even after we won (last year), X is big on your back, the better we get the harder we work. We worked harder this year than we’ve ever had to work. They never wavered. We had some bumps, Sacred Heart put it on us pretty good. But they came back. It was probably the best thing to happen to us, it really woke us up.”

“My thing with Seygan, how is she not Miss Basketball? I know voting is done, but back-to-back state champions,” coach Souder said. “She’s barely the leading scorer on the team, but she leads us in so many other things. She’s the straw that stirs the drink for our team. She’s going to find you when you’re open, she’s not worried about points. She’s worried about winning. She’s just a winner and it rubs off.”

HIGHLAND HEIGHTS – For most teams, it would be a risky move at best to switch to a zone defense... read more