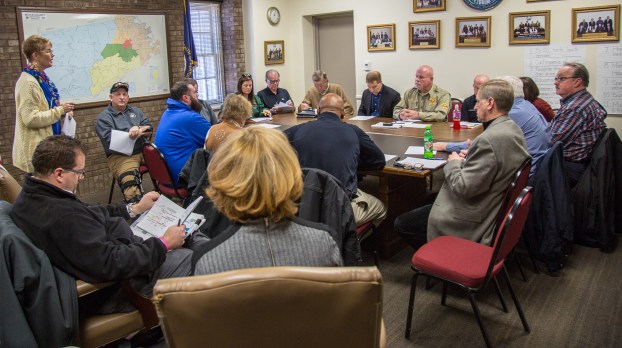 Officials working in the criminal justice system say they’re happy to see so much public involvement in efforts to address overcrowding at the Boyle County Detention Center. But based on recent public input meetings held in Boyle and Mercer counties, some say there are misperceptions about the jail and the court systems that need to be corrected.

“One thing I took away from the (Boyle County public input meeting) is that a lot of people don’t understand … how the system actually works throughout the court process,” said Lynne Dean, Boyle County attorney, during Friday’s meeting of the local Criminal Justice Coordinating Council — the newly formed group guiding development of a plan to make changes at the jail. 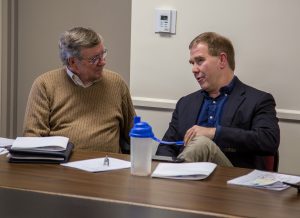 “I sat there (during the public input meeting) and thought, ‘OK, everybody has their own individual challenges and I don’t know that everyone can grasp what everyone’s challenges are,” Dean said. “I was really encouraged to hear overwhelmingly that people are interested in treatment.”

Dean said it’s not a simple choice to just offer offenders treatment for substance abuse or other problems instead of jail, and treatment is not an automatic money-saver: It costs lots of money to provide the staff for treatment to be truly effective.

And Dean said she noticed a specific perspective missing from the public meeting: victims.

“A lot of what I hear in my role is ‘lock ’em up’ and ‘why did they get out so soon?'” she said. “I deal with limited crowds in what I do. I’m usually talking to victims and people who are suffering consequences.”

Mercer County Sheriff Ernie Kelty said he also hears from victims a lot. He said he also thinks there should be more talk about how to prevent people from becoming inmates, rather than just how to rehabilitate existing inmates.

“I’m a tough-love dad. I had a 16-year-old spend six months in a military school … because I wanted to prevent him from becoming an inmate,” Kelty said. “And I think I have successfully done that — he’s 19 and he’s not an inmate.”

Commonwealth’s Attorney Richie Bottoms said as officials are looking into ways to fix the jail’s problems, he doesn’t hear enough about how victims feel about offenders being released from prison.

“We do need to be sympathetic to victim concerns — while we are trying to get people out of jail, which I’m for” he said. “Daily, if not multiple times daily, we’re explaining to victims why people are out of jail. And the purpose of this (effort) is obviously to try to get people out of jail. That’s just in my little world. … From my world, the more we can show sympathy and reasons why we’re doing things to these victims, the better receptive they will be to what we’re trying to do.”

Mercer County Attorney Ted Dean (no relation to Lynne Dean) said he was “somewhat pleased” with the turnout for the public input meetings, held last Monday and Tuesday.

“I was disheartened with a lot of the opinion that I heard that does not match up with the reality of what I see seven days a week, 24 hours a day — not just at my office but at home and on the weekend,” he said.

Ted Dean said there were “statistics that were flung around” at the Mercer County public input meeting that “have, from my review of things, no basis in reality.”

Attendees at the Mercer County public input meeting were critical of the number of people being held in the Boyle County Detention Center and several expressed opinions that many were in the jail for charges that didn’t warrant jail time, such as contempt of court or failure to pay fines.

“I don’t know if it’s a perception issue, I don’t know if it’s a lack of involvement with the system,” he said. “I was actually hoping that (jail consultant) Dr. (Allen) Beck would ask for final comments at the end of the Mercer County meeting because I would have said then as I say now, ‘Come sit with me before court. Look at the files I have. Look at the allegations; look at the criminal records. Look at the steps that we have taken to avoid incarceration, and give me your input then.”

Another opinion expressed at the Mercer County public input meeting was that local law enforcement is too “aggressive” in arresting individuals, adding to the inmate population unnecessarily.

Danville Police Chief Tony Gray said Friday he had been interviewed by Dr. Beck and told him the Danville Police Department is “not an aggressive agency.”

“I’m understaffed for what comes through this community on a daily basis,” he said. “… We’re the melting pot or whatever you want to say of these six or seven counties around us.”

Gray said he believes the judicial system in Boyle and Mercer isn’t big enough for the level of activity in the area — “we need more judges.”

Roger Fox, director of the Shepherd’s House Intensive Outpatient Program that helps released inmates with drug counseling, community service, job training and more, said he was in the same position as a lot of the inmates he now helps before he finally got his life together.

“I’m a treatment guy, but prison saved my life,” he said.

Fox said he thinks it’s vital to provide more mental health and treatment options for inmates while they’re in jail.

Fox noted it wasn’t his first trip to jail that caused him to turn things around “it was my 10th.” If there hadn’t been treatment options available inside the confines of the jail, “I’d be dead now.”

Fox said whatever solutions are found, he believes it’s imperative that Boyle and Mercer counties keep their local inmates here and give them local solutions. “Shipping” them off to other places like Lexington won’t help long-term.

“We’ve got to keep them here,” he said. “We’ve got to get them rehabilitated so they can help the next person.”

Boyle County Jailer Barry Harmon said he believes public support for improving the jail is “the most I’ve seen in almost 16 years” as jailer. For much of his time as jailer, it’s “just been the Joint Jail” Committee working on how to make the jail better.

To find the record of a “missing lot” Sarah Daniel starts the search on the public computer in the deed... read more