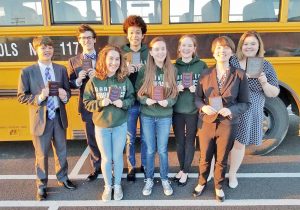 Danville High School qualified six entries and eight students to the Catholic Forensic League Grand National Speech Tournament to be held in Washington, DC, over Memorial Day weekend. Students earned their spots at Nats by placing in the top six in their respective events at the Louisville Diocese tournament (covering all of Kentucky) March 3. At the Kentucky qualifier held in Hodgenville, the team placed third overall behind Bethlehem and LaRue County with Murray and North Oldham fourth and fifth.  Senior Caroline Bugg led the team with a first place finish in Extemporaneous Speaking. Also advancing to DC are Katie Critchfield (Extemporaneous Speaking), Claire Strysick (Oratory), Emma Merryman (Oratory), and the Duo Interpretation teams of Haley Hopkins and Joseth Warner plus Barrett Minks and Britton Minks.

Additionally, DHS bus driver James Murphy was awarded the Ruth Blair Service Award for his twenty years of dedicated service to the DHS Forensics team. A nomination letter from Coach Steve Meadows was read at the awards ceremony, and Murphy received a plaque and a standing ovation from the assembled schools.

Three DHS students placed in the top ten in the John Edwards Pentathalon contest. The event requires students to compete in five categories including at least one of each of the three types of contest speaking (Original Speech, Limited Preparation, and Interpretation). Charlie Hall placed fourth, Claire Strysick sixth, and Caroline Bugg eighth in this overall event. 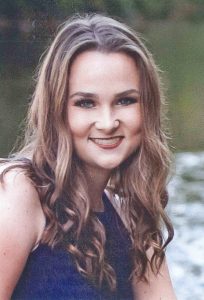 Because Sarah could not be present at the annual award presentation of the local chapter, her award will be presented at the Boyle County High School awards event by St. Asaph regent Nancy Kettelholn. Sarah’s entry was forwarded to the Kentucky Society Daughters of the American Revolution for judging.

Sarah plays girls’ soccer, is on the swim and dive teams and runs track and field. She is a member of the National Honor Society, Y-Club and Spanish club. She says she has “a passion for languages.”

She attends Sts. Peter and Paul Church where she is active in the youth group, is an altar server and cantor.

She is a Pioneer Playhouse volunteer as well as the Kentucky School for the Deaf summer camp dance instructor. She also volunteers at Grace Cafe and the Great American Brass Band Festival.

As a rising senior, she attended Governor’s School for the Arts in vocal music.

Sarah will attend college but is undecided at this time; however, she wants to study sports psychology. She says in her essay that following her interests “beats making more money any day. It is because of this that I can truly say I’m excited for what my life holds.”

Sarah is the daughter of Carole and Gregory Burns.

The new degree holders join more than 140,000 Eastern alumni in Kentucky and across the United States and world.

Eastern Kentucky University is a comprehensive university serving approximately 17,000 students on its Richmond campus, at its educational centers in Corbin, Danville, Manchester and Hazard, and throughout Kentucky.