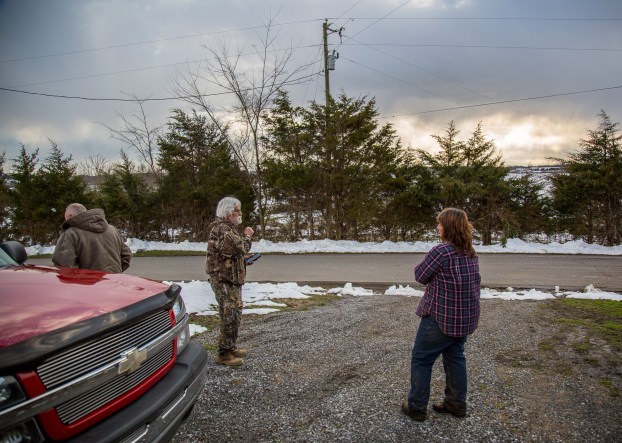 Whites Road resident Donna Slack, right, talks about an ongoing power outage with neighbors Tuesday evening, as they look at a utility pole where Slack said she believes a transformer blew, causing the outage. Whites Road was one of multiple areas in Boyle County still without power Tuesday evening, close to two days after a snow storm hit central Kentucky. (Photo by Ben Kleppinger)

Two days after a storm dumped more than half a foot of heavy, wet snow across central Kentucky, hundreds were still without power in Boyle County Tuesday.

More than 200 of Inter-County Energy’s 3,481 Boyle County customers were without power Tuesday afternoon; as of 7:45 p.m. power was still out to 188 customers, mostly at the far western end of the county, according to the utility company’s outage map.

It will likely take until Wednesday afternoon to get power fully restored to everyone, said Dan Hitchcock, vice president of member services for Inter-County.

Hitchcock said the winter storm that passed through Kentucky Sunday night into Monday morning hit Inter-County’s service region hard. On Monday, an additional 21 crews from other electric co-ops — on top of Inter-County’s own crews — were helping restore power to Inter-County Energy customers; on Tuesday, it was up to 25 outside crews, he said.

“Some of those co-ops didn’t sustain as much damage as we did,” Hitchcock said.

At peak outage, about 12,200 Inter-County Energy customers were without power following the storm, he said. By Tuesday evening, power had been restored to all but around 2,200 of them.

“The weight of the wet snow caused trees to sag and break, extra weight to be applied to the electric wires and poles, thus breaking those poles and tearing down the wires,” a news release states that was provided by Hitchcock Tuesday evening. “Roads in Boyle County that are without power at this time are Webster Road, Hayes Mayes Road, Whites Road, Springfield Road, Wilson Creek, Wards Branch, Mitchellsburg and Alum Springs Road, along with Alum Springs Crosspike and Chrisman Lane.”

Donna Slack is one of the residents on Whites Road, west of Perryville, who was still without power.

“This storm wasn’t that bad. I don’t understand what the big deal is,” Slack said. “I’ve got baby lambs in the house that need warm milk. I really thought it would be back on today.”

Slack and her neighbor, Pam Pendegrist, said they’ve waited a long time for power to be restored before: They waited two weeks for power after the massive 2009 ice storm, and weren’t happy about delays then, either.

Slack said she understands that the utility company needs to fix larger outages first, but feels Inter-County could do a better job preventing outages in the first place.

“We have a massive growing season. We have lots of trees, lots of vines,” she said. “… They need to focus their attention on either trimming the trees or burying the lines.”

Slack and Pendegrist said a retired lineman who lives in their area identified the problem with their particular outage — he believes it’s a blown transformer on a utility pole that would take a few minutes to fix once someone makes it to the scene.

Hitchcock said work has been slowed in Boyle County because so many of the reported outages were for single customers or small clusters of customers.

The outage map Tuesday night showed at least 14 individual outages and at least five outages affecting only two to 10 customers.

It takes time to get around to all of those smaller outages, Hitchcock said — and that’s slowed further if electric cables have to be re-run. Fixing larger outages is time-consuming as well — replacing a downed utility pole can take a crew two and a half to three hours, he said.

Hitchcock encouraged anyone without power to call Inter-County’s outage reporting number at (866) 224-2235 so the company knows about the problem.

“If they don’t report it, then we’re assuming they’re on,” he said.