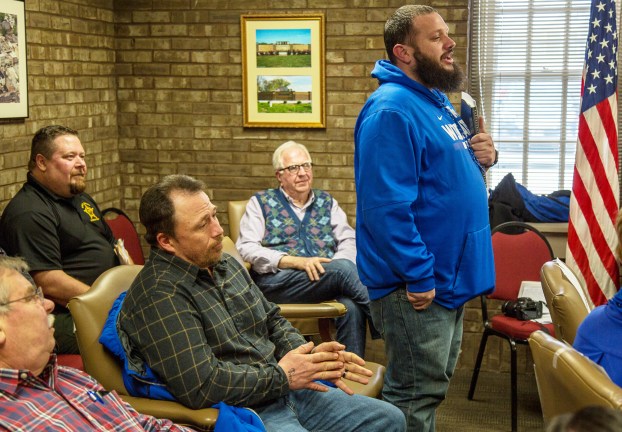 Roger Fox, standing, director of the Shepherd's House intensive outpatient treatment program for Boyle and Mercer inmates, introduces Daniel Short, seated third from right, a graduate of the program who successfully turned his life around, to members of the Joint Jail Committee Friday. (Photo by Ben Kleppinger)

That’s according to a year-in-review report provided by Roger Fox, director of the program, run by Shepherd’s House.

“We had a great year,” Fox told members of the Boyle-Mercer Joint Jail Committee Friday.

Among the statistics shared in Fox’s report:

• out of 90 admitted into the program, 24 are currently active clients, 23 have graduated and 43 were discharged (taken out of the program);

• 78 percent of program graduates have remained sober and not reoffended; and

• program participants took 999 drug screens and passed 88 percent of them.

Inmates in the jail can volunteer and then qualify to participate in the program, which provides job training, substance addiction counseling, community service time and connections to local support networks, among other things. Prosecutors and judges must agree to let inmates be released while they participate in the program; if they fail drug screens too often, reoffend or otherwise don’t participate in the Shepherd’s House program appropriately, they can be sent back to jail.

Shepherd’s House estimates it’s prevented the counties from needing to provide 10,594 inmate days at the jail, based on the savings estimate of $201,286.

Fox brought a real-world example of the statistics he presented with him to Friday’s Joint Jail Committee meeting: Daniel Short, a former inmate who went through the program.

“I just wanted you all to see what you’re really paying for,” Fox said. “He had a district court case and a family court case going on. We didn’t know if he was going to get his kids back. It really wasn’t looking too good. He’d had a lot of opportunities and he kind of messed them up.

“He stayed sober through our program. His mother died and he stayed sober through that. He really dug in and did the deal. He got a job at Centre College … he got an apartment, he got a car, and in April, they’re going to begin reunification of his family and he’s going to get his kids back. And that’s what we’re paying for.” 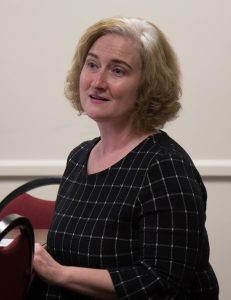 Boyle County Attorney Lynne Dean says she is proud of Daniel Short’s accomplishments through the Shepherd’s House treatment program. She previously prosecuted Short, but he now has a job and is successfully remaining sober. (Photo by Ben Kleppinger)

Boyle County Attorney Lynne Dean said she was the one who prosecuted Short when he was coming through the criminal justice system.

“It is very nice to see him here today,” she said. “… I’m tremendously proud of you. I thought that you were going to die. I was that concerned about you. I am so proud of your accomplishments, and thank you for doing what you need to do. And I know your family thanks you as well.”

Fox said Short is “one, and we feel like we have many more” who have been helped by the program.

“Another guy … just graduated the program on Wednesday. I promise you, when I sat in court — I know his family, I thought, ‘he’s not going to show up the first day,'” Fox said. “He graduated on Wednesday. He proved me wrong. … It’s a really good feeling. And we’re ready, we’re excited about the first year, but we’re ready for the second year — we think it’s going to be even better.”

Currently, the Shepherd’s House program has 24 participants; Boyle and Mercer have struggled to fill the program to its maximum capacity of 60.

Later in Friday’s Joint Jail meeting, during discussions over a preliminary 2018-19 budget, Boyle County Treasurer Mary Conley suggested the counties could look into letting other counties access seats in the program for a charge.

“I know there’s some differing views about that — that we need to save them all for our people — but if we’re not keeping that many people, on down the road, we need to consider selling that space and rehabbing people who are around us,” she said.

“They’re all coming over here anyway,” said Brian Wofford, chief deputy at the jail. “Most of the rest are from the surrounding counties. We’re a hub.”

Conley said, “I know we want to take care of ourselves, but we’re all in the commonwealth and they all come and work at our businesses.”

A Children’s Place closing at end of May

On Friday, Ephraim McDowell Health (EMH) announced it is closing its A Children’s Place (ACP) daycare center on May 31,... read more