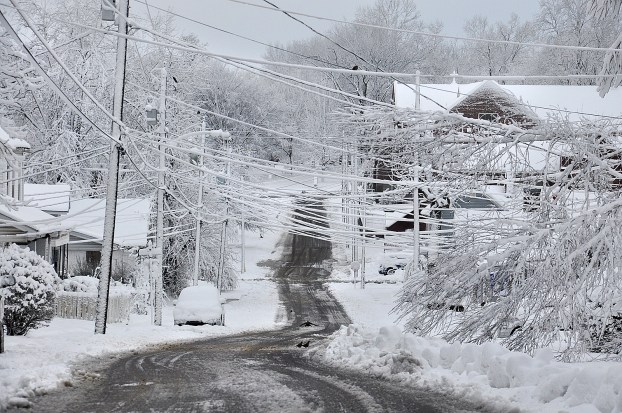 Thousands were without power in Boyle County beginning Monday morning and throughout the day due to a substantial snowfall that blanketed the area overnight.

Screenshot from the website of Kentucky Utilities from about noon, shows the areas of the region that were experiencing outages for KU customers on Monday.

“It was a wet, heavy snow that was able to get on tree limbs, knock those into lines and pull wires down,” said Daniel Lowry, spokesperson for Kentucky Utilities.

A screenshot of the outage map, available on the website of Inter-County Energy, shows the customers experiencing outages at about noon Monday.

The heavy snow was also to blame for some communication problems between emergency responders and the Danville 911 Dispatch Center.

“One of the repeaters quit working,” said Mike Wilder, Danville-Boyle County Emergency Management director. “There’s not a lot you can do when the heavy snow gets on those things.”

Being down a repeater meant that there were times when responders couldn’t hear the calls. Wilder said the signals were quickly rerouted and sent to other towers that were working.

Altogether, Wilder said about 8 inches of snow fell overnight; prior to the snow storm, he said, the county had only seen about eight inches total all winter.

He was out at about 3:30 a.m. with others, responding to people getting stuck along the sides of the road.

“There were no injury wrecks that I’m aware of,” he said.

Some roads, he said, were closed due to downed trees or power lines.

Wilder said things were expected to be melting off over the next few days, but it might take a little longer than normal for the snow to disappear completely. It could be slick in the mornings, after the snow has melted during the day and re-frozen during the night, he added.

Monday was the seventh day students were not in school in Boyle County Schools this school year, marking four snow days, one sick day and two non-traditional instruction days, when students worked from home. NTI days are not required to be made up.

Boyle County Superintendent Mike LaFavers said it was too early to know what impact missing Monday would have on the calendar, which would have to be decided by the district’s board of education.

It was the sixth day for students in the Danville Independent School District to not be in school, marking five snow days and one sick day.

Officials working in the criminal justice system say they’re happy to see so much public involvement in efforts to address... read more