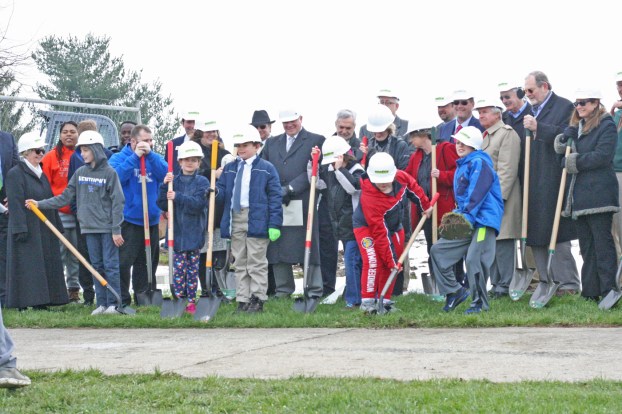 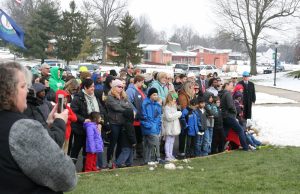 Kendra Peek/kendra.peek@amnews.com
Students and community members gather to watch the groundbreaking of the new elementary school on Tuesday.

On Tuesday, students, staff and alumni of Kentucky School for the Deaf gathered at the future site of a new elementary school that has not yet been named for an official groundbreaking.

“We’re going to come back and have a big unveiling for the name of the building,” said Commissioner of Education Stephen Pruitt.

Students were visibly excited at the idea. He said names had been submitted but nothing had been decided.

“We’re going to do everything we can to support (students) and give them the best educational experience that we can,” Pruitt said.

It’s the first time a new structure has been built on the campus in about 30 years. The 16,500 square foot facility will replace Walker Hall, which was built in the early 1970s and closed two years ago.

A rendering from the Kentucky Department of Education shows the plan for the new elementary school at the Kentucky School for the Deaf, anticipated to be complete by December.

The facility is expected to be completed in December, in time for students to move into when the January classes open. 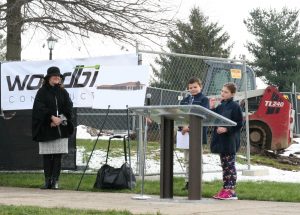 Kendra Peek/kendra.peek@amnews.com
Kentucky School for the Deaf Principal Toyah Robey, left, stands by as third grade students Mathew Colbert, center, and Jazmine Webb, right, share how excited they are for the new building.

Students Jazmine Webb and Mathew Colbert addressed the audience, expressing their excitement about the new facility.

Colbert said he is “so ready” to have their new elementary school.

“We’ll be able to have our own school, our own eating area, our own meeting areas and even our own dorm,” he said. “We won’t have to walk a long way across campus to get to where we want to go.”

Presently, the elementary students have to walk from Kerr Hall, where they have classes, to the campus cafeteria. The new facility will have a small kitchen and a multipurpose area, along with 10 classrooms, rooms for instructional support and dorm rooms for 20 students.

Jazmine said, “I think the new school is going to look awesome. I think it’s going to be beautiful.” 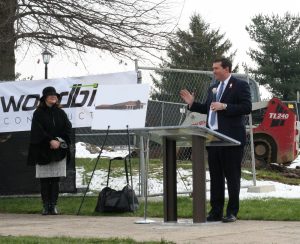 Kendra Peek/kendra.peek@amnews.com
Commissioner of Education Stephen Pruitt speaks during the groundbreaking of the the new elementary school at the Kentucky School for the Deaf.

The building, he said, will have room to grow. KSD can’t receive funding in the way local school districts do, through local property taxes and by qualifying for School Facilities Construction Commission funding. Instead, funding for the building comes from the general fund; $6 million was set aside for the new building in the state’s last biannual budget.

Walter “T” Hulett, a state supervisor who was interim superintendent of the school for a few years, was also recognized as a driving force behind the project. Hulett said work was being done to upgrade the infrastructure of the whole campus to benefit students. 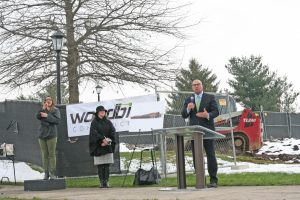 He said the new building is LEED certified, which stands for Leadership in Energy and Environmental Design, and relates to energy efficiency. Hulett said this is important because it means that “we are maximizing our dollars for educating our kids, not paying utilities.”

Robey said she is looking forward to the opening of the facility, which has been a vision for a long time.

She called the staff of KSD “rock stars,” and said everything they do is “for the kids.”

“We are here today because it’s for the kids,” Robey said.

To see more photos from the event, visit the gallery.

Many of the smaller community agencies asking for funding from the City of Danville next fiscal year may not have... read more