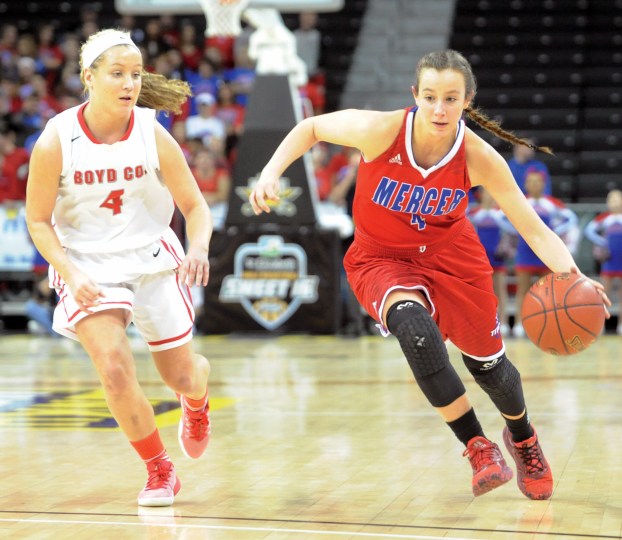 LEXINGTON — Seygan Robins has had a good week.

The Mercer County senior led her team to back-to-back state championships on Sunday, again winning MVP honors along the way. On Tuesday, she won Miss Basketball.

Robins wasn’t the highest scorer of the candidates for the award, but her head coach Chris Souder said it’s everything she does on and off the court that makes her the perfect Miss Basketball award winner.

“What a way to cap your career,” he said. “I don’t know what else she could’ve done as a player. She’s just one of those servant leaders that you dream for as a coach. Selfless player. It just proves that hard work, dedication and love of the game can pay off. She’s got some talent too, but she’s got all the intangibles and is just a special player. The best way to describe her is a servant leader.”

Robins has scored more than 2,500 points in her career and will play basketball at the University of Louisville next year.

Mercer boys’ coach Josh Hamlin was an assistant on the girls’ basketball team last year. He coached Mr. Basketball winner Trevon Faulkner this season as the Titans’ boys coach, and said the pair are unlike anyone he’ll ever coach.

“I don’t know if I’ll ever be able to coach a Trevon or Seygan again,” he said. “To be able to coach both of them, It’s something that is extremely special. I’m happy for them, they both deserve it and they’re both going to have great careers.”

Faulkner and Robins swept for the Titans — the first time ever a single school has won both awards.

“We both worked really hard, I’m proud of him,” Robins said. “We have a lot of people here from Mercer, I know my team is really supportive of me as I’m sure they are of him. It’s just really great to have such a strong community behind us.”

Souder said that Robins might have thought about the award during the season — she was dubbed a favorite after winning the state tournament MVP last season — but it never showed in the way she played.

“Seygan is so humble, you wouldn’t know it if she was thinking about it,” Souder said. “I’m sure, she’s a kid, it’s normal, everyone’s talking about it. But you’d never know it with her. That’s just one of the qualities that she has, she’s just a humble kid.”

LEXINGTON — For the people that coached Trevon Faulkner, there was no doubt. Faulkner was named Mr. Basketball on Tuesday in... read more