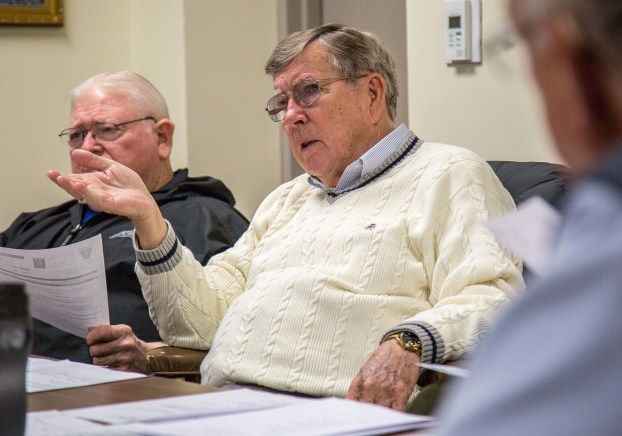 Boyle County Magistrate Jack Hendricks said Tuesday the county must pay additional costs to complete installation of a new fire alarm system in the government services center because it is a public safety issue. (Photo by Ben Kleppinger)

The Boyle County Fiscal Court has continued its declaration of an emergency concerning the fire alarm system that serves its government services center, including the Boyle County Detention Center.

The emergency declaration was needed in January so the court could hire Vulcan Fire Systems Inc. to replace the government services center’s malfunctioning fire alarm system at an estimated cost of about $36,000. The emergency was continued this week so that the court could pay Vulcan an additional approximately $22,000 to fix another, previously undiscovered issue with the alarm system.

Jonathan Edwards, the lead on the project for Vulcan, told magistrates the building’s new control panel, all the detectors and pull stations are now functional. But only some of the “enunciators” — alarms and lights that sound and flash when smoke or fire is detected — will work because the existing wiring cannot provide adequate power.

“When we hooked the horns and the strobes up, we got a dead short on our circuit. So, nothing we could do except start pulling devices, find out what the issue is,” he said. “As soon as we pulled the first device, it was a nightmare.”

The original system’s enunciators were wired by an electrician, not a fire alarm expert; the devices are wired with a cord that looks like a “lamp cord” that has 16 red wires inside it, none of which are marked, Edwards said. Despite that problem, Vulcan decided to “eat the cost” of replacing the enunciators and put in hours of work tracing the power lines so the devices could be hooked up, he said.

The enunciators are now all hooked up, but because of the polarity problem, only devices in the middle of the chain can get enough power to sound the alarm — devices near the beginning and the end of the chain won’t alert people if there’s a fire, he said.

If a detector or pull station sets off the alarm, “you won’t be hearing noise all the way throughout that entire complex,” Edwards said. “You will hear spotty noise here and spotty noise there as we can power some devices, but it’s not going to ring everything. So 100-percent up to code? No.”

For around $22,000, Vulcan will tear out all the existing wiring and replace it with color-coded, direct-polarity wiring in the jail, EMS, public works and recycling facilities contained in the government services center, Edwards said. 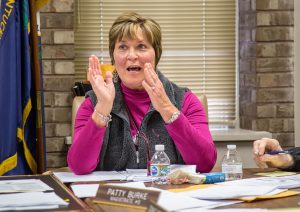 Boyle County Magistrate Patty Burke questions why the fiscal court was being asked for an additional $22,000 by Vulcan Fire Systems Inc. during Tuesday’s fiscal court meeting. (Photo by Ben Kleppinger)

Members of the fiscal court weren’t happy about the increased cost.

“I’m a little confused because I thought we had a bid to replace this whole system,” Magistrate Phil Sammons said.

“I’m a little lost here and I’m admittedly not an electrician, so you’ll have to walk me through it,” he said.

Edwards said the approximately $36,000 price that Vulcan originally offered to Boyle County was “minus enunciators” because Vulcan believed it could probably reuse the existing devices and wiring.

“The original bid was pushing close to $58,000, $60,000” to replace everything, including the enunciators and their wiring, he said. “I believe the decision was made after a discussion that we didn’t feel like the court would approve such. And at that time, we were under the impression that the devices would work. Until we physically got into understanding that it was a reverse-polarity panel — we were blind-sided, and then once we found that out, there was nothing we could do.”

Magistrates questioned Edwards at length as to why Vulcan offered the lower price when it had discussed the higher price internally. Edwards and another Vulcan representative maintained they believed the new system would work with the old enunciators and wanted to provide the lowest price possible that would result in a functioning system.

Magistrate Jack Hendricks eventually said despite the fiscal court’s complaints and concerns, he saw no way around paying Vulcan to finish the job.

“Let’s face it folks, we would not have had a choice — we would have had to do it anyway (if Vulcan offered the higher price first),” Hendricks said. “It’s a safety issue in the jail. We don’t have a choice here in my book. It’s still an emergency, it’s still not working. I don’t particularly like the way it turned out, but it’s still not working and that’s the bottom line — it’s a safety issue for the people out there.”

Boyle County Treasurer Mary Conley said the total cost of the project will be split among the entities using the government services center, with the Boyle County Detention Center shouldering the largest portion at an estimated $41,000 of the $58,000 cost. Boyle County expects to use funds from the jail’s savings account to cover the jail’s share. 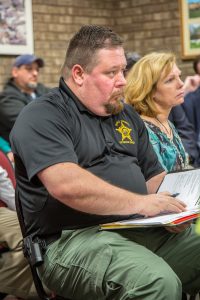 While the alarm system is not yet back online, the jail must continue running “fire watch patrols” 24/7. Someone must check every room in the jail every 30 minutes for signs of smoke or fire.

Jail Captain Chad Holderman said Tuesday three of the four people hired as temporary workers to conduct fire watch patrols have since quit, so regular jail staff are having to work additional hours conducting the patrols themselves.

Asked how much longer it will take to finish the work, Edwards said, “I’m going to need some more time — I ain’t going to lie to you.”

It will take at least 160 hours of work to complete the job, he said.

Parents concerned about the closure of Ephraim McDowell Health’s day care facility, A Children’s Place, planned for late May, were... read more