The walkout was scheduled for 10 a.m. across the nation’s time zones, but DHS was on a two-hour delay because of hazardous driving conditions, so the walkout took place at 1 p.m. But like all other walkouts across the country, the event lasted 17 minutes, representing each person who was killed in the shooting one month ago at Florida’s Marjory Stoneman Douglas High School. 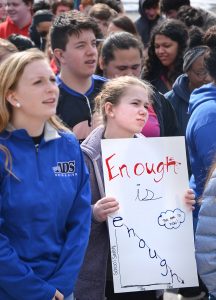 In an announcement to the student body before the walkout began, DHS Principal Haley Ralston said, “At Danville High School, we have always placed a high value on student voice. When it comes to school safety, we feel it is especially important for you to provide input. For that reason, DHS allowed students to participate” in the walkout which was organized by the school’s Junior Statesmen Association.

On the crisp, sunny afternoon, several parents and other community members gathered on the sidewalk in front of the school to show their support for the students and more school safety.

When the walkout was called, students quietly swelled out of classrooms and down hallways heading toward the front steps of DHS where the rally was being held.

Some held signs reading “Am I Next…,” “Who will be next?” and “Fear has no place in schools.”

A mom in the crowd waved a sign that read, “No More.”

The first speaker, DHS junior Katie Critchfield and JSA president said, “Today we reflect on issues that have demanded students’ attention over recent years … As students, it is our responsibility to stay informed and keep an open mind.”

Sadie Price, an 11th-grader and JSA Director of Debate said, “At this moment, we are no longer just teenagers and high-schoolers, but activists, protesters and believers in a cause that has left many in our generation as victims of violence.”

Price added, “Some people out there say that teenagers will forget about this issue and focus on prom and gossip … But doesn’t today show that we care? That we will not have our voices be turned away just because of our age? But have our voices heard because we want change and are willing to stand together?” 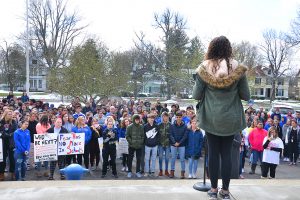 Caroline Bugg, a senior and JSA VP, said, “If we, as a school, continue to work on being united, we will flourish as a community. If we make connections with our peers, we’ll be better able to look forward for signals that someone could be going in the wrong direction. Looking out for one another, making friends with one another, and being unified will help us have a safer school environment.”

Senior Corbyn Denson stepped up to the microphone and read names of the 17 victims who were killed in the Parkland shooting and two names of the victims at the Marshall County shooting, along with a short description of each person. Heads were bowed and a silence prevailed over the crowd. Occasionally a slight laugh broke out as personal aspects of each victim was read “…self-proclaimed lover of chicken nuggets … a ‘perfectionist’ who loved red lipstick and teal-colored bags …”

But then there were descriptions such as “… a sweet and caring young man who was loved by all who knew him … a girl whose favorite quote was ‘I love nothing more than my grandma and her smile.'”

Once 19 students stood together Denson said, “These people symbolize the 17 victims from Stoneman Douglas High School and the two victims from Marshall County High School. Now for the rest of you, imagine these 19 people are gone from the world forever. The purpose of this walkout is to ensure that something like this never happens again … I may be young, and I may be inexperienced, but I know that the people responsible for these attacks never intended to create a spark within the youth of America that would set the world on fire. So let this event be the inspiration that you need to work together with your peers, step forward, and take action toward a cause that we can all believe in!”

The Boyle County Sheriff’s Office has been authorized to purchase new “P25” radios at a cost of about $24,000, allowing... read more