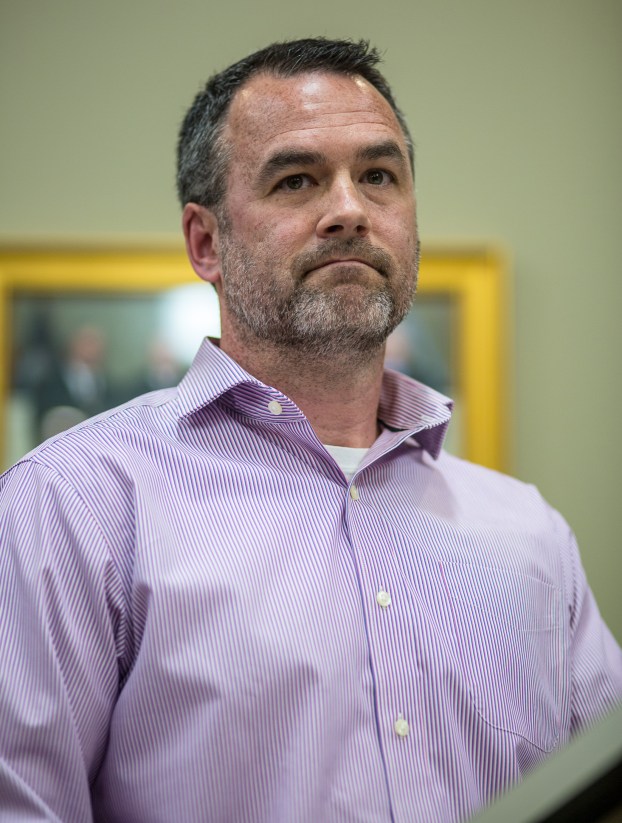 Housing Authority of Danville Executive Director Tim Kitts speaks to the Danville City Commission Monday about creating an "EnVision Center" where numerous low-income services could be available in one physical location. (Photo by Ben Kleppinger)

The Housing Authority of Danville is investigating the creation of an “EnVision Center” in the city, which would unite many services for low-income people under one roof.
“In Boyle County, there are a lot of services that are provided … but they’re scattered throughout Boyle County,” said Tim Kitts, executive director of the housing authority. “I’d like to see us as a housing agency partner with those folks that are doing it already and bring those to one central location.”
The creation of EnVision centers is a new initiative from the U.S. Department of Housing and Urban Development, Kitts said. The initiative aims to “provide communities with a centralized hub for support in … economic empowerment, educational advancement, health and wellness, and character and leadership,” according to a letter written by Kitts.
“We are looking to see more residents become self-sufficient,” Kitts said. “That’s been my goal since day one and so this program helps jump-start that.”
“EnVision centers will leverage public and private resources for the benefit of individuals and families living in HUD-assisted housing,” Kitts’ letter reads. “HUD anticipates that positive outcomes for individuals and households will generate additional positive impacts at the community-wide level. EnVision centers will also break down the silos of government.” 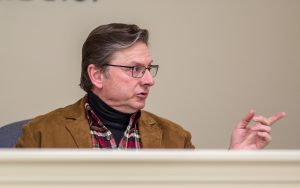 Danville Mayor Mike Perros participates in Monday’s city commission meeting. Perros asked for assurance from City Attorney Stephen Dexter that the city wouldn’t commit itself financially by support a proposal from the Housing Authority of Danville to create an “EnVision Center.” (Photo by Ben Kleppinger)

Danville City Commission approved Monday authorizing Mayor Mike Perros to sign a letter stating the city’s support for the EnVision Center plan. Kitts told commissioners a location for the potential center has not yet been determined.
Kitts said the EnVision initiative is the Trump administration’s effort to “put their money where their mouth is” when it comes to helping people become more self-sufficient, rather than relying on government assistance. HUD plans to fund the EnVision project; the City of Danville is not expected to commit any funds, he said.
“The exciting part is that these things already exist in Danville-Boyle County,” City Commissioner J.H. Atkins said. “This is an attempt by the housing authority to make all of those things available to their customers, grouped in a centralized place, but also probably at very little additional cost to the community itself. Very little cost if any.”
City Commissioner Kevin Caudill said the initiative seems similar to the 211 phone service that helps people find assistance programs.
Kitts said while 211 pointed people “in the right direction” to find services, the services themselves are still “scattered around the county,” making it harder to use them and harder for different groups and services to work together.
Perros asked for additional reassurance prior to the city giving its support that there was no monetary requirement being placed on Danville.
“I’ve got to put my cautious hat on here, because when you use the term ‘commitment,’ that’s kind of a serious, solidifying term,” he said, referring to the letter Kitts asked the city to sign on to. “I’m not sure if there is an obligation behind that or not.”
Danville City Attorney Stephen Dexter said it’s clear there is no commitment of funds through the letter of support.
“Obviously, if there were any funding strings attached, that would have to be a different request,” Dexter said.
You Might Like

Preschool, kindergarten and first grade students in the Danville Independent Schools will be housed at Jennie Rogers Elementary School for... read more