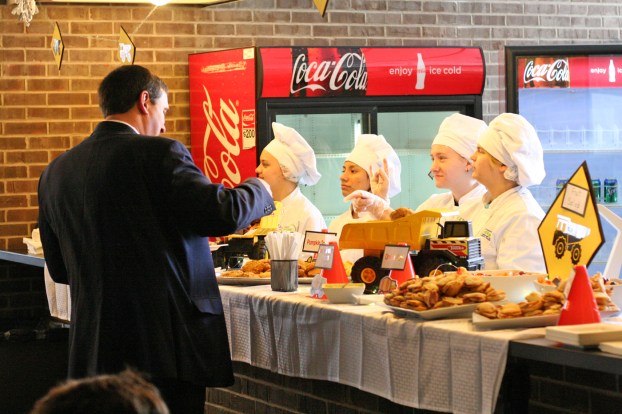 Commissioner of Education Stephen Pruitt speaks to Layne Adkins, Sulmi Gomez, Sarah Joiner and Benny Shirley, members of the DefChefs team at the Kentucky School for the Deaf during the groundbreaking of the new elementary school. (Kendra Peek/kendra.peek@amnews.com photo)

Their award-winning meal included handmade fettuccine with a mornay sauce and airline chicken, which is a chicken breast with the wing attached, and an espresso cannoli for dessert.

“We had to decorate the desserts once we had them made,” said Warmack, explaining that they drizzled chocolate sauce over the cannoli.

The students settled on what to cook together, based on the theme “Italiano.” 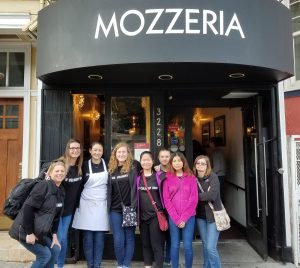 Byrne explained that the students tried a variety of cannoli flavors in the weeks leading up to the competition.

“They made a lot of cannolis,” she said. “They were constantly tasting and changing their recipes until they got something they believed would work.”

She said the students pushed her to the limit for the competition. “They always wanted more practice,” Byrne said.

Initially, she said, she planned one practice a week, but, for the students, that was not enough.

“There was some talk of me coming in on Sunday nights, too. I just couldn’t do that,” Byrne said. “We settled on three days a week. They would come in after school and stay until dinner. Then, they would come back after dinner and stay for another hour.”

She said the recipes changed, too, including the airline chicken rub made by Shirley, and the mornay sauce created by Joiner — who made sure he had “just the right recipe,” Byrne said.

“They all really worked hard on developing their recipe and making sure they had a product they really were proud of. They’re very critical, in a good way,” Byrne said.

“We said we weren’t going to stress about it, we were going to keep our cool,” said Warmack. 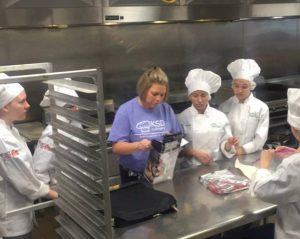 Kentucky School for the Deaf teacher Mandy Byrne gives her students on the Def Chefs team a pep talk before they competed in the Deaf Culinary Bowl on March 9. The team brought home second place. (Photo contributed)

Byrne said, “It put them in a challenging situation where they had to adjust to that and they did a beautiful job.”

The event was held on the campus of the Culinary Institute of San Francisco. Students were given money to shop for their own food supplies, and they competed against seven other schools.

They also participated in culinary workshops and got to visit Mozzeria, a deaf-owned and operated restaurant in San Francisco.

While most of the students say they want to study other things after high school, for Collins, a junior, the event was perfect — she wants to become a chef, possibly opening up her own restaurant someday.

“This is what I want to do when I graduate,” she said.

Collins said she has always enjoyed cooking and grew up watching her family cook.

Joiner, a junior, said she hated cooking before taking Byrne’s culinary classes. But she took the first class, enjoyed it and decided to try out for the team.

Shirley, a sophomore, said cooking is good because “it feeds other people. It’s a win-win situation.” Someday, Shirley hopes to use cooking to help others, but isn’t sure what the future holds career-wise.

Warmack, the only senior, joined as a sophomore.

“I was awkward in the kitchen, but as time went on, I got better. I like to help and teach other students … now I’m working on my skills,” she said.

Gomez, a junior, said she joined because she wanted to learn how to cook new things. She enjoys the class and the team.

“I like to try different recipes. It’s good,” Gomez said.

Adkins, a sophomore said she joined last year, too. 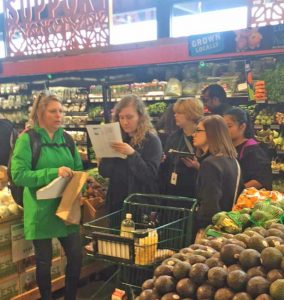 KSD teacher Mandy Byrnes with her Def Chef students in Whole Foods, where they shopped for supplies for the competition over the weekend. (Photo contributed)

“I like to try new foods, flavors,” she said. “Also how to improve things and make them better.”

Byrne explained that some of the students were concerned about the security at the airports, because of their cochlear implants. But, the walk-through check points are X-ray machines, not magnetic, so there were no issues.

For Joiner and Collins, this was their first time flying. Joiner said she was a little scared, while Collins said she was excited, but a little nervous.

But all of the students said they had fun on the trip.

Warmack called the trip a neat experience. She said she plans to get on a cooking team in college to compete, too.

Joiner said she was interested in looking at Ohlone College, which they got to visit on the trip. The college has an agreement with Gallaudet University, which is for students who are deaf or hard of hearing, said Byrne, to accept credits of students who attend Ohlone. Joiner said she hopes to visit Gallaudet while she studies at KSD.

While on the trip, Byrne said students were told by judges and by some of the others they met that they could easily get careers working for companies such as Google in the food service industry.

“It was my first time in a big city,” Shirley said. The graffiti was fascinating, she said, as well as the large population of homeless individuals.

Shirley hopes to move somewhere similar, in order to volunteer to work with the homeless.

Competing against other deaf students was different than competing against hearing students, Collins said. She, Gomez and Adkins were part of the team last year when they competed against students from Boyle County and Casey County in the Junior Chef competition. The KSD students won, taking them on to the state level. They were able to cook at the Kentucky State Fair, too.

Adkins said she was still nervous competing against the other deaf students, but Collins said it made her less nervous.

“I felt way more confident. I think if we keep doing competitions, I will be confident no matter what,” she said.

She’s vying for the team to participate in Junior Chef again, then in a competition in Disney World and in another deaf competition in Las Vegas next year.

Byrne said, “They’ve got their sights on some pretty ambitious things.”

Smiling, Collins said, “I want to do every single one of them. I want as much experience as I can get.”

Byrne said, “It was funny … they won the second place award and it wasn’t two minutes later they said, ‘That’s good, but next year, we want first.’”

The Kentucky School for the Deaf’s Def Chefs can be hired to cater events. Contact Mandy Byrne via email at mandy.byrne@ksd.kyschools.us.

Many Danville High School students participated in the #Enough! National School Walkout on Wednesday. The walkout was scheduled for 10... read more