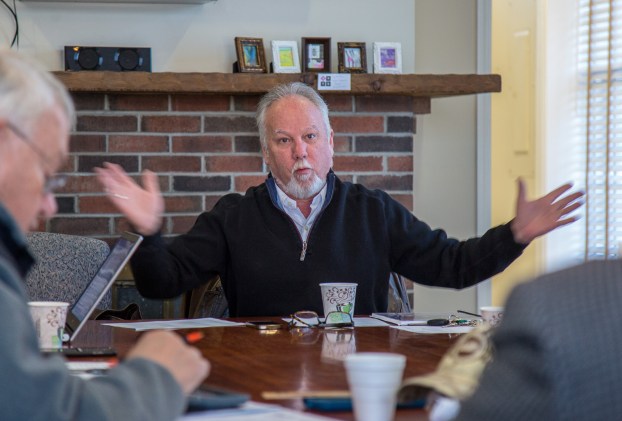 The Danville Independent School District is currently “in a bit of turmoil,” Danville Mayor Mike Perros said during this week’s meeting of the Danville-Boyle County Economic Development Partnership’s Executive Committee. Perros wondered if there was some way for the EDP to be supportive of the school district, since it is a “vital component” in attracting quality employers.

“There’s some real underlying issues” with the school district, Perros said during his off-the-cuff comments toward the end of the committee meeting. “And I think they have a lot of implications to undercurrents in this community that need to go away.”

“Like what? What do you mean?” EDP Chair Ben Nelson asked.

“I’ll give you two or three. The elephant in the room on this is the racial issue. The other issue seems to be that there are the haves vs. the have-nots,” Perros said. “I’m not saying that any of this is valid, I’m saying this perception seems to be coming up in different areas and usually where there’s smoke, there’s fire.

“It just makes you scratch your head and say — at some point, parents are going to say, ‘enough, we’re going to move our child.'”

Perros said he doesn’t know that the EDP can do anything other than “put it out there and bat it around” and see if it leads to any solutions.

Perros didn’t specifically mention what issues at the school district he was referencing. The flow of the conversation seemed to indicate the committee members understood the main issue to be fallout over the recent decision by the school board not to renew Superintendent Keith Look’s contract, meaning Look is slated to leave June 30 and the district is now seeking a new superintendent.

Asked after the meeting about his comment on there being a “racial” problem, Perros said race has “been used as a negative against the Danville Schools, vs. what should be a positive in terms of diversity.”

After Perros’ initial comments, Nelson suggested trying to solve any problems the school district may have would fall outside the EDP’s wheelhouse.

“… That’s kind of how I would react to what’s going on in the Danville School District. I think we’re interdependent, and I think we want to say, ‘How can we help?'”

“Absolutely, that’s why I put it out there,” Perros said. “I have no illusions that we can do anything except listen, be aware and make ourselves available to help.”

Nelson held up his copy of the EDP’s strategic, long-term plan.

“There’s a boatload of stuff in this plan that we’re not moving down the road (on) as aggressively as I would like,” he said. “And every time we add other stuff … I’m OK with us changing and adapting, but I worry about creep. Creep’s not a good word. We can get worried about and working on so many things, we don’t do anything well.

“But I agree with you that what’s going on in the Danville School District is concerning.”

Ennis Tillman, an at-large member of the EDP board who attended the Executive Committee meeting, said he doesn’t want to see families moving into the area for a job or another reason choosing to live outside the Danville School District.

Nelson said there are some people who believe that many problems would be solved if the Danville and Boyle school districts would merge; Tillman raised his hand, indicating he supported that idea.

Later in the conversation, Perros suggested the EDP could “have a debrief” with Look and ask him “what is going on? What is your perspective? And what — if anything — you think we as a collective group might be able to do?”

“There’s going to be legal challenges to whatever some people feel like was done incorrectly. That has to go through the (courts), which leaves us out of it,” Albright said.

The “second part” is “this fall, the elections,” he said. “… I think historically we kind of stay out of the political arena.”

Marty Gibson, another member of the EDP Executive Committee, said “if we’re going to give any focus at all to this,” he thinks the EDP should “Stick to our core missions here.”

By doing that, the EDP can support the school district, however things may play out, he said.

“We’ve kind of got to move on to a certain degree.”

“Even with the turmoil and the comments that are out there … I’m convinced we will continue to attract top-tier candidates to that position. Dr. Look would have been considered that when he came in here, and certainly those before him,” he said. “… While this may tarnish that a little bit, I still think that we’ve got a great chance to bring in some top-tier candidates for that — and I think that’s kind of where our role is, is to help in promoting who we are and what our community is all about.”

Health rankings: Boyle healthier than most counties in Kentucky

Boyle County is among the healthier counties in Kentucky, according to the nationwide County Health Rankings and Roadmaps rankings released... read more