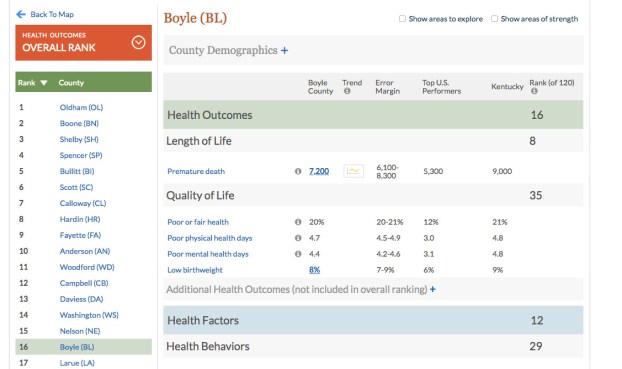 Health rankings: Boyle healthier than most counties in Kentucky

Boyle County is among the healthier counties in Kentucky, according to the nationwide County Health Rankings and Roadmaps rankings released this week.

Boyle is 12th among Kentucky’s 120 counties in the rankings for “health factors,” including things such as smoking, obesity, health care, education and environment. Boyle is 16th in the state for “health outcomes,” which considers how long people live and the local quality of life.

The rankings are released annually by the Robert Wood Johnson Foundation.

Boyle County is ranked eighth in the state for length of life — a component of the overall health outcomes ranking. The length-of-life rankings estimate how many years of life are lost to death prior to age 75. Boyle County residents lost an estimated 7,200 years of life per 100,000 people from 2014 to 2016 (the county has a population approaching 30,000). Oldham County was the best in the state in this regard, losing only an estimated 4,900 years of life per 100,000 people; Owsley had the worst rate, losing an estimated 17,500 years.

Other Boyle County stats from the county health rankings include:

• 20 percent of adults reported having poor or fair health in 2016.

• Adults asked in 2016 about their past 30 days of health reported an average of 4.7 poor physical health days and 4.4 poor mental health days — both numbers lower than the state averages.

• Eight percent of babies born between 2010 and 2016 had a low birth weight; that stat was higher for black babies at 10 percent.

• From 2010 to 2016, the unemployment rate in Boyle County decreased from 11 percent to 5 percent, following the national and state trend.

In a press release from the foundation, Julie Willems Van Dijk, nurse and director of County Health Rankings and Roadmaps, said, “The time is now to address long-standing challenges like child poverty. This year’s rankings are a call to action to see how these persistent health gaps play out locally, take an honest look at their root causes, and work together to give everyone a fair shot at a healthier life.”

To lean more about results for Boyle County and rankings for other Kentucky counties, visit countyhealthrankings.org.

Danville is moving forward with the process of having the Old Wilderness Road District, a historically African-American neighborhood, added to... read more