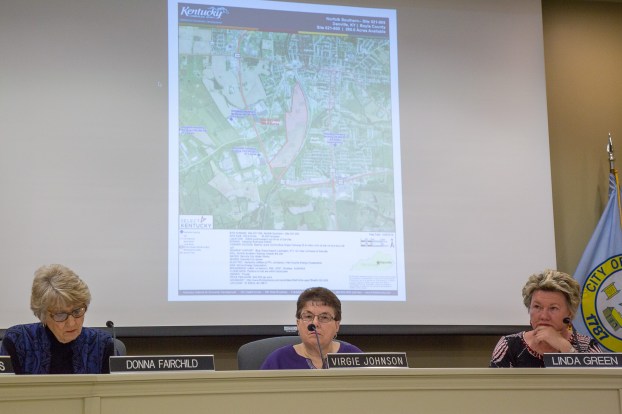 (Ben Kleppinger/ben.kleppinger@amnews.com) Board of Adjustments members, from left, Donna Fairchild, Virgie Johnson and Linda Green listen to testimony about "Project Eagle" while a map showing the proposed location of the project is displayed on a screen behind them.

The Danville Board of Adjustments has granted a building-height variance that will keep the city in the running for a prospective $100-million, 275-job industrial project.
If that sounds like something you’ve heard before, it’s because the board granted the same variance for the same project — but on a different piece of property — at its January meeting.
“It’s like ‘Groundhog Day’ here — you’ve seen this one already,” P&Z Director Steve Hunter told board members as he opened up the public hearing for the height variance.
Thursday’s hearing did in fact play out much the same way it had in January, right down to the motions made and the votes cast.
Board members David Anderson and Jesse Purdy supported a motion to deny the variance, but they failed 2-5. The rest of the board then supported a motion from board member Preston Miles to grant the variance and it passed 5-2.
The variance allows for a building up to 150 feet tall on an approximately 70-acre tract of land currently owned by railroad company Norfolk Southern and bordering Norfolk Southern’s rail line in west central Danville.
The local zoning ordinance includes a maximum building height of 60 feet in the industrial business development zone — something those speaking in favor of the variance said is an arbitrary “out-dated” and even an “antiquated” restriction.
The Danville-Boyle County Economic Development Partnership wants the variance so Danville won’t be eliminated from competing for a major project, code-named “Project Eagle.”
“The variance is a required condition of our local due diligence to assure the company that its building can be constructed on the targeted site as the list of candidate communities is narrowed,” a narrative from the EDP submitted with its variance application reads. “The company has already concluded an extensive series of interviews with state regulatory agencies in November 2017 to determine that the Commonwealth of Kentucky is a conducive location for its business operation.
“After the company’s qualification of Kentucky as a suitable jurisdiction for its location versus other states, then communities and sites meeting the company’s stringent criteria were selected. At the local level, the (EDP) has completed three complex questionnaires required by Project Eagle that each comprised more than 25 pages of responses and supporting documents detailing site, utility, environmental, regulatory, tax and community data.”
Project Eagle originally gained approval for the height variance at a site in the Stigall Business Center out Lebanon Road in west Danville.
“They were considering doing off-site rail access,” said Winfield Frankel, attorney for the EDP. “… After kind of revisiting that issue and (seeing) that this plot of land was actually available, they said, ‘well hey, why don’t we locate the whole project right next to the railway and cut out any sort of logistical issue with getting products to the rail line?'”
Public details about the project are few and far between; no details have been released about what the 150-foot-tall structure would be.
EDP President and CEO Jody Lassiter knows more about the project than he can say publicly; he’s signed a non-disclosure agreement in order to work on the project.
Anticipating concerns from the Board of Adjustments about approving a variance without knowing it would specifically allow, Attorney Frankel told board members the variance “is not a rubber stamp for this project to go forward.”
“This variance — I want everybody to understand — is simply needed so Danville and Boyle County, we’re not eliminated from the running,” he said. “… 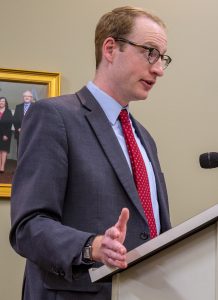 (Ben Kleppinger/ben.kleppinger@amnews.com)
Winfield Frankel, attorney for the Danville-Boyle County Economic Development Partnership, makes the case for a building-height variance for “Project Eagle” to the Board of Adjustments Thursday.

Without it, we’re going to be eliminated. But with it, we still stay in the running. We’re very excited about the project. … It’s a $100-million capital investment with the potential for 275+ jobs. That’s an enormous project for this town; I can’t remember anything in my recent memory that would even equate to this.”
Frankel argued there will be many other chances along the way, if Danville is chosen, for the community to learn more about the project details and decide if it’s appropriate or not. The company must comply with all local, state and federal regulations; and any proposed construction would have to clear the local Planning and Zoning Commission’s site plan approval process.
Frankel acknowledged the lack of publicly sharable details at this stage is “frustrating.”
“We’re really asking the Board of Adjustments to trust us that we’re not going to be recruiting or seeking out any sort of harmful industry for this town,” he said. “We live here; we love the town. We’re not going to seek out something that’s going to be harmful for it.”
Board of Adjustments member David Anderson asked if Frankel or Lassiter knows what the 150-foot structure would be, what the factory would discharge and if they had been to a factory run by the company elsewhere; they said no in all cases.
“Although we trust you and many of the people who have spoken with us, the beliefs that anyone here has are based on not knowing what it is, not knowing what it will discharge, not having seen one like it,” Anderson said.
Danville Mayor Mike Perros was one of four members of the public who spoke at the hearing. Perros spoke in favor of granting the variance.
Perros said he “takes comfort” because the Boyle County Industrial Foundation has “never brought anything into this community that has been harmful.” Previous problematic facilities such as the Corning glass facility were built long before the Industrial Foundation was around and even prior to creation of the Environmental Protection Agency, he said.
Perros said he also likes that the state has reviewed the project and thinks it’s a good one to have in Kentucky.
And “I take great comfort in what little I know about this company — I at least know where they’re from,” Perros said, indicating he has learned more about the project than is publicly available. “And I take extremely great comfort knowing where they’re from. Because where they’re from, they are more environmentally conscious than we are in this country.” 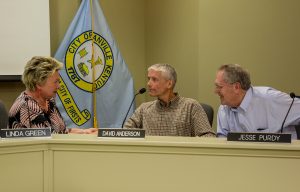 (Ben Kleppinger/ben.kleppinger@amnews.com)
Board of Adjustments members from left, Linda Green, David Anderson and Jesse Purdy talk after the conclusion of Thursday’s meeting. Anderson and Purdy voted against granting a variance for “Project Eagle;” Green seconded the motion to grant the variance.

Board member Purdy said a lot has been made of whether the 150-foot structure would be a “smokestack” and what it might put into the air, but he’s also concerned about emissions from industrial facilities at ground level.
Purdy pointed to the E.W. Brown Generating Station on Herrington Lake, which has made news recently for an investigation into whether a coal ash pond at the facility is polluting the lake.
“What are we getting into when we approve this? Is it going to kill the ground that they’re putting it on? Is it going to pollute the air?” Purdy asked. “… How about all the other things that can happen in the manufacturing process?”
Perros returned to the podium during Purdy’s comments, saying when Purdy was done that “I think a rebuttal is warranted.”
“This is not about KU (the owner of E.W. Brown), this is not about an ash pond, this is not about water quality, this is not even about whether it is or isn’t a smokestack,” Perros said. “… The word pollution here comes out of nowhere. This is about voting on a variance, and this is about neighbors who trust each other. I was born and raised here. I’ve been here 60 years. I am not going to let anything come into this community if I can do anything about it that’s going to be adverse to us. So with all due respect, let’s stay focused on what the issue is: It’s a variance on an antiquated ordinance.”
Board member Anderson said he is an economist, “so jobs are a big part of what I’m about.” He commended the EDP and local officials for succeeding in bringing jobs to the community, citing an 18-year low for unemployment.
But “90 percent” of the community’s jobs are not in manufacturing, he said. “They are in jobs that require … us to draw people here, they require people to want to come to our beautiful little town — restaurants, hotel, tourism, education, health care, banks.
“We’ve got a good thing going. And we have to be very careful, because none of us know what this is. None of us know what’s going to come out of it. None of us know what this structure is. So we’re really rolling the dice when what is at risk is a very good thing to begin with. So I think we should use caution.”
Anderson eventually made his motion to deny the variance, stating “we have a statutory requirement under state law that is not met here.”
“The findings of fact do not prove that this will not adversely affect the public health, safety and welfare; there is no evidence it will not affect the essential character of the general vicinity; we’ve seen no evidence that it will not cause a hazard or a nuisance to the public, and so by state law, our statutory requirement is to deny.”
Purdy seconded the motion, and it failed 2-5 with Purdy and Anderson voting in favor.
Board member Preston Miles then made a motion to approve the variance with the condition that “the project will comply with all applicable federal, state and local regulatory standards and permitting required for the operation of business.”
Board member Linda Green seconded the motion. 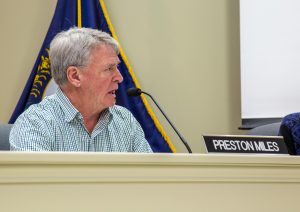 Anderson offered a friendly amendment adding a condition that the facility “cannot discharge harmful pollutants, or that it not be a smokestack, or both.”
Miles declined to accept either friendly amendment.
The variance was approved 5-2, with Miles, Green, Mike Lay, Donna Fairchild and Chair Virgie Green voting in favor.
You Might Like

A perfect storm —  Reason for mass incarceration is combination of many issues, says EKU professor

Kentucky is “noteworthy” because of its high incarceration rates, according to speaker Carolyn Dupont, who spoke this week at a... read more