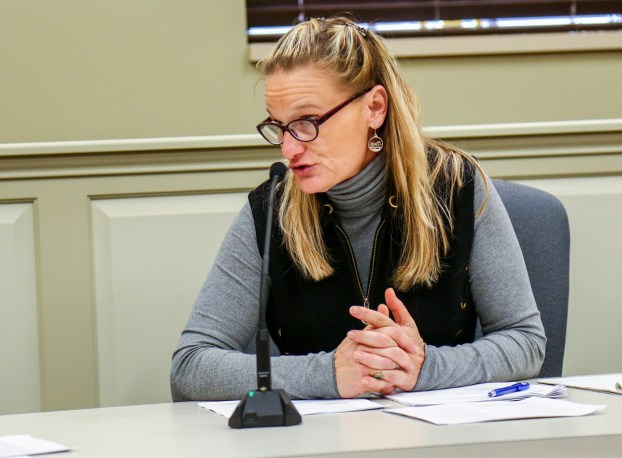 Joni House, Danville's preservation coodinator, speaks at a Danville City Commission meeting in December. House is working on a project to add the Wilderness Road District to the National Register of Historic Places. (File photo by Ben Kleppinger)

Danville is moving forward with the process of having the Old Wilderness Road District, a historically African-American neighborhood, added to the National Register of Historic Places.

Joni House, preservation coordinator for Danville, said Old Wilderness Road begins at East Main Street and curves around to Lexington Avenue. She said there are about 20 to 25 structuresbuilt between 1900 and 1920 along this route.

The Wilderness Road area is important to Danville for several reasons, she said. It’s one of the oldest districts in Danville and it’s on the main thoroughfare coming into the city, in addition to being historically an African-American neighborhood.

“We don’t have a lot of intact African-American heritage or cultural areas in Kentucky,” House said.

She said many African-American residents weren’t usually financially able to keep up repairs to houses in their neighborhoods “and a lot of them got torn down. Luckily this one has not. We have the ability maybe to preserve and make it more important than it is now.”

House said that by making it a historic district recognized at the national level, it will show the importance of the neighborhood to the cultural heritage of Danville.

Cultural Resource Analysts Inc. has been hired by the City of Danville to help develop the nomination forms to add the area to the register.

House said CRA will do a thorough building survey by listing the attributes each structure still has intact and figuring out which ones are historically significant to the district.

“That means, does it still have enough of its soul that it’s honest?” she said.

The interiors of each building will not be surveyed.

Every neighborhood has its own look. For example, houses usually have a certain setback from the road and follow the same form.

“As long as those things are similar, then they say the district is ‘intact,'” House said. “That’s what we’re really looking for.”

Currently, there are two houses in the Wilderness Road district that have been condemned by the city, but that won’t affect the historical significance of the area. “Historic preservation is a whole other animal,” she said.

House said just because a house is on the national register or in a historic district, “it really doesn’t provide it any protection.”

“If they get to a point where the city deems they’re beyond repair or out of compliance, then they can be condemned, whether they are in the historic district or not,” she said.

If the district is accepted to the National Register of Historic Places, property owners will not be bound by any regulations, House said — “It won’t affect them at all.”

House said the process of having the district named to the register will take at least a year of work. Information will be gathered on all of the structures and decisions will be made if they are contributing or non-contributing to the historic district. Then the nomination forms will be completed and sent to the Kentucky Heritage Council National Register Coordinator, who will then approve whether the district is worthy or not.

If it passes, the nomination will be presented in front of the Kentucky Heritage Council, which reports directly to the National Parks Service for inclusion as a district, House said.

“But it just depends on any hiccups we get into. You never know. It’s a governmental process.”

House said she is looking forward to getting out on Wilderness Road to help survey the buildings and hopes to meet many of the residents.

“I like getting to know the people. That’s what really makes its own little cultural area,” she said. “There’s a lot of history there. That’s the fun part of this. It gives you an idea of what Danville was in the past and how it got to where it is now.”

The Danville Board of Adjustments has granted a building-height variance that will keep the city in the running for a... read more