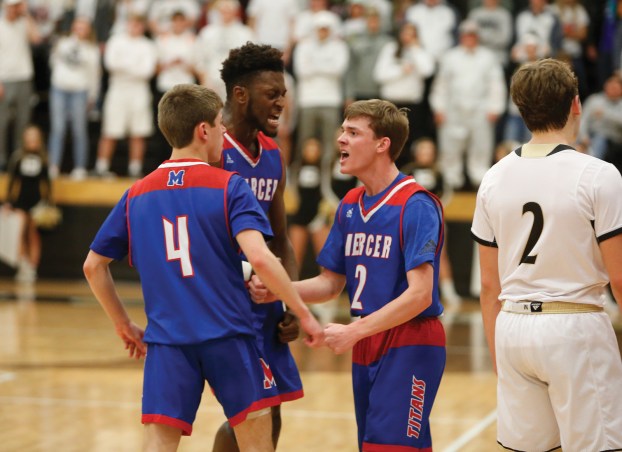 Trevon Faulkner is the Advocate-Messenger All-Area Player of the Year.

It’s another accolade for the Mercer County senior, who earlier this week won Kentucky Mr. Basketball, the highest individual honor in the state.

Faulkner again led the Titans this season in points and rebounds per game. For his career, he’s one of seven players in Kentucky high school basketball history with more than 3,000 points and 1,100 rebounds.

“He’s a kid who has done it in the classroom, does it on the football field,” Mercer head coach Josh Hamlin said. “He doesn’t miss school. The things he does off of the floor just shows the work that he puts in on the floor. Everything Trevon Faulkner gets, he deserves. He’s not a kid who wants to hear about how good he is. He’s said multiple times, he’d trade Mr. Basketball to be playing at Rupp Arena. That shows how selfless he is.

“He’s going to be a big part of our program even though he’ll be at Northern, because you’re going to teach and talk to younger kids about the work ethic of the best player to ever come through Mercer. If he works that hard, why can’t you?”

Faulkner is committed to Northern Kentucky University to play basketball in college.

The 12th Region will be happy to see the back of Faulkner, but his ability on the court — along with Mercer County’s Miss Basketball winner Seygan Robins — can’t be overstated.

“Honestly, myself included, I think that the area have kind of taken what Seygan and Trevon have done over the last five or six years and say ‘oh, it’s just another night for Trevon,’” Hamlin said. “Some of the things they did on a night in, night out basis. Trevon scored 47 and you’re saying ‘he could’ve scored 50. He could’ve scored 60.’ And you’re talking about a high school kid.”

Hamlin said he’s noticed the effect that Faulkner has had on the program already — particularly at younger ages.

“The example you set off of the court is being watched by so many eyes that you don’t even know, little kids looking up to you,” Hamlin said. “Being at the middle school, you’ll hear ‘man, did you see Trevon’s dunk last night?’ The impact that Trevon had, kids in Mercer County are wearing arm sleeves because Trevon wore an arm sleeve. They want to be No. 12 because Trevon was No. 12. He loves the kids, he loves that. He’s such a good role model.”

Gillis and Southerland are the lone seniors on the second team, and even more underclassmen make up the area honorable mentions. Basketball is looking up in the area, Hamlin said, despite a strong senior class graduating.

“I’ve had numerous coaches reach out and say ‘we really enjoyed coaching against (Faulkner), but we’re glad he’s gone,’” Hamlin said. “I think that’s the ultimate sign of respect. I’ve said it all year, the 12th Region is one of the most competitive in the state, evidenced by the region tournament this year. Every year it’s a dog fight to get in, it’s a dog fight to get out. It’s going to be the same in the years going forward.

“The region has a lot of young talent coming up, and we’re glad there are some seniors graduating too. As coaches, you never want to see your best players and seniors leave, but you know that other coaches are doing the same thing. It’s just an opportunity for other kids to step up and start writing their own chapter of their time with us. We’re looking forward to that.”

Votes were placed by area coaches and media. Honorable mention given to players who received votes

LEXINGTON — Seygan Robins has had a good week. The Mercer County senior led her team to back-to-back state championships on... read more