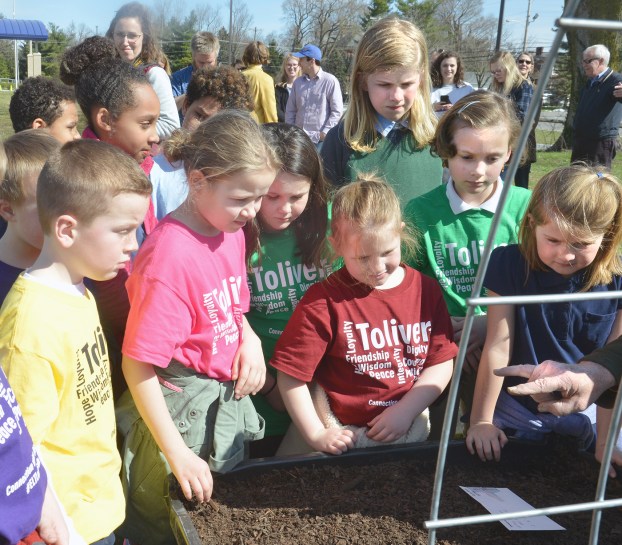 everal Toliver Elementary students watch Zeismer's hand as he shows how to measure about 3 inches between seeds when planting by using their pointer and pinky fingers.

Thanks to four Centre College students and one “local garden hero,” two community gardens had their first seeds planted and were dedicated Friday afternoon to the people who will watch them grow and enjoy their produce.

Both container gardens — each made up of six containers, complete with large metal arching trellises — are located at Morning Pointe of Danville, an assisted living facility, and Edna L. Toliver Elementary School.

As part of their food ag class at Centre, seniors Margaux Crider, Anna McCauley, Moses Ngong and Beka Bruner, were tasked with finding a connection with the Danville community that somehow incorporated food, agriculture and sociology.

At the same time, local gardener Bob Ziesmer, who is part of a developing community garden coalition, wanted to plant a garden at Morning Pointe.

So both projects were combined. 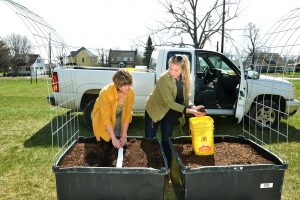 Over the past several months, Crider, McCauley and Ziesmer have been meeting with Morning Pointe residents once a week to discuss issues such as food heritage and how agriculture practices have changed over the decades. They also heard stories from some residents about their memories of working in Victory Gardens during World War II.

Eventually the discussions turned to what fresh foods they would like to see growing right outside their door and what would taste good, like tomatoes, cucumbers, green beans and crunchy lettuce for their salads.

Ziesmer found people and businesses to donate the containers, dirt, mulch and seeds. He even made the trellises out of cattle fencing, for pea and bean vines to climb on. 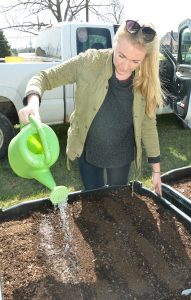 On Friday, Crider and McCauley, under the direction of Ziesmer, planted the first peas, radishes and green onions. However, it was a bit too nippy for the residents to help out and get their hands dirty. Ziesmer laughed and said some of them wanted to just watch but not work because they spent years laboring in gardens in their younger days.

A few minutes later, just down the road, another garden was dedicated at Toliver.

At the dedication ceremony in front of several elementary students, parents and teachers, Bruner said, “Back in August, Moses and I were presented with a class opportunity to be able to engage more with our community and form relationships and give back a little more, especially since the Danville community has been so welcoming to us as Centre students.”

Bruner said, “We truly believe that it’s so important for kids to know where their food comes from and how to grow their own food.”

They formed a committee, wrote grants, found sponsors and “Ta Da, we have the garden!” Bruner said.

By next school year, Bruner and Ngong will have graduated, but their hopes are to have four more containers and have all 10 of them placed on the playground, in addition to an in-ground garden. 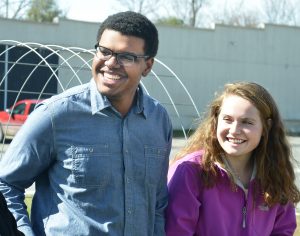 “The purpose is to have the kids interact with the garden every single day when they go onto the playground,” Bruner said.

In addressing the crowd and thanking everyone who helped with the project, Ngong pointed and said, “Bob (Ziesmer) is a character who’s been supporting us every step of the way. He became a second grandfather to me.”

Right before the end of the ceremony, Ziesmer said, “My friends who have worked with me from Centre would like to see every house have their own garden. Kids, let’s plant something!” 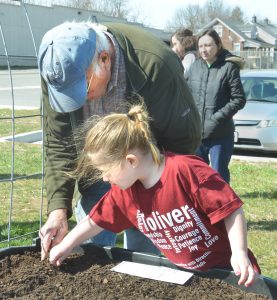 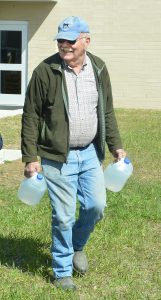 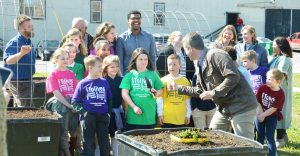 Elementary students, Centre students and faculty get ready to pose for a group photo after dedicating the container gardens. 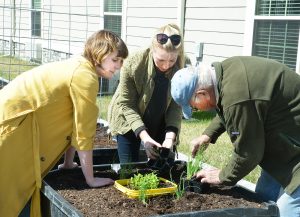