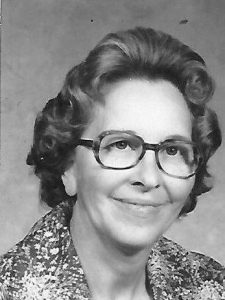 Christine Ezell Bottom, 90, passed away Saturday March 17, 2018. She was born in Madisonville, Kentucky on October 2, 1927 a daughter of the late Vonnie T. and Rose Frances Pierce Ezell. Christine was married 63 years to the late Arnold “Boots” Bottom who passed away in 2014.

Christine was a homemaker and member of Beech Grove Baptist Church where she enjoyed teaching Bible School and being involved with the children’s ministries.

Along with her parents and husband, Christine was preceded in death by three brothers, James, Robert, and William Ezell.

The funeral service will be 2:00 p.m., Tuesday March 20, 2018 at Beech Grove Baptist Church with Bro. Bobby Estes officiating. Burial will follow in Beech Grove Church Cemetery. Visitation will begin at 11:00 a.m., Tuesday, also at the church. Walden Funeral Home Perryville is entrusted with the arrangements.