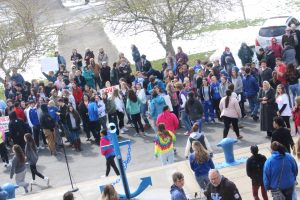 Going to school is a privilege that all American children are lucky to have, even though some may groan from the late nights of homework and waking up in the early hours. School is a place for teaching and learning, a place of peace.

As of 2018, this has changed. According to CNN as of March 8, there have already been 14 school shootings. This averages out to be a school shooting for every five days. So, who’s next?

Students across America have been standing up for this important topic — most recently by participating in a student-led walkout that was held on March 14. Students, teachers and community members met at Danville High School to participate and show their views on this terrifying topic. 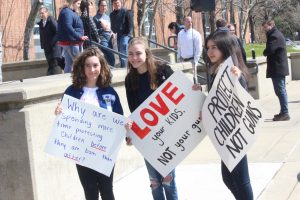 The DHS Walkout was run by a political club, Junior States of America, but the student body as a whole participated, with some who created signs and others who made T-shirts to let politicians know exactly how students feel. The club’s president, Katie Critchfield, started the 17-minute walkout by explaining how it represents the 17 people who lost their life in the tragic Parkland shooting in Florida.

Student Corbyn Denson followed Critchfield by reading the names and sharing a little about each person who lost their life in Parkland and Marshall Counties. She then asked people in the crowd who represented the characteristics of each person to step forward. Once the 19 people stepped forward, the gathering knew that they represented the lives lost in the two school shootings. 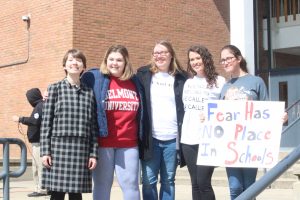 Two additional speakers, Sadie Price and Caroline Bugg, also spoke on the topic very passionately. They told about the importance of standing up for what we believe in to show our government that there is something that has to be done when it comes to guns and school violence.

With many students around America protesting the outrageous fact that our government is doing nothing to try and protect our lives, walkouts and demonstrations make known that this generation won’t just sit around. We will be active whether by social media, walkout, or marching right up to the president’s house. Our generation will be heard and we demand a change. 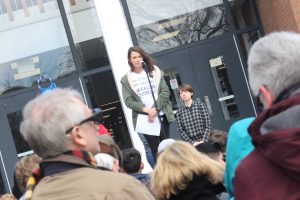 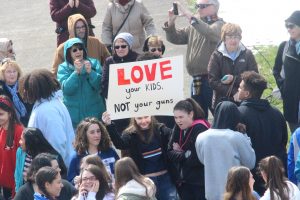 Students across the country have felt the aftermath of many shootings the past few months, as everyone is trying to find whether this should be addressed through gun control or other outlets. With there not being a definite answer nor an immediate solution, many students fear simply going to school. Danville High School participated in the National Walkout on March 14.

Caroline Bugg, a member of JSA, explained that this walkout was to make us more unified.

She said, “The more connected we are, the easier it will be to recognize if someone is going down the wrong path.” She felt this walkout was a way to show we are together regardless of the issues that are extremely prevalent throughout the country. Shivani Patel also agreed that it was necessary, stating that “we have to show that something needs to change it [gun use]. It needs to be addressed.”

Although the walkout wasn’t exactly a protest, it allowed the school to be one together. The school administration shows their support by allowing this walkout to happen as they stand literally or figuratively with their students.

Natalie Grubbs, a junior, is upset that she even HAD to partake in this.

She believes she is “SIxteen and taking more action than a lot of people actually in the government.”

While perhaps this won’t truly change anything, students are hoping to show their disdain for the issues apparent and not being addressed.

“It’s hard to make a change as a high schooler, but I’m trying to do what I can and hope congress steps in and does what they can, too,” Grubbs also said.

Consistently, students seem to agree that they are just trying to make a change by doing their part, which may be small but is the best they can.

Freshman Sierra Young believes “School shootings could be prevented by schools doing something to get students more involved in social interaction.”

Another freshman, Makyah Chenault, said, “The walkout done today was not the way I wanted to have my voice heard.” She wishes she “could’ve spoken her mind.”

Although many didn’t get to speak up, it’s clear many students believe in the concept of a walkout to stand up for what they think needs to be addressed, but perhaps there are more effective ways to do so than the way the walkout here was done.

While everyone was not required to participate in the walkout, many students planned to just to show that they want change. Hopefully with movements like this happening across the nation, a change in gun use will happen.

It would seem that in the current time and state of Kentucky’s economy, that state pensions are a hot topic of debate. This would heavily associate with those who serve our nation’s youth. This is a crucial blow to them and quite possibly our students; if the teachers become apathetic, the students who look up to them shall fall into the same pool. The state´s mistake has been marked by this cut of pensions; it shows a clear apathy towards our state´s youth and their primary source of education.

These culminations of events have already been seen to cause radical events and strikes in states — a recent example would be that of West Virginian teachers who went on strike when a pay raise was refused. This constant lack of care or empathy in mid-south eastern states is profoundly visible and it would appear that teachers will no longer stand for it.

A second example of these events would be earlier in the year, when a teacher in Louisiana was forcefully removed and detained for her daring to speak against the school board and the quite obvious wage gap in between the teachers and staff when compared to that of the school board, specifically the superintendent.

If one truly cares about our schools, teachers and most importantly the students, they cannot stand idly by and allow injustices and unfairness to take control. As all things in history, these injustices shall be conquered; one would be wise to make sure that they are on the right side.

The classroom connected to the real world By HAYDEN SHEPHERD  BCHS  The entrepreneurship class at Boyle County High School is... read more