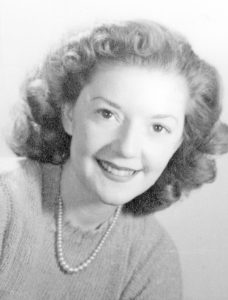 Irene was born in Stanford, Ky. on Nov. 25, 1916, to James and Belle Stephenson. She graduated from Danville High School in 1935 and met her late husband, George Griffiths, while he was a student at Centre. After World War II, Irene and George lived in Pennsylvania, New Jersey, and Connecticut. She dedicated her life to raising her children and supporting her husband. After their retirement forty years ago, they returned to Danville where they remained for the rest of their lives.

In addition to her parents and husband, Irene was preceded in death by her sisters, Virginia Bicknell, Annabel Knuckles, and Gloria Woodson; and her brother, James Stephenson.

Irene’s cremains will be buried next to George in an informal ceremony at Bellevue Cemetery on Wednesday, March 21 at 1 p.m. “I realized when you look at your mother, you are looking at the purest love you will ever know.”

Memorial gifts are appreciated and may be made to The Kentucky United Methodist Home for Children, 1115 Ashgrove Rd., Nicholasville KY 40356. www.kyumh.org.